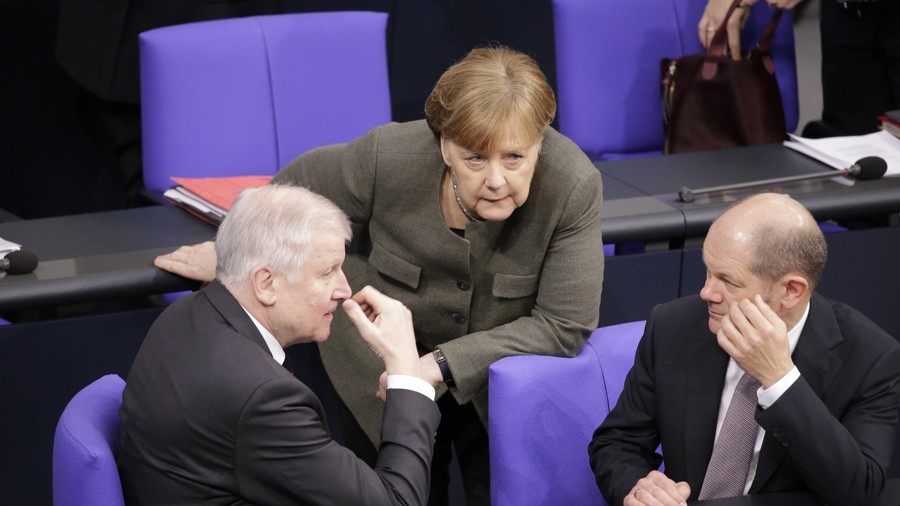 The ink has hardly dried on the coalition agreement between Germany's CDU, CSU and SDP coalition government partners who finally agreed to form a new government after six months of wrangling following an inconclusive election, than the government leader engages in a bitter dispute with a key minister and a crucial ally. Such conflicts may prove fatal to the futures both of the ruling coalition and its members.

Days after German Chancellor Angela Merkel’s was sworn in for a fourth term and her ministers took their oaths of office, the perceived harmony (perceived by whom we wonder?) in Europe’s leading economic power was again disrupted – this time by newly appointed interior minister Horst Seehofer, who is also the leader of Merkel’s longstanding Bavarian allies the Christian Social Union (CSU). Seehofer provoked another bout of controversy by saying that “Islam does not belong to Germany, as we reported a week ago.

The minister’s statement immediately drew a rebuke from Merkel, who said that “Islam has now become a part of Germany.”

This provoked a barrage of criticism from CSU members and other German parties in the Bundestag. More significant, however, is that it seems to have revived an old dispute that has plagued the relations between the two German “sister-parties” and their leaders for several years.

Seehofer previously served as prime minister of the German federal state of Bavaria for some ten years. At the height of the refugee crisis, the south-eastern state found itself on the front line, accepting the massive inflow of asylum seekers travelling to Germany via the so-called Balkan route. Being the second-most populous German state, Bavaria also had to take in one of the largest quotas of refugees that came to Germany.

As a result of these developments, Seehofer seems to have adopted a much more hardline stance on immigration than Merkel, who stubbornly refuses to abandon her decision to open Germany's borders to criminals, beggars, the illiterate, people traffickers, members of organised crime networks and terrorist groups and general dickheads without carrying out any background checks or even asking for a valid passport or national identity card. For three years, the CSU leader has been regularly slamming his ally for her ‘open door’ policy. He has also long demanded a cap on new arrivals alongside with much stricter immigration controls.

Even though the CDU/CSU union won the most seats in the Bundestag at the last election, it still suffered a major setback by gaining just 33 percent of the vote, an all-time low in terms of public support since 1949. As a result, Merkel accepted some of Seehofer’s policy demands – including the refugee cap – but noe The Chancellor seems to be backsliding on her agreements and returning to the EU Commission's plan to flood Europe with cheap labour.

While mainstream media was hailing the political mastery of Hausfrau - Volksfuhrer Merkel in negotiationg a new coalition deal to keep her in power for another four years, after Germany had been without a government for almost six months, The Daily Stirrer (and other alt_news sites to be fair) warned that the new government of Europe's most powwerful economy was fragile and full of holes. Only days after Merkel was sworn in for a fourth term, the holes in her coalition started to appear ... Continue Reading">

German Election: Will Another Term For Merkel destroy German Economy
According to the latest round of opinion polling ahead of the German elections, Angela Merkel looks set to become the joint longest-serving modern German chancellor, that’s despite having been accused of "putting problems on the back burner, and staved off several attempts to indict her on treason charges for her role in the immigrant crisis. Business organisations have also raised doubts about the economic consequences of re-electing her, warning that her new term may bring “stagnation” for Germany.

There appears to be no end in sight to Germany's crisis of democracy as the European Union's most populous and economically powerful state continues to stumble along without an effective government. Coalition talks between Chancellor Merkel's CDU/CSU and the left wing Greens and classical liberal Free Domocrats have stalled over irreconcilable policy demands.

Germany Sees Fourfold Rise in Terrorism-Related Cases
According to a report in the Welt am Sonntag, Germany has experienced a huge rise in the number of terror-related cases in just one year, with prosecutors having dealt with more than 900 cases so far in 2017, compared with 250 cases initiated throughout 2016. Around 700 Islamic extremists now living in Germany have been identified by the Federal Criminal Police Office (BKA) as posing a potential terror threat.


A Week Before Election 30% Of German Voters Still Undecided
Polling companies in Germany are indicating that support for Chancellor Angela Merkel’s conservative Christian Democratic Party is still slipping with the election only one week away. More disturbingly perhaps for Hausfrau - Volkfuhere Merkel is the news that over a third of Germans are still unsure how they will vote. An opinion poll published today (15 September) on Friday showing the number of undecideds was not coming down fueled uncertainty about the kind of coalition that will emerge from an election on September 24.


Merkel Faces Crisis As German Ruling Coalition Collapses
German Chancellor Angela Merkel faces a crisis in her ruling coalition after Bavarian Premier Horst Seehofer demanded she take steps to halt the tide of illegal immigrants entering the country. To have any chance of surviving, the government must present new initiatives for controlling illegal immigration, deal with the critical situation on the Austrian border ...

Reports that German Chancellor Angela Merkel has agreed a proposal from coalition partner and leader of the Christian Social Union (CSU) Horst Seehofer to limit the number of asylum seekers in Germany to 200,000 per year to secure a ruling coalition may be somewhat premature. Other coalition partners are not as positive on the policy.

German Elections: Anti - EU party AfD 3rd In Polls
Elections take place in Germany this Sunday, September 24, for the federal assembly (Bundestag) and the presidency (Chancellor). While Angela Merkel looks set to win a fourth term as Chancellor and the most likely outcome of the election is another "Grand Coalition" between Christian Democrats and Social Democrats that coalition will be a much-weakened if late polls are to be believed.

A hundred Islamists are now openly enforcing Sharia law on the streets of Berlin, according to German police officers who are investigating a recent string of violent assaults in the German capital. The self-appointed religious police consist entirely of Salafists (Muslim fundmentalists) from Chechnya, a predominantly Sunni Muslim region in the Caucasus. The vigilantes are name-and-shame tactics and physical violence to intimidate Chechen migrants and dissuade them from integrating into German society;

The US government has been making preparations for a possible war against Russia in Europe’s Baltic States, German business newspaper Deutsche Wirtschafts Nachrichten (DWN) reports (link goes to page in original German). The report claims that all the NATO war games organized in the region by Washington have been intended to prepare various military response scenarios.


U.S. To Station Nuclear Weapons in Germany Against Russia

Germany’s ZDF public television network reported on September 22nd, "New U.S. Atomic Weapons to Be Stationed in Germany," that the U.S. will station 20 new nuclear bombs in Germany, each being four times the destructive power of the one that was used on Hiroshima . Hans Kristensen, the Director of the Nuclear Information Project at the Federation of American Scientists, says, "With the new bombs the boundaries blur between tactical and strategic nuclear weapons.”

Watershed Moment In US – EU Relations, Merkel Says Europe Can No Longer Rely On America

Only hours after Donald Trump infuriated Angela Merkel and the rest of his G-7 peers by refusing to endorse the Paris climate treaty, the US President has done it again. Hausfrau Volksfuhrer Merkel has now decided Europe can no longer rely on the USA to commit military support to EU nations that do not pay their NATO subs, should they come under attack.

Brexit: Is Germany Dictating to Britain How We Will Trade With The World After-Brexit?
Germany offering Britain post-BREXIT access to the European market for an annual “fee”! Who do these sausage scoffers think they are? The German government might like to pretend otherwise but there are twenty six other EU member states involved in negotiating any post – Brexit trade agreement with the UK, and Germany is not overly popular with many of them.

Tensions between the UK and Europe escalated overnight after EU negotiators increased their demand for compensation from Britain’s for the anticipated effects of Brexit to €100 billion, (You can imagine Juncker and Barnier, dressed in Mao suits, sticking little fingers in the corner of their mouth and in silly voices intoning “One – hundred – billion – Euros.) This latest attempt to bully Britain has only served to widen the divide between Brussels and London.


Non Germans now outnumber Germans in the city of Frankfurt, for the first time in a German city more than half of Frankfurt residents now have a migrant background, according to data from the city’s Office of Statistics and Elections.
Figures show that 51.2 per cent of people living in Frankfurt have a migrant background, the city’s secretary of integration Sylvia Weber said: Well that sounds like a recipe for conflict.

After years of blythely ignoring years of economic stagnation, social deterioration, and an unemployment rate which stubbornly refuses to fall below double-digits for countries like Greece, Spain and Italy, Europe appears to have finally been shocked into recognising the reality of its situation by Brexit and the Trump election in the USA. Bureaucrats have responded with their usual tactic, scaremongering.

Somali Rapist Was Not Deported: Rapes Again.
As she campaigns to be elected leader of The Conservative Party and thus Prime Minister, Theresa May glibly promises to be firm in maintaining law and order and to address the problems caused by mass immigration by reforming immigration laws and enforcing border controls. But can she be trusted?

Are the Bilderberg Group meeting, this weekend in Dresden, Germany, really The Shadow Government (the New World Order, The Illuminati,) that rules the world? For years the Bilderberg Group denied its own existence. Now thanks to the diligent work of dedicated investigative journalists we know it is real, yet many ‘liberals’ ‘progressives’, globalists and university dumbed down idiots still insist it is all a conspiracy theory.

BoJo Was Correct – The EU Was A Nazi Idea
The biggest kerfuffle in the EU referedum campaign this week came when the University dumbed Down and brain dead, Labour voting sheeple got their knickers in a twist over comments Boris Johnson made about the E U having originally been a Nazi idea. Boris was accused of misrepresenting or exaggerating the comparison between the EU and the German Nazi’s plan for a union of Europe.

Will Merkel’s Migrant Disaster Drive Germany’s AfD Into Power?
Results from local elections held in Germany last weekend indicate that German Chancellor Angela Merkel is in deep trouble. Her party, the Christian Democrats is losing votes to opponents from the right and left, largely because of the illegal immigrant crisis brought on by Merkel’s crazy ‘open doors’ immigration policy which ahas resulted in Germany admitting criminals, terrorists and many illiterates,