Over-50s could get a FOURTH Covid jab in autumn to fend off NHS winter crisis as Omicron drives up new cases and hospital admissions the Daily Mail reports.

Over-50s are set to be offered a Covid booster jab as early as autumn it was revealed yesterday as health authorities planned the latest 'fightback' against a surge in the number of non - lethal asymptomatic infections by the latest COVID variants.

Around six million people classed as vulnerable or at risk are understood to be in line for a fourth shot as the latest sub-variants of the Omicron strain continue to rapidly spread. However the push to inject people with the non - immunising, highly lethat 'clotshot' will be extended to the over 50s accoring to government sources.

Outbreaks across Europe are being fuelled by Omicron sub-variants BA.4 and BA.5, which are thought to be even more infectious than the BA.2 strain that caused infections in the UK to spiral to a record 4.1million in April. Unfortunately for the scaremongers a little research reveals this latest fear and panic campain to be another hoax.

Yesterday’s ONS publication on all cause deaths by vaccination status potentially gives some new insights into what is behind the recent increase in all cause mortality in England following the Spring boosters.

In particular it appears to show that the relative mortality of the vaxed (vaxed mean any dose throughout this post) relative to the unvaxed has worsened since the Spring boosters started (between March and May), although that’s a trend that has been happening for some time. And so the recent high all cause mortality has a significant component related to vaccine damage.

Here is a chart of the relative all cause mortality, measured using monthly age standardised mortality (ASM) from yesterday’s ONS publication. ASM adjusts for age differences between vaxed and unvaxed and reflects deaths mainly in the older population where most deaths happen.

However non-covid mortality in May 2021 was similarly higher in the unvaxed relative to the vaxed at 1.87 times the rate (ASM per 100,000 of 1,673.4 vs 895.4). Given that an experimental vaccine can’t help with non-covid deaths (noting that there has clearly been no under-recording of covid deaths from when vaccines started) the higher all cause death rate in the unvaxed is not due to any vaccine efficacy.

So the higher rate of mortality in the unvaxed is probably due to the ONS significantly understating the unvaxed population or a selection effect because the general health of the unvaxed is much worse than that of the vaxed. This health (or terminal illness) explanation is unlikely to be the reason as the Norman Fenton etal paper showed as in practice it was the most vulnerable who were vaccinated first.

Some would say we shouldn’t try to unpick the ONS data because it is clearly wrong as indicated above; a reasonable viewpoint. I take a different view. I suggest we should ignore the absolute ONS mortality rates (for reasons implied above) as they likely incorporate an understatement of the unvaxed population. So the current 1.06 rate doesn’t mean the unvaxed are (adjusted for age) dying at a 6% higher rate than the vaxed. And we need to be careful with misallocated deaths occurring in the vaxed in the first few weeks after first vaccination (for reasons Clare Craig and others have given). However if we look at changes to the relative rates of mortality for periods after most of those first vaccinations in those most likely to die have happened then we can glean some information.

In particular the fall in the relative rates of all cause mortality in the unvaxed vs the vaxed from March 2022 to May 2022 is tentative further evidence that the Spring boosters have caused significant damage, rather than the high mortality just being about lack of access to healthcare due to the disastrous pandemic response that affects both vaxed and unvaxed alike.

This post is based on my first glance of yesterday’s ONS publication. So I may have made a mistake somewhere. And if anyone spots anything wrong with this logic then I would be interested. 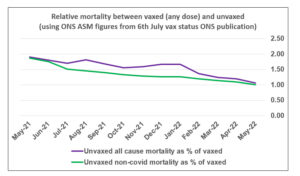 23 Serptember: France's 'Yellow Vests' protesters are back. Anti Macron activists rally in Paris
Frence's Yellow Vests protest movemen, which featured regularly in our pages in 2018/19 are back. In truth they never went away, Initially formed to protest against rising fuel prices, the rising cost of living and President Emmanuel Marcon's authoritarian style of governing have now added lockdowns, vaccine passports and mandatory vaccination to their list of grievances..

21 Sepenber: "F**K The Jab, Long Live Australia" - 20,000 Shut Down Melbourne Highway In Massive Lockdown Protest
23 September: Anti-lockdown protests have become commonplace in Australia since the latest round of lockdowns began two months ago although you wouldn't think so if you rely on mainstream media for information. Newspapers and broadcast news channels have almost totally blanked stories reporting the pushback against the government's authoritarian measures which now have little to do with COVID and a lot to do with trying to crush the traditionally cussed spirit of Australians

France: Thousands of Health Workers Who Refused Covid Vaccine Mandate Suspended
September 17: The French government have today suspended 3,000 health workers who have defied a manadte requiring all medical personnel to be vaccinated against COVI|D, The Guardian reports. Announcing the move France’s health minister said that many have since agreed to be inoculated now that they had seen “the mandate was a reality”.