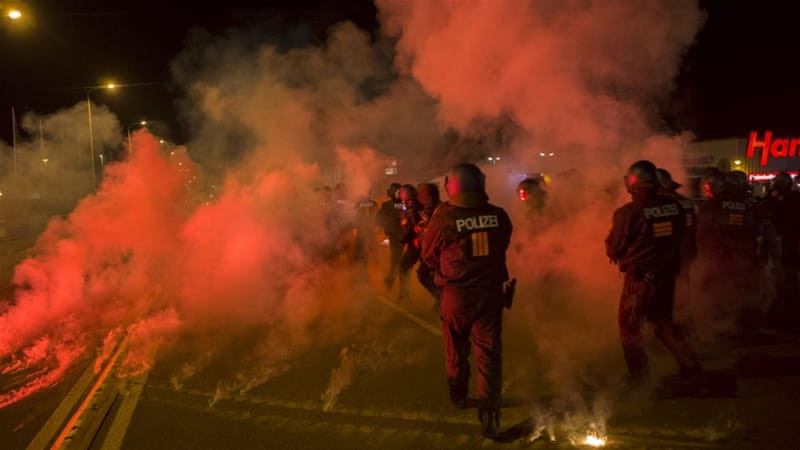 Only days after Hausfrau Lardarse von Merkel showed her contempt for German voters by announcing Germany would welcome all Syrians arriving at their borders without requiring any legal vetting process (this would include rapists, murderers, head amputators, torturers, people of the Islamic faith who will burn another human being alive simply because they are the wrong sort of Muslim and general cunts), thre was further evidence of the drift towards civil unrest in German cities.

A school sports hall converted into an emergency refugee shelter caught fire in the German town of Nauen, in what police suspect was an arson attack. The hall in the eastern town, located 15km west of the capital Berlin, had been redesigned to house about 130 asylum seekers, who were awaiting transfer to permanent housing locations. Police in nearby Potsdam said that the fire spread soon after it was discovered, leading them to believe the incident may have been planned.

Only last week we reported two fires in refugee hostels in Germany. One was linked to anti - immigration protests, the other was thought to have been started after a tribal squabble betweem migrants from different African tribes.

Far-right protesters (i.e. reasonable people who want border control laws that exist for the protection of German citizens enforced) have repeatedly demonstrated against the arrival of asylum-seekers in Nauen this year.

German Chancellor Angela Merkel is to visit a refugee shelter at the centre of recent riots by neo-Nazis, an official said on Tuesday. Merkel will travel to Heidenau, south of Dresden, on Wednesday to meet refugees, support workers and local officials, her spokesman, Steffen Seibert, said in a statement.

Dozens of police were injured when a far-right mob hurled bottles and fireworks at officers trying to ensure asylum seekers could move into the repurposed hardware store in Heidenau on Friday and Saturday. Speaking on Monday, Merkel called the latest incident "shocking" and "shameful." She is wrong, what is really shameful is the way she and her government have marginalized German working class people and long established, fully assimilated immigrants in order to serve the New World Order Agenda 21 which calls for the replacement of European majorities in western nations by third world immigrants.

Rather bogged down with real life today so here's a roundup of the days posts:

As the climate change scare becomes more and more exposed for the money making fraud it always was, they green weirdie beardie, rope sandal wearing tree huggers get more hysterical and stupid in their arguments that we must all return to medieval lifestyles, the billionaires like Al Gore who hope to profit from it keep flogging the dead horse and the angrier and more vicious the left wing hate mobs become in their witch hunts.

Italy’s coastguard on Saturday led an operation to rescue around 3000 migrants from the waters of the Mediterranean after distress calls were picked up from more than 20 overcrowded vessels drifting in waters off Libya. In the biggest single-day rescue operation to date there were no reports of casualties. Reports have been coming in however of hundreds of life jackets and other items being washed up along a stretch of coastline, which suggests the naval rescue flotilla may not have reached al the stricken boats in time.