Everybody who has their brain turned on in the USA, and many of us looking from the real world as impartial observers was gobsmacked last week when FBI director James Comey, in a totally damning statement announced that although there was incontrovertible proof former Secretary Of State Hillary Clinton had committed various crimes relating to national security but in the circumstances "no reasonable prosecutor would bring charges against the Democratic Party Presidential candidate.

Strangely, just before the FBI announced they were dropping the case after a year long investigation involving over 100 officers, Hillary's hubby, former president and ongoing serial sex pest Bill Clinton 'accidentally' met US Attorney General Loretta Lynch on the tarmac and an airport in Arizona. The Clintons are well acquainted with Lynch so was it just a friendly chat that led to 'Crooked Hillary' or did something more sinister happen.

Who knows what happened when Bill met Loretta. Well one State Department whistleblower claims to know. (Image source: teejaw.com)
Official narratives said the pair had an innocent social chat (as one would expect the official narratives to.) Today however, a story being widely circulated on the internet throws some like on what might really have happened:

Attorney General Loretta Lynch was threatened by Bill Clinton, according to a Department of Justice source, which then set in motion an ‘obvious and ridiculous’ chain of events that culminated in Hillary Clinton being let off the hook, despite FBI Director James Comey essentially stating that she broke the law.

The chain of events was so ‘ridiculous’ that the beleaguered Attorney General Loretta Lynch even attempted a joke, saying that she wished she knew “where the lock on the plane door was” when Bill Clinton was striding along the tarmac toward her plane.

“Loretta was shitting bricks after that meeting. Suddenly we had a whole new strategy, and things moved fast.”

“I can’t believe people can’t see it for what it was, it’s so obvious and ridiculous,” the Department of Justice insider said.

“It was just a f***ing mess in the Department. Everybody, including the FBI, did a U-turn.”
Congressman John Mica also referred to the “fishy” nature of the chain of events while questioning FBI Director John Comey about the scandal in the House of Representatives.

“My folks think there is something fishy about this. I’m not a conspiracy theorist, but there are a lot of questions on how this came down.”


RELATED POSTS:
Clinton versus Trump in US election
Were Democrats primaries rigged for hillary Clinton
Hillary Clinton with deliver tyranny to USA
Clinton voter fraud
How The Clinton Foundation Made big Money Off Poor Haitians

The FBI's Decision Could Help Trump
Trump Questions if Bill Begged Lynch to Spare Hillary During Tarmac Meeting
US Media Bias Revealed As Political Fact Checkers Caught Covering Hillary Clinton Crimes
Is Putin Ready To Expose Hillary Emails?
FBI Vows To Go Public If Obama Blocks Indictment Of Hillary
Assange Says Wikileaks will publish ‘enough evidence’ to indict Hillary Clinton.
Can this woman possibly be a fit and proper person to serve as President Of The USA
Wall Street 'Whistleblower' Exposes Clinton Foundation Fraud
Obama's Economy Is Bad; Clinton's Would Be Worse
Lifelong Feminist Camille Paglia Slams Hypocrite Hillary Clinton And Her 'Liberal' Supporters
If You Are An American Voter Thinking Of Voting For Hillary You Need To Read This. 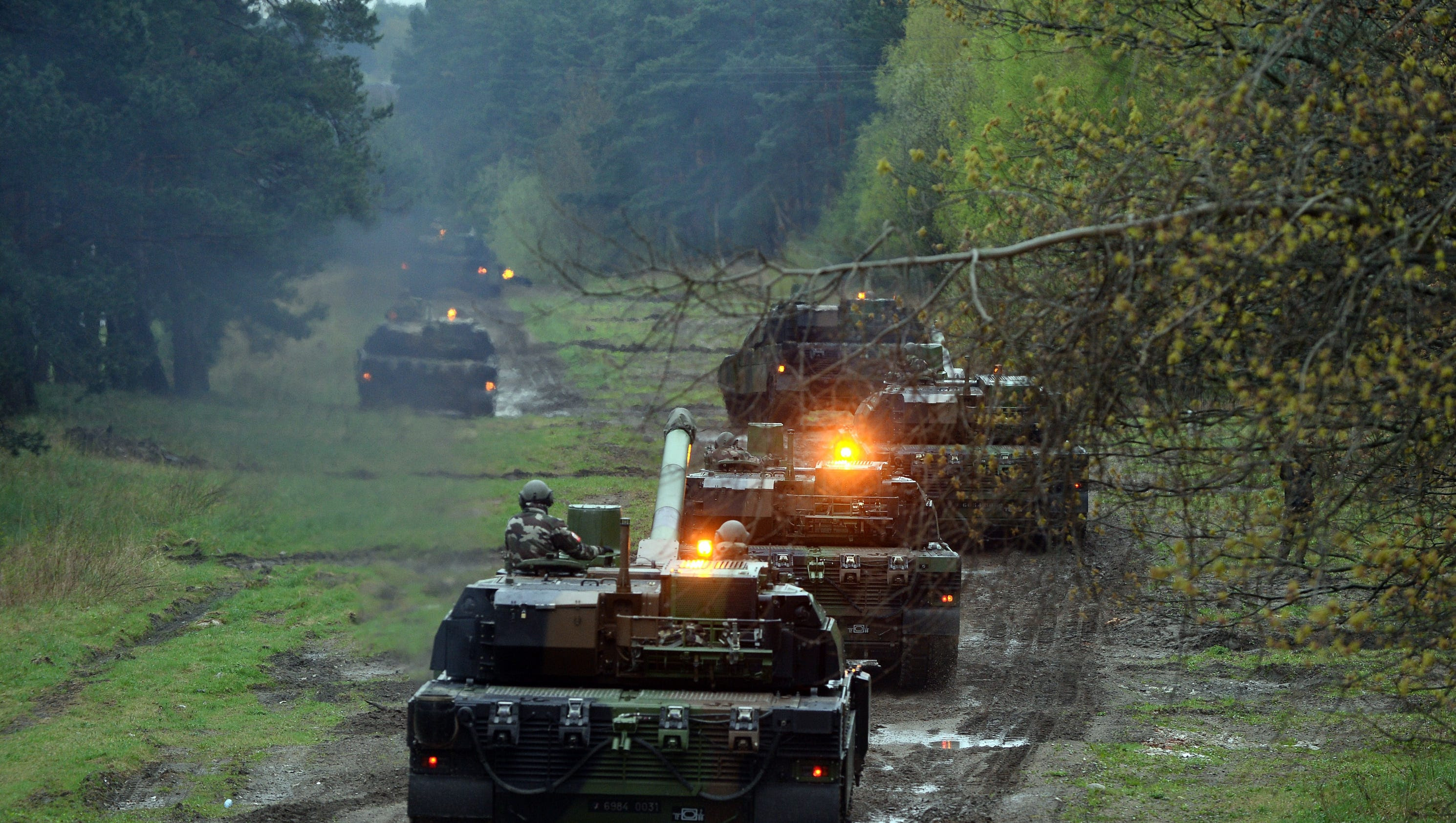 NATO troops on exercises in The baltic states close to Russia's border - and western leaders wonder why the Russians are pissed off? (Image source)
In one of his final acts a Prime Minister, David Cameron has given the go ahead for more British soldiers to be deployed in The Baltic States close to the borders with Russia. The troops who will be working alongside contingents from the USA and other European NATO countries are part of the latest provocation against Russia. The military build up in the Baltic region is ostensibly to counter increasing Russian aggression although as we have reported many times the aggression is coming from NATO and the EU.

Once of the justifications given for this NATO sabre rattling is the annexation by President Putin of Crimea, but that was in response to a CIA engineered coup in Ukraine which replaced a democratically elected government with a US puppet regime. In the wake of this ethnic Russians in Ukraine feared ethnic cleansing by the Ukrain government in Kiev.

Cameron, who was attending a NATO summit in Warsaw, Poland, is expected to make a case against those who doubt London’s commitment’s to the security alliance following the June 23 referendum, when 52 percent of British people voted to leave the EU.

Cameron will tell NATO and allied leaders in the summit that Britain is set to deploy 650 more armed forces in the Baltic States—Lithuania, Latvia and Estonia—as well as Poland, to help thwart “Russian aggression,” British media reported Friday.

The outgoing PM, who announced his resignation after failing to prevent a Brexit vote, will also confirm London’s commitment to spending 2 percent of its national income for military purposes.

Speaking before the summit on Thursday, he said the event would act as “a chance for us to reiterate our strong support for Ukraine and our other Eastern allies to deter Russian aggression.”

UK Defense Minister Michael Fallon confirmed the new deployment on Friday, saying that a battalion of 500 soldiers will be stationed in Estonia while another 150 troops will be sent to Poland.

“[Eastern NATO countries] feel enormous pressure from Russia doing large exercises on the border, flying over their airspace and so on,” he said, adding that NATO needs to stand together in the face of Russian President Vladimir Putin’s efforts to force others treat Russia “as the world power it used to be.”

Ties between the West and Russia have been in tatters since the Crimean Peninsula became part of Russia, having been Ukrainian since the 1950s when Ukrain was part of the Soviet Union. The people of Crimea voted to remain Russian in a referendum in March 2014. NATO and the EU had already angered the Russians by breaking a 1991 treaty by admitting former Soviet States. At the time of the Ukrainian coup, the western alliance and the EU had been working on planse to make Ukraine, Georgia and Armenia members with the stated intent of placing missile defence systems around Russia's borders.

In response to US led military provocation Russia and China have played a more subtle game by working together to undermine the status of the US dollar as global recerve currency.

Since the Crimean kerfuffle NATO has cut ties with Russia and has been increasingly deploying troops and equipment on its eastern flank with Russia. The deployment has drawn anger from Moscow, with Russian President Vladimir Putin vowing a firm response to any threat from NATO.

No to War – No to NATO: Protesters in Warsaw Condemn US / EU Aggression
NATO Baltic Mission 'All About Countering Russian Aggression'
Hacked E mails Prove US, EU and NATO Policy Of Provoking And Escalating Conflict With Russia
Why Do The Western Powers, The United nations And The EU Continue To Tolerate The Terror Sponsor Erdogan And Turkey
One Day Czechs Will 'Wake Up To Find That US Troops Are Here to Stay'
US Missile Shield; Loved Up Obama And Cameron Laugh As Putin Warns Poland, Romania Now In The "Cross Hairs"
Germany Involved in NATO War Games Near Russian Border
After Yugoslavia NATO changed from a mutual defence alliance to an organisation for military aggression.
Free Speech Under Attack Online
Castrating Project Fear: Former-UK Army Chief Shoots Down Claims of Brexit Impact on NATO
Propaganda War: US Officials Working to Keep Russia, Europe at Odds
Ruling Elites In Panic: Trump Presidency Would End Their Global Government Dream
Ignorance Is Strength: European Parliament Ready To clamp Down On Free Speech
Fear and Panic: EU Defence Budgets Boom Amid ‘Russian Threat’ Paranoia
NATO Rhetoric About Russian Threat is 'Absurd'
Is USA preparing for all out war with Russia?
NATO’s humanitarian Convoys Delivering Arms And Ammo To ISIS Halted at Syrian Border
NATO violates treaty to support the Evil Empire
Is USA Preparing For War Against Russia In The Baltic Region?