A Few Random Jottings On Syria, Afghanistan and Flight MH17 While Our Editor Is Away

Our editor is off for a week in luxury resort of Portals Nous in Majorca. We're not saying Ian is stinking rich but the average restaurant dinner for four in Portals Nous will land you with a bill for more than most people's houses are worth. OK, we're exaggerating, but only a little.

As this site is building a good following, here's a a few posts you might like. We will try to put something online every day (except tomorrow me, Phit T Looker and Xavier Connolly are all at the same event all day.

Did The Pentagon know Kunduz air strike target was a hospital?

The Medicins Sans Frontiers Hospital at Kunduz after the US Air Force attack
Some rather disturbing news about the recent US airstrike that destroyed a Medicins Sans Frontiers hospital in Kunduz, Afghanistan. The first lie out of Washington (after the obligatory denial of any involvement) was that the hospital was a cover for a terrorist base, then the narrative changes and the US government said they had been misinformed about the target. Now it emerges that American military intelligence analysts were gathering information on the facility for some time because they believed it was being used by a Pakistani operative to coordinate Taliban activity.

So the U.S. authorities knew they would be bombing a hospital in Afghanistan days before the the operation was launched on Oct. 3. The Associated Press news agency revealed the extent of US government dishonesty on Thursday 15 October.

U.S. fighter jets struck the Afghan hospital, one of many run by Medicins Sans Frontiers (Doctors Without Borders), an international charity group based in Geneva, Switzerland, killing 12 medical staff members and at least 10 patients, three of them children. At least 37 people were injured in the attack, some critically. It is reported that 33 people are still missing following the strike. 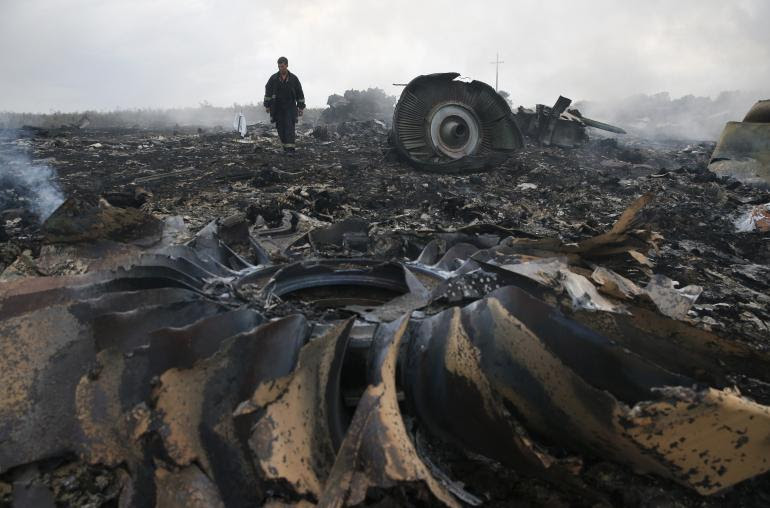 The Dutch Safety Board report on the shooting down of Malasysian Airlines flight MH17 over Ukraine concludes that the aircraft crashed because it was hit by something fired from somewhere by someone. They don't quite phrase it so succinctly of course, but state that an older model Buk missile apparently shot down Malaysia Airline Flight MH17 on July 17, 2014, without identifying who supplied the missile and who fired it. Yet, what is perhaps most striking about the report, in view of President Barack Hussein Obama's claim made before the airliner had hit the ground that he had irrefutable evidence that Russian military personnel, with the full knowledge of The Kremlin, had committed the atrocity is what is not there. There is nothing at all from the alleged U.S. intelligence data on the tragedy.

The absence of evidence from U.S. spy satellites and other military and civilian sources that Secretary of State John Kerry insisted just three days after the shoot-down could pinpoint from where and by whom the missile was fired. Such information would naturally be important in determining responsibility.

On July 20, 2014, Kerry stated on NBC’s “Meet the Press” that “we picked up the imagery of this launch. We know the trajectory. We know where it came from. We know the timing. And it was exactly at the time that this aircraft disappeared from the radar.”

But no such U.S. government information is mentioned in the 279-page Dutch report, which focused on the failure to close off the eastern Ukrainian war zone to commercial flights and the cause of the crash rather than who fired what at MH-17. A whistleblower within the U.S. intelligence system leaked earlier this year that CIA analysts had met with Dutch investigators to describe what the classified U.S. evidence showed but apparently with the caveat that it must remain secret. No doubt it would 'threaten national security' to reveal this evidence. Perhaps that threat was the likely exposure of criminality in the regime the US engineered coup in Ukraine put into power.

In October 2014, Der Spiegel reported that German intelligence, the BND, concluded that the Russian government was not the source of the missile battery – that it had been captured from a Ukrainian military base – but the BND blamed the ethnic Russian rebels for firing it. However, a European source said that the BND’s analysis was not as conclusive as Der Spiegel had suggested.

The official report, released Tuesday 13 October, did not clarify conflicting accounts but did agree with an analysis by the Russian manufacturer of the Buk anti-aircraft missile systems that the shrapnel and pieces of the missile recovered from the MH-17 crash site came from the 9M38 series, representing an older, now discontinued Buk version.

After what ISIS did to Aleppo it's hard to see how Russian and Iranian forces can make it worse ...

Earlier this week, we noted that Iran had reportedly sent “thousands” of troops to Syria in preparation for an offensive aimed at retaking the city of Aleppo.

With a population of more than 2 million, Aleppo was Syria’s largest city prior to the war and it’s now run by a hodgepodge of rebels and militants including al-Qaeda, the Free Syrian Army, and ISIS.

The battle is also notable for the scale of Iran’s involvement. Between Hezbollah and Iranian forces, the battle for Aleppo is shaping up to be the largest ground operation orchestrated by Tehran to date.