As the nations of the world look on, gobsmacked, the US election process sinks further and further into chaos. Who is writing the script for Hillary Clinton, FBI Director James Comey and US Attorney General Loretta Lynch, have they exhumed and reanimated The Three Stooges? The utter political chaos brought about by Comey’s latest bombshell, the reopening of the FBI investigation into Hillary Clinton's use of a private email server during her time as Secretary Of State for the Obama Administration has cost the USA what little credibility it had left in global politics. The scandal has moved on and while Hillary Clinton is still in the frame, the investigation now centres on her close associates Anthony Weiner amd Huma Abedin. 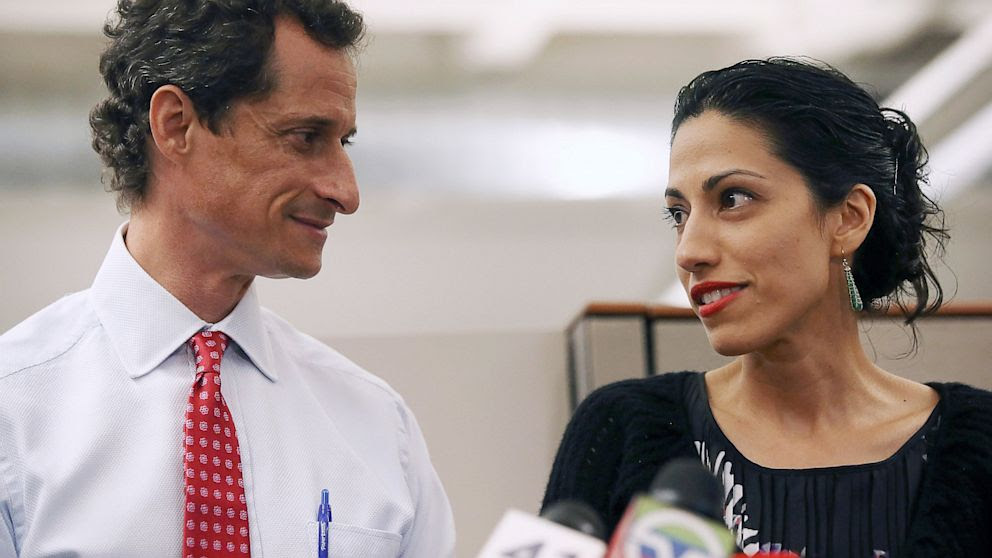 Anthony Weiner and Huma Abedin - we would not usually expect people who look like that to be deeply involved in sex scandals (Image source abc news )
It now seems certain that Attorney General Lynch told Comey not to release his letter advising both houses of the US Congress the investigation of possible offences relating to national security relating to Clinton's private server was being reopened. But Comey did it anyway, had he not the scandal would have re-erupted after the election, Lynch would be perfectly positioned to deny she knew anything, Comey's arse would have been on the line would and the USA would have likely faced the embarrassment of having its president elect arrested for treason.

Lynch has been on the Clinton bus for a long time. In 1999 then-President Bill Clinton gave her a first official appointment, running the Brooklyn US Attorney’s office. She left in 2002 Bush put his own people in place, to take a job in private practice. She was back to the Brooklyn office in 2010, when Obama, urged on by the Clintons put her carer in public service back on track. Five years later she became the 83rd US Attorney General, replacing the partisan and unjust Eric Holder, who had successfully politicised the legal system.

Another batch of credible rumours suggest Comey hand was forced by a serious internal revolt at the FBI, led by very senior oficers. FBI staff were disgusted at they way Clinton was let off with a warning after it had been acknowledged that crimes had been committed worse than those civil servants and army officers were doing jail time for.

But why did the FBI waited until 11 days before the US presidential election to supposedly "find" an email trove on certified sexting pervert Anthony Weiner’s laptop?

One possible answer is that Comey, having been advised of a cache of State Department emails relating to Clinton's time in charge was being blocked from investigating by Lynch and the Department Of Justice. The newly discovered mails had been found by New York police officers investigating the alleged paedophile activity of Anthony Weiner, a Clinton associate and husband of Huma Abedin, Hillary's closest aide. The story goes that Comey had been told by the sex crime investigators the stuff on a laptop shared by Weiner and Abedin related to the Clinton case and at they very least was proof of perjury, both women having sworn under oath that ALL the material relevant to the earlier investigation had been handed over.

A Washington source, known to be unsympathetic to the Clinton machine especially in foreign policy, but a pragmatist, is adamant that, “the FBI reversal could not have happened without orders above the President. If the Masters Of The Universe (Shadow Government, New World Order, Illuminati, george Orwell's Big Brother regime, whatever) have decided Clinton, their anionted one to succeed the rent boy president, Obama then they will destroy Hillary Clinton and all associated with her.

What happens then? They could make a deal with Donald Trump of course, some people have said The Controllers fear him because they do not own him. They did not own Bernie Sanders, yet having vowed to fight Crooked Hillary to the end Sanders apparently folded at the Democratic Party convention, telling his supporters to get behind Clinton. We now know from the leaked Podesta emails that threats were made against Bernie Sanders wife. That is how dirty Democratic Party politics is, even the Mafia are honourable enough to leave wives and children out of 'business matters'. Donald Trump is human, he has a wife, he has children, grandchildren maybe. Just like anyone else he can be got at. So with thugs working for The Controllers (h/t Aldous Huxleys Brave New World,) Donald becomes president; The Controllers tighten their grip on power; the people think that their voice has been heard. There will be some sort of cosmetic changes then business as usual.

Sources close to the FBI investigation into Democratic Party presidential candidate Hillary Clinton's offences relating to national security when she was Secretary of State say the Feds are ready to indict the frontrunner in the nomination process on charges relating to classified information.Yes, the Panama Papers Could Really End Hillary Clinton’s Campaign
We've been chronicling the downfall of Hillary Clinton, from her seemingly unassailable position as the anointed successor to Barack Obama, whose path to first the Democratic Party nomination and then the Presidency itself had been carefully planned and all obstacles removed. The fixers and deal makers had reckoned without two factors however, Bernie Sanders and Mrs. Clinton's poor image with voters, a result of her spoiled little rich girl arrogance and the incompetence she showed in office as Secretary of State.
Obama's price for saving Daves seat on the EU Gravy train
America being destroyed by neo - liberalism

While the progessive left's hate brigade continues to scream and shout that Donald Trump is unfit to be president because he sometimes uses coarse language that upsets the Special Snowflakes, every passing day as the USA inches towards its presidential election, it seems a new scandal emerges about the corruption and criminality that has for decades been the hallmark of Democratic Party candidate Hillary Clinton, her immediate family and her associates.

With yesterday's news dominated by the decision announced by FBI director James Comey to reopen the investigation into the case of Mrs. Clinton's criminally negligent handling of state secrets while she was serving as Secretary of State, agent investigationg an apparently unrelated sex crime allegation against a Clinton associate having found a cache of emails relevant to the investigation but previously undisclosed, on the man's laptop, and rumours rife on the net that the suspect was part of a paedophile ring that the candidate's husband, serial sex abuser Bill Clinton has been linked with, Donald Trump's coarse language seems hardly significant.

Another as yet unconfirmed, but highly plausible rumour about the reopening of the investigation, a highly unusual step so close to an election, is that Director Comey's hand was forced by FBI agents disgusted that Clinton was let off with a caution at the end of the previous stage in this investigation even though there was clear evidence she had knowingly been involved in illegal activity. FBI staff have no reason to love Mrs Clinton, several agents assigned to her personal security detail have testified (and been backed up by media people) that she treated highly trained agents who job entailed being prepared to take a bullet for her if necessary, as her personal gofors and regularly harangued they with foul mouthed outbursts when told she could not have what she wanted. Such arrogance and crass manners do not win many admirers.

But that was yesterday, today it gets even better:

The decent core of FBI agents who forced director James Comey's hand last Friday isn't finished with the Clintons yet:


The FBI unexpectedly released 129 pages of documents related to an investigation closed without charges in 2005 into President Bill Clinton’s pardon of Marc Rich, who had been married to a wealthy Democratic donor.The file was posted online Monday but received little attention until the FBI noted it in a tweet on Tuesday afternoon. It comes as Director James Comey faces fire from Democrats and even some Republicans for releasing information about his renewed investigation into Hillary Clinton’s use of e-mail.
The unusual timing of the release was the result of a Freedom of Information Act request that had been completed and was posted under standard FBI practice, according to a law enforcement official who asked not to be identified discussing internal matters. But the Clinton campaign immediately questioned the timing of the release.
“Absent a FOIA litigation deadline, this is odd,” Clinton campaign spokesman Brian Fallon said on Twitter.

Boo hoo! The Marc Rich pardon -- which Eric Holder facilitated -- always stank to high heaven: a flat-out bribe to Bill Clinton, to present the most charitable interpretation. But then, the Clintons are never ones to look away from large sums of money, even when the national security of the United States has been compromised, as it was in Rich's case.

It seems that neither ?Hillary nor her sex pest husband, both proclaimed as hot shot lawyers, have much understanding of the law. Either that or they believe the law does not apply to the elites.

A Donald Trump presidency may not appeal to many US voters, but at least he understands that the law must apply to everybody. Hillary Clinton is a tyrant in waiting. The African American President Barack Hussein Obama has turned the USA into an African style chaotic failed state, Hillary Clinton shows sje would government in the manner of the worst African dictators, establishing a crony caste and with them plundering the assets of the nation and irs citizens.

Clinton Kill List To Determine Who Will Be US 2020 Presidential Candidate?
And then, in accordance with Murphy’s law, which states just when you think things can’t get any worse, they do, Hillary Clinton has emerged, having found what she obviously thinks is a sure – fire route to the presidency, to offer her services as vice presidential candidate to whoever wins the nomination. And just to show how far The Democrats are removed from reality, many leading figures in the party and the left leaning media think it’s a good idea.