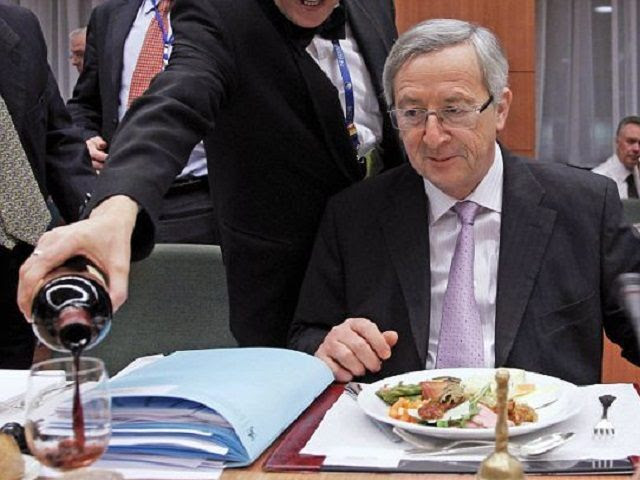 Jean Claude Juncker (seated) tells waiter, "Fuck the stuff on the plate, just fill my glass to the brim and leave the bottle)
E U Commission President Jean Claude Juncker, a man reputed to have brandy for breakfast, (paid for by us European taxpayers of course,) has praised Hausfrau - Volksfuhrer Merkel for IGNORING public opinion on the crisis in German cities and towns caused by uncontrolled mass migration of illiterate third world peasants.

European leaders threw threats and warnings at each other at a meeting held on Saturday (24 October) as thousands of undocumented travellers (a few refugees, mostly economic migrants) continued to stream across poorly secured borders into the Balkans. Saturday's meeting was in preparation for European Union talks aimed at deciding on a course of action to tackle the crisis (Source: Reuters).

Concerns are growing about the hundreds of thousands of undocumented travellers arriving on European shores and camping in western Balkan countries as winter closes in and conditions become colder and more difficult. Over 700,000 migrants and refugees are estimated to have made their way to Europe by sea some crossing the Mediterranean from north Africa, others making a short crossing from Turkey to Greece and the Balkans having travelled across Turkey by land. According to mainstream media they are fleeing war and poverty in the Middle East, Africa and Asia, but independent surveys have found most are not from nations affected by war at all.

Bulgaria, Serbia and Romania have all stated they would close their borders if Germany or other countries shut the door on refugees, warning they would not let the Balkan region become a “buffer zone” for stranded migrants.

"The three countries, we are standing ready, if Germany and Austria close their borders, not to allow our countries to become buffer zones. We will be ready to close borders," Bulgarian Prime Minister Boiko Borisov told media representatives.

Until recently Hausfrau - Volksfuhrer Merkel was saying all refugees were welcome in Germany, but that triggered such a massive surge in numbers and had such a dramatic adverse effect on German national infrastructure, political partners in Germany's ruling coalition have forced her to back off from that position risk the collapse of her government.

Before the meeting Juncker praised Merkel for ignoring German public opinion in her efforts to flood her nation with Muslim migrants and make GFermans a ethnic minority in Germany. An avid integrationist, the alcoholic EU President sees the 'refugee' crisis as a way to dilute opposition to political integration of the EUs 28 member states into a single federal superstate. Merkel has described the absorption of millions of Islamic fundamentalist refugees into secular Europe as a bigger challenge for Europe than Greece’s debt woes.

"This isn’t about short-term popularity but about substance," he told German media group Funke.

The Eurocrats are finally telling the truth, they are fascists; the elite rule, the populace are irrelevant. According to Juncker's comments reported above, if the public has an opinion, it isn't "substance" and that opinion is to be ignored. Bureaucratic Dictatorship by unelected officials is finally admitted.

Germany is now close to gaining the domination of the continent Hitler and Kaiser Bill sought, with the support of the quisling leaders in France, Spain, Sweden, Austria, Netherlands, Belgium, Italy, Poland and other EU members. The non-quislings will be stripped of power, as happened in Portugal last week when an anti - EU coalition won a general election only for the President (usually a ceremonial office only) and law courts to announce they would not allow a government opposed to EU integration to take office.

Is Juncker correct, it is about substance? Or is it about whether Europe will survive in domestic peace and as part of the Judeo-Christian West. In short, unless we kick out the fascists from Brussels, no, it wwill not.

The majoroty of Europe's migrants follow a religion / ideology that calls upon them to conquer and / or kill you (read the Koran if you do not believe me). That means some will be terrorists and the rest will breed prolifically enough that at some point they will be the demographic majority and ethnic, Secular or Christian Europeans will be oppressed and persecuted minorities as our African, Asian and Arab conquerors turn once great nations into barbaric third world shit holes, imposing sharia law and Islamic culture (if that isn't an oxymoron?).

The idiocy of the political left who are eager for this to happen is that after spending fifty years screeching about women's equality and human rights are quite happy for human rights law and womens' place in society to be dictated by Sharia which identifies the role of women as their husband's or father's chattel.

On the way there we will face Syria - like civil wars. If there is one thing your average Islamic fundamentalist nutter l;ikes better than killing Infidels of any flavour it is killing Muslims of the wrong flavour.

European Authories already know many of the migrants are violen terrorists, but continue processing them rather than expelling them. It's as if European Union authorities and national leaders want war in Europe, followed by demographic and political take over and colonization. Is that the "substance" Juncker had in mind? Or was he babbling nonsense because as usual he was totally rat - arsed?

Although it seems Sidi Barack Hussein Obama, the wannabe God - Emperor of the world and President Of The Entire Universe and everything Else Besides is still planning to visit Britain in late April to tell us all of HIS vision for Britain's future as a province of the US State of Greater Germany with Europe, British voters are distincylt undwerwhelmed by the prospect
Cameron's EU Deal As Worthless As Neville Chamberlain's 'Peace In Our Time.'?
Opinion polls show Britain is evenly divided on the question of whether to leave or remain in the EU, though it has been suggested up to 10 million other voters, many of them women, have yet to make a decision. How they cast their vote will shape the future of the world’s fifth largest economy and the EU itself.