Massive protests erupted around the world on Saturday as the backlash against vaccine passports, continuing lockdowns and mandatory vaccination gathered momentum.

Tens of thousands of people are mobilizing in demonstrations in England, France, Italy, Australia, and even Finland in retaliation of their government’s announcing draconian “health passes” to determine the vaccination status of citizens.

Huge protests are being documented in Sydney, Melbourne, and Brisbane after government’s announced more nationwide lockdowns following the country’s third COVID death in 2021.

Thousands of people have joined anti-vaccination protests across Australia, ahead of the country rolling out its coronavirus inoculation program next week.

The protests, organised by Australian vs The Agenda, were largely peaceful but police made several arrests in Melbourne.

The coordinated rallies were held only two days out from Australia beginning its COVID-19 vaccination program.

The Pfizer vaccine has arrived in the country and the Therapeutic Goods Administration (TGA) has recently given the Oxford University-AstraZeneca jab the tick of approval.

The group claims to represent "everyday Aussies who have been oppressed, arrested and charged by a tyrannical Australian Government". After a spontaneous protest on July 19 (Freedom Day) brought parts of London to a standstill and resulted in arrests and several police officers being injured as the cops resorted to their favourite heavy handed tactics to disperse peaceful protestors (in contrast to the way the cowardly, cocksucking cops 2took the knee" in front of the violent thugs involved in Black Lives Matter protests). On the day where all COVID-19 restrictions across England have ended, despite the rising number of new coronavirus cases. Footage shared on social media this afternoon showed hundreds of people on the streets of the capital protesting on Freedom Day. Large groups of unmasked people were pictured outside Westminster, with many holding banners reading: "Liberty!" Traffic was also brought to a standstill outside the Houses of Parliament as protestors spilled out onto the roads. Some demonstrators also clashed with police officers near Parliament Square and towards Westminster Underground station. Sunday's protest, the latest in a series of huge gatherings in London to protest the fascist measures inposed by Boris Johnson's globalist government is expected to be the biggest yet and will bring the capital to a standstill. BoJo The Clown must be made to understand there is a price to be paid for the harm and misery he has caused because he ignored the common sense of the people and only listened to incompetent, lying, self serving scientists. TRhere is more science in the steam of a mouse's piss than has been seen in the whole of the government's insane pandemic response. 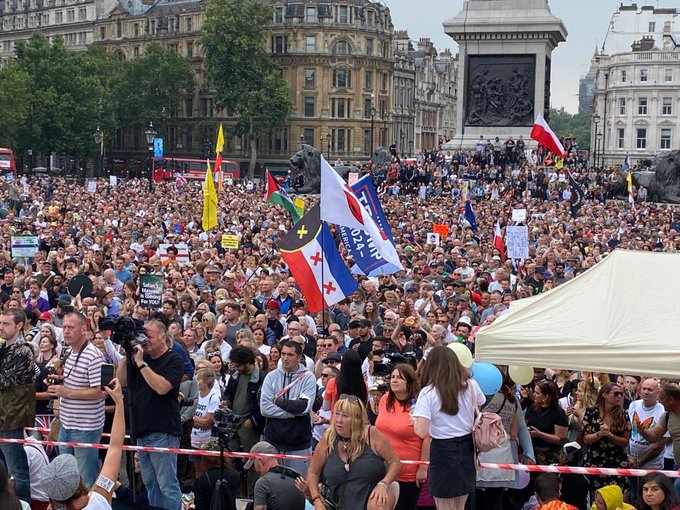 Over 100,000 people protested across France on Saturday against the government’s latest measures to push people to get vaccinated and curb rising infections by the delta variant of the coronavirus. In Paris, separate protest marches by the far-right and the far-left wound through different parts of the city. Demonstrations were also held in Strasbourg in the east, Lille in the north, Montpellier in the south and elsewhere. Thousands of people answered calls to take to the streets by Florian Philippot, a fringe far-right politician and former right hand of Marine Le Pen who announced earlier this month that he would run in the 2022 presidential election. Gathered a stone’s throw away from the Louvre Museum, protesters chanted “Macron, clear off!”, “Freedom,” and banged metal spoons on saucepans. While Philippot has organized small but regular protests against the government’s handling of the coronavirus crisis, Saturday’s demonstration drew a larger and more diverse crowd of people broadly disaffected with politics: yellow vest activists angry over perceived economic injustice, far-right supporters, medical staff and royalists. French President Emmanuel Macron is under mounting pressure amid an outburst of anger against his policies erupting on the streets of France. Tens of thousands of people demonstrated across the country this afternoon against Mr Macron's anti-Covid policies. Protesters clashed with police officers as violent scenes flared up in the capital city of Paris.

Turin's Piazza Castello was packed with critics of the move on what was dubbed "No Fear Day", where organisers urged protesters to "show everyone what free men stand for". Yesterday saw Italy follow in the footsteps of France by announcing that proof of vaccination or immunity would shortly be required for an array of activities. Italians reacted angrily to the warning that they soon would not be allowed to dine indoors at restaurants, work out at the gym or visit a swimming pool, cinema or museum without a "Green Pass". Addressing the crowds gathered in Turin last night, a speaker said: "Officially we are 2,000 people, so we must be at least twice that number. "Let's show everyone what free men stand for." People responded to his call enthusiastically by chanting "freedom". Ugo Mattei, a law professor and candidate for mayor in the Piedmontese capital, was among those who addressed demonstrators. The event was organised by Marco Liccione, 31, who has organised other events against the government's restrictions. Youngsters who attended the rally said they are not against vaccines, but do not want to see jabs made mandatory. 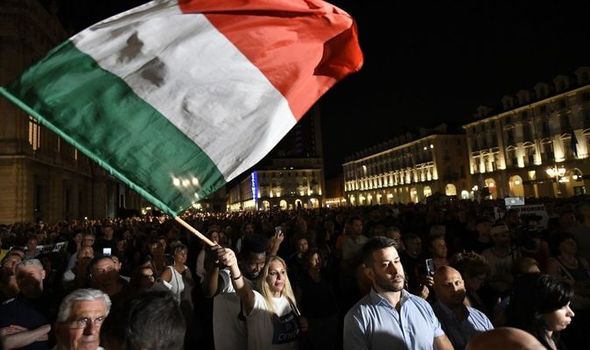 These are just a small sample of the protests around the world as public anger about this man made pandemic, the lies of the medical science community, the eagerness of politicians to use scaremongering propaganda to justify stripping citizens of their rights and liberties and against the money gribbing corporate pirates that make and sell vaccine. There is a completer loss of trust in governments, the police, media, academic communities and religious leaders. In the chaos that is bound to follow one can only hope it is the enginerrs of the pandemic and the globalist power grab and not the leaders of the resistance whose heads end up on spikes around the city walls.
Posted by Boggart Blogger at 3:34 PM No comments: