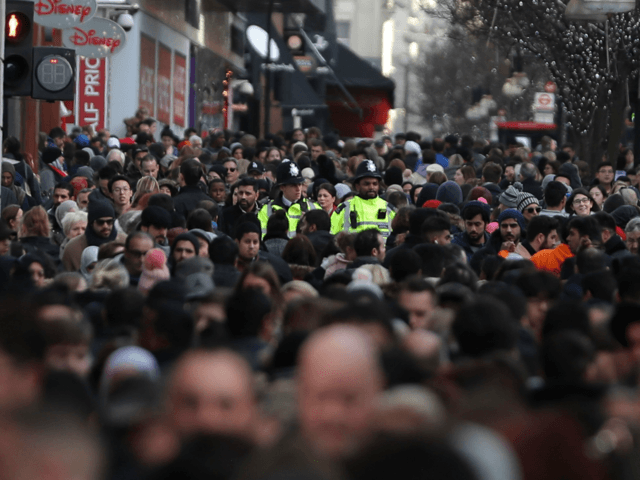 One of the UK’s highest ranking police officers has attacked the government's policy of prioritising “hate crimes,” over serious crimes such as theft, vandalism, violence and fraud, calling for officers to be reassigned to investigate more burglaries and violent attacks by focusing on “core policing.”

National Police Chiefs’ Council (NPCC) Chair Sara Thornton CBE also said she did not want to see “misogyny” and offensive comments about women specified in law as hate crimes. One can only hope she feels the same about truthful criticisms of Islam, which glorifies misogyny, violence and rape.

Thornton suggested political pressure is being put on police to record “hate incidents” that do not qualify as crimes when resources are stretched, many traditional crimes against people or property are not being investigated and violent crimes has risen to record levels.

She said “investigating gender-based hate crime… cannot be a priority for a service that is overstretched” and that “core policing” has not “received enough attention in recent years.”

The outburst was on the same day as the government revealed plans to encourage reporting of even more trivial incidents as hate crime by launching a “new nationwide hate crime campaign aimed at increasing awareness and understanding of what constitutes a hate crime.”

However, beating someone up should not be put on a par with saying homosexuals should be pushed back in the closet because they are perverts. That is mildly offensive but can only hurt someone's feelings. And in the great scheme of things, an individual's feelings are no more significant than a gnat's fart in a hurricane.

Speaking at the NPCC nation annual conference, Ms Thornton said: “We do really need to refocus on core policing. The public expects an effective response to organised crime, to terrorism, to the focus on the vunerable.

“But, they also expect the basics: responding to emergencies, investigating and solving crimes, and neighbourhood policing. It is this core policing that is seriously stretched – This is surely part of the police covenant with the public. We are, however, asked to provide more and more bespoke services that are all desirable. But the simple fact is, there are too many desirable and deserving issues.

“For example, treating misogyny as a ‘hate crime’ is a concern for some well-organised campaigning organisations."

Some police forces already began treating “misogyny” and making offensive comments to women as hate incidents back in 2016 and London’s Metropolitan force revealed last year they are considering following suit. In violation of every long establishedd principle of British justice, “no evidence” is needed to report a hate incident. An accusation by a member of one of the anointed minorities is sufficient to establish guilt.

It has frequently been reported that some UK police forces are urging people to report “non-crime hate incidents” and “offensive” online comments to “re-emphasises the need” for officers to “tackle hate.” And they thick plods wonder why they have lost the trust of the public. Still that's what happens when you make a vocation into a degree entry profession - you end up only being able to recruit university brainwashed idiots.


The pushback against politically correct thinking, identity politcs and the hatred from feminists for all things male is probably overdue but it is coming. After the #MeToo campaign tried to return our view of justice to the equivalent of a medieval witch hunt by making accusation of a man by a woman sufficient evidence on which to convict, while the racists of black Lives Matter tried to bully lawmakers into accepting that requiring black and brown people to obey the law is racist, the populist movements in the USA and Europe. which have put Trump in The White House, taken Britain out of the EU and put anti -establishment governments in power in Poland and Italy continue to gain strength.

Since Donald Trump, frontrunner in the race to be nominated Rebpublican candidate in the 2016 US Presidental election made some unpolitically-correct comments about stropping followers of Islam entering the USA until a way can be found of identifying the ones who have been radicalised and trained to perpetrate acts of terrorism in the USA, they media have been getting their knickers in a right old twist.

The story of the militant femists munter who ran a marathon on the first day of her 'monthlies' without using a tampon or sanitary towel (they're a sexist symbol or the oppressive patriarchy donchakow) is not new. The London Marathon was run back in April and the story of Kiran Gandhi's brave stance against male oppression (along with pitures of the dark stain speading across the croth of her leggings) was ignored by mainsteam and alternative media alike.

We've had junk science on climate change, genetically modified seeds, many types of medicines and social engineering. The junkiest of junk science however is always commissioned by public service organisations and is aimed at convincing the public that our public servants are doing a good job. Fortunately the public are not as gullible as our leaders suppose.

A trial jury atThe Old Bailey, London, heard yesterday the harrowing ddetails of how two schoolgirls were groomed and raped by an paedophile gang based in Aylesbury, Bucks, while aged just 12 and 13. Eleven gang members, accused of carrying out the crimes between 2006 and 2012 face 49 criminal charges between them including statutory rape, child prostitution and creating child pornography, The Daily Mirror reports.

The latest outburst has come in response to a few tabloid stories of actor Aidan Turner's 'topless' appearances in the BBC television series Poldark. The screeching sisters can't really complain about male chauvinism as it is women who are lusting for Ross Poldark. So the ladies (?) are upset because they can't go topless too.

Crazy California has for many years held the title of global capital of politically correct isanity, but recently Sweden, always a contender, has shown signs of taking the title. The latest example of PC fuckwittery from Sweden's politically correct in their efforts to sacrifice western civilisation to feminist self righteousness and Muslim extremism left suggests they might be ready to assume the title, craziest place on earth.


Multi-Cultural England: Are You Feeling The Progressive Diversity.

As racial and sectarian tension increase on the streets of britain while politicians gear up for the election campaign, we take a look at the state of Britain today, Imigrant child abuse gangs, Clerics of alient faiths dictating moral strictures, and everywhere we look, foreigners being given provieged status. Is it any wonder the voters are angry?

‘Mothers invited to a Scottish Government-backed breastfeeding conference were left angry and bemused after being told that they would not be allowed to breastfeed their babies.

All three main parties in the UK General Election are campaigning from a Politically Correct Consensus (i.e. Control Freak) platform. But whenm it comes to politically correct control freakery, Labour will always outdo the others. The main early thut of their campaign is a promise to criminalise sugary snacks and breakfast cereals, fatty foods and some fizzy drinks. And they're serious, they have handed the job of selling this idiocy to The Cockfish of British politics.

When does being reasonable and open minded become cowardice? When academics who pride themselves on intellectual detachment cave in to threats from extremists and try to pass off their pitiful weakness by pretending they are showing sensitivity to the feelings of minorities. Don't send you little geniuses to Oxfor, they may and up with a PhD in spinlessness.

Liberal Says We Shouldn’t Prosecute Sexual Predators… if They are Black.

There are plenty of examples of the depths of stupidity to which 'liberals' or supporters of 'the progressive left' will stooop in order to curry favout from members of the darker skinned races, but few are as staggeringly idiot as this one.

The Feminist Witch Hunt That aims To Destroy Ched Evans

When did democracy go out of fashion. I don't remember voting on whether we wanted to give up our civil liberties or be ruled by a dictatorship of unelected bureaucrats from Brussels, but that is where we are heading, along with the other free nations of Europe. And the USA, so-called land of the free is further along the road to fascism than Europe.


South Yorkshire Police Commissioner Shaun Wright Finally Resigns Over Rotherham Child Abuse Scandal
The man who bears most responsibility for failure to investigate the Rotherham child abuse scandal has finally resigned after three weeks of excuses and evasions. Police Commissioner Wright has been under pressure ever since a report by Prof Alexis Jay (see below) revealed a huge level of child abuse in the South Yourkshire town of Rotherham. The organised sex crime rings had been operating for ...

What immigration has been to the Conservative so the Child Sex Cover Up scandal is proving to be for Labour as the party gets set to tear itself apart. With similar scandals due to be exposed in Rochdale, Bradfor, Oxford and other big towns, the Rotherham case is gathering momentum. So indirectly it looks as if immigration and fear of being called racist will be the downfall of both major parties.

All week I have been seeing blogs and comments written by lefties proclaiming idiotically that Douglas Carswell's defection to UKIP was the beginning of the end, that the UKIP bubble had burst and so on. Pretty much what they were saying in the days after UKIP had trounced the mainstream parties in the European Parliament elections.

In a move that puts them among the contenders for lying, self serving shits of the decade, but still in a league of their own un terms of complete and utter shittiness, it has emerged that the scum sucking scab lice of Rotherham Council's controlling Labour group and the public servants they employed had deleted files in order to cover up their complicity in the blatant and systematic child abuse perpetrated under the noses of council officials.

Kick Political Correctness Out Of Football

The Hate And Prejudice The Bourgeois Left Find Acceptable

The neo - fascist left are quick to jump on any of the forbidden pejudices, racism, sexism, homophobia, islamophobia and so on. But as we have seen, they find pejudice and hated againt Christians and white Europeans quite acceptable. The bourgeois metropitan set might think that is acceptable but where I come from it's called hypocrisy.

The Scottish Independence debate has failed so far to fire passions north of the border. Most Scots seem to be seeking evidence that Scotland will be no worse off as an independent nation, or is and will continue to be better off as part of the UK. Nobody in either London or Edinburgh is able to give a straight answer however. Her's our contribution ...

Pandemonium: UKIP Taken Over By Fiends From Hell?

UKIP are at risk of being engulfed in another "ism" scandal as Jake Baynes, prospective parliamentary candidate for Wells has resigned his candiacy and party offices, claiming the constituency party has been taken over by "Occultists"