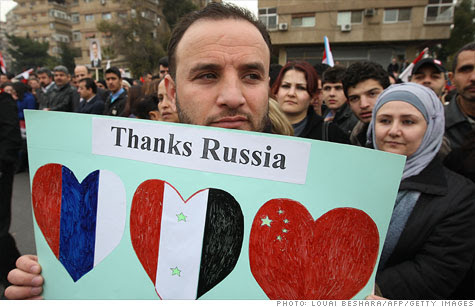 In spite of Obama's lies, the majority of Syrians have remained loyal to Assad, simply because he kep the extremists under control.

In was always going to happen once the Russian air force had softened up ISIS and Al Qaeda positions in Syria. With the opposition on the run (and unconfirmable reports suggesting thousands of ISIS irregulars are desterting) thanks to five days of air bombardment from some of the most advanced strike aircraft in the world, we predicted Iran would send in the Hezbollah/Shiite militia/Quds clean up crew, who will take great plesasure in ensuring whoever is left in the wake of the Su-34 strikes is swiftly eliminated at close range. If there is one thing your average Muslim fantatic enjoys more than killing infidels its killing other Muslims for being the wrong flavour of Muslim.

The Russian rout of ISIS is a text book example of how to conduct a real war. No need for Wst Point graduates, Harvard guys with PhDs in political science or McKinsey management consultants chanting, "If it can be measuresd it can be managed", you don't need a university education to understand it, in fact a university education is probably a disadvantage (as it is in most things.) Russia has essentially debilitated Assad’s opposition from the air and now, Iran will stroll in (metaphorically and literally) mop up any pockets of resistance. Of course Damascus will get to claim that the SAA emerged victorious with the help of Russian air support, but in reality, there is no SAA, the ground campaign was being orchestrated from Damascus by Quds commander Qasem Soleimani. Reuters reports:

The Russian government says its Syria deployment came as the result of a formal request from Assad, who himself laid out the problems facing the Syrian military in stark terms in July, saying it faced a manpower problem.

"Soleimani is almost resident in Damascus, or let's say he goes there a lot and you can find him between meetings with President Assad and visits to the theater of operations like any other soldier," said one of the senior regional officials.

What’s going on here really couldn’t be much clearer. Iran is simply taking over Syria with the help of the Russian air power. Russia gets to show of its SU 34s which should end any ideas in The Pentagon about US air supremacy. Putin gets to spin his Mid-East humiliation of the USA as a "war on terror." Associated Press (reporting from Beirut by the way, so just Google “Hezbollah, Iran, Lebanon,” and draw your own conclusions about who’s feeding them these headlines) said:

What is left of the Syrian army is otherwise engaged of course, but there are dozens of fierce Shiite militias from Syria and Iraq as well as the Kurdish PKK and there’s always Hezbollah, and supported by Russian air power, these make a formidable military force. Now Moscow is also firing on anti-regime targets from the sea. Russsia Today says:

Four Russian Navy warships have fired a total of 26 missiles at the position of the terrorist group Islamic State in Syria, Russia’s Defense Minister Sergey Shoigu announced. The missiles were fired from the Caspian Sea.

The missiles flew some 1,500 km before reaching their targets, probing their efficiency.

The missile attacks came from Russia’s fleet in the Caspian Sea, which borders Russia, Iran and three other littoral countries. The precision weapons hit all intended targets.

The attacks apparently required cooperation from Iran and Iraq, as the missiles had to travel through their airspace to reach Syria.

Yes, “the attacks apparently required cooperation from Iran and Iraq” which we certainly imagine wasn’t too difficult for Moscow to obtain, because as we outlined in "Russia's action against ISIS in Syria outwits Obama Again", this was the plan all along.

Still sceptical? Just consider the following out today from The Wall Street Journal:

Iraqi Shiite lawmakers and militia leaders are urging Russia to launch airstrikes on Islamic State militants in their country, an escalation that would heighten tensions with Washington and increase risks of a clash between the two powers.

Since Moscow began bombing opponents of the regime in Syria last week, Iraq’s Shiite politicians, who dominate government, have been largely united in their praise of Moscow’s intervention and in calls for Prime Minister Haider al-Abadi to invite Russia to join the battle. Mr. Abadi said he would welcome Russian strikes as long as they were coordinated with the U.S.-led coalition’s air campaign against Islamic State in Iraq.

“We welcome Russian airstrikes in Iraq to help hit Islamic State headquarters, target Islamic State supply lines from Syria and target the oil smuggling lines,” said Moeen al-Kadhimi, a spokesman for the Badr Corps, an Iranian-backed militia and political party that plays a front-line role in fighting Islamic State. “We welcome Russia as they have advanced military technology and can help with intelligence.”

For Moscow, any involvement in Iraq would be even more complicated than its current Syria gambit. A Kremlin play in Iraq is likely to spotlight weaknesses of U.S. policy there, while exposing the contradictions in the Iraqi government’s dueling alliances, said Anthony Cordesman, a longtime Iraq analyst at the Center for Strategic and International Studies.

“It would be difficult to sustain congressional support for an Iraq playing off Iran and Russia against the U.S.,” he said. “The administration would have very tough calls to make.”

Options would include leaving Iraq or finding a way to operate in parallel with Russia and Iran, raising questions about broader U.S. goals in Iraq.

“We don’t really have a strategy, just a set of short-term engagements,” he said.

No, Washington doesn't "really have a strategy" in Iraq because they had no intention of defeating ISIS, a terrorist fightinf forced set up by the CIA with the intention of turning Syeia and Iraq into failed states like Libya and destabilizing Iran, but guess who does? Tehran. And the very same General who is running the Syrian gound war from Damascus and who Putin sent for directly to organize the entire campaign is known to control the Iraqi Shiite millitia leaders. Now, Russia - which regards Iran as a good and strategically significant ally in the middle east is apparently set to kick the USA out of Iraq (and probably Afghanistan too) altogether.

And while Russia literally takes over the Mid-East, the West is busy trying to find ways to claim that Moscow is in violation of NATO members' sovereignty.

In depth look at the biggest USA foregn policy screw up since Vietnam. The God King Obama is exposed as a war monger and neo - Con puppet, the USA is now know as the terrorist state and the positions of Russia and China in the global power stakes. And Assad is still in power in Syria ...

After an amazing outburst from the delusional Brack Obama left the United Nations General Assembly in stunned silence because Obama has accused Russia and China of all the recent breaches of international law of which the USA is demonstably guilty, the propaganda departments of western governments seem to have totally lost their grip on reality.

So You Still Think It's A Good Idea To Get Involved In Syria?

The reason why The Pentagon underestimated Syria