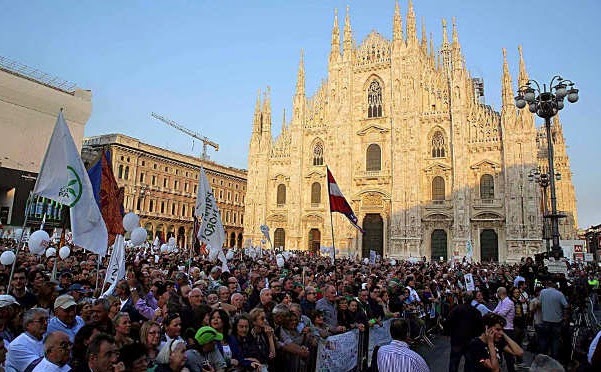 We are accustomed in our libertarian blogs, The Daily Stirrer and Boggart Blog, to mentioning the Five Star Movement led by Beppe Grillo whenever the topic of anti E U feeling in Italian politics is in the news. This is perhaps unfair to Italy's oldest anti EU party, Lega Nord, (The Northern League,) led by the rising star of the Italian right Matteo Salvini.

While it is probably unfair to describe Lega Nord as 'right wing' (they are Libertarian) the party is a strong opponent of the cultural Marxism of European and American consensus politics.

One of the Norther Leagues problems is that since its founder, Umberto Bossi, always pursued a separatist agenda, arguing that the highly industrialised north of Italy should split from the economically agrarian and politically conservative south, the party was seen as a regional political force only. Now however, The Northern League has launched a political campaign aimed at winning support in the southern regions, with a view to eventually forming a national government.

Though previous designs on making the regional party a nationwide force have failed, the party is gambling on Salvini's popularity, his anti-immigration, anti-EU stance and the growing feeling that further integration of EU member states being demanded by Brussels threatens national sovereignty and cultural identity, to turn them into a national force.

"We will make it into power. I don't know when, but we will get there," Salvini told reporters at a press conference launching the campaign..

Party leaders said membership in the new effort is open to any Italian not already in office, though politicians' bids to join the movement will also be considered on a case-by-case basis.

Salvini said it is an attempt to avoid "recycling" certain politicians who may be hoping to take advantage of the party's momentum, which is being spurred by his steadily growing popularity. (Now who do we think he could be referring to? Signor Berlusconi perchance?)

A recent poll ranked Salvini just behind Prime Minister Matteo Renzo on Italians' list of favourite political leaders. His rise has been compared to Marine Le Pen, leader of the far-right National Front in France.
Salvini is a  fan of Le Pen, who has softened the hard-right image of her party and broadened its appeal as voters across Europe have turned to populist parties in a backlash against the Brussels bureaucracy and the economic gloom engulfing much of the euro zone.


More posts on the Immigration issue throughout Europe