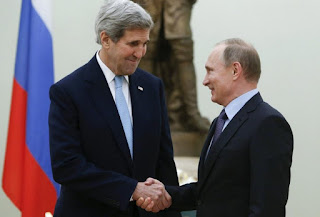 In October we reported that a Russian general walked into the US Embassy in Baghdad to inform the US government's senior official in the war zone that airstrikes in Syria would start in 1 hour. It was apparent then that the US strategy (defeating ISIS was of secondary importance to overthrowing Assad in Syria had not only failed but fallen apart, leaving the Obama administration with no way of saving face.

At the time US Secretary of State John Kerry had met British Foreign Secretary Philip Hammond in London to discuss Assad's fate. "For the last year and a half we have said Assad has to go, but how long and what the modality is, that's a decision that has to be made in the context of the Geneva process and negotiation," Kerry told reporters after the meeting. "It doesn't have to be on day one or month one [and] there is a process by which all the parties have to come together and reach an understanding of how this can best be achieved."

A far cry from the hardline rhetoric the US was still clinging to back when that Russian General announced Vladimir Putin was taking control of efforts to defeat ISIS. Putin's line of the future government of Syria was, as it has always been, "Assad stays".

What was clear from the communique issues after the Kerry / Hammond meeting was that the western powers had tacitly recogniised what was obvious to impartial observers from the very beginning: the US backed effort to assist Qatar and the Saudis in overthrowing the Assad regimed and destabilizing Shia and secular regimes in the middle east was doomed from the start.

About a month later, ahead of talks in Vienna, WSJ said the following about Washington's plans for Assad:

The Obama administration entered a crucial round of international talks on Syria’s war prepared to accept a deal that leaves President Bashar al-Assad in place for several months or more during the transition to a new government.

The U.S. shift on the dictator’s future caps months of backtracking on the most significant obstacle to a resolution of the Syrian conflict. While U.S. officials once argued Mr. Assad couldn’t take part in a political transition, they have gradually eased that stance, eventually signaling he wouldn’t have to step down immediately. Now they are planning to negotiate the question of his future in talks being held Friday in Vienna.

The solution Washington sought to broker would “not prejudge the Assad question,” a senior administration official told The Journal.

Of course the Assad "question" has already been "prejudged" - only not by Washington or any of its regional allies. Tehran was never going to allow a US puppet government to be installed in Damascus. Putin was never going to cede his only naval base on the Mediterranean because s US puppet in Syria ordered Russia out. And China was always going to stand by its allies, Russia and Iran.

Losing Damascus to Washington and worse, to Islamist nutters in Riyadh, would cut Iran's supply lines to Hezbollah and diminish Iranian influence in the region. For Russia, it was not just a case of their naval base on Syria's coast (now expanded to be a military headquarters with an air base and an army supply depot), had the US / Saudi axis managed to gain control of Syria it would have opened the way for Washington's long term ambition for a pipeline from the Gulf states to the Mediterranean coast to be fulfilled. This would have enabled the USA and its allies to undermine Russia's oil trade. And Russia was never going to stand for that either.

Establishing a foothold in Syria is of course the first step for The Kremlin on the way to supplanting the US as Mid-East superpower puppet master. Even if Assad is ultimately deposed by his Syrian opponents, the Shia regime will remain in one form or another.

On Tuesday, Kerry was in Russia for talks with Vladimir Putin. As Foreign Policy magazine comments, America's top diplomat was "wicked psyched" that he found a Dunkin Donuts in Moscow. He was also probably "wicked psyched" at the dose of reality he had to swallow on Syria.

Associated Press reported, "U.S. Secretary of State John Kerry on Tuesday accepted Russia's long-standing demand that President Bashar Assad's future be determined by his own people, as Washington and Moscow edged toward putting aside years of disagreement over how to end Syria's civil war."

"The United States and our partners are not seeking so-called regime change," Kerry said, adding that the focus is no longer "on our differences about what can or cannot be done immediately about Assad."

That is a testament to the fact that the Obama administration and mainstream media in the west are beginning to understand just how weak America's negotiating position has become due to its failure to deal with Assad. but with a President who in his first campaign admitted to being a terrorist sympathiser what else could anyone expect.

A pan - European Army is a step closer to becoming a reality, 18 months after Liberal Democrat and former Deputy Prime Minister Nick Clegg described warnings from Eurosceptics warnings that the EU was aiming to expand its powers by grabbing control of member nations' military defence capabilities a dangerous fantasy.

Europhiles like Clegg have gone quiet as the EU Commission President Drunkard (Jean - Claude Juncker who is reputed to have brandy for breakfast) has advanced plans for a European army. Having initially dismissed fears about this latest power grab by Brussels as Eurosceptic scaremongering and treated those who pointed out that these plans to expand EU central powers are never 'simply rumour with derision and contempt, the traitors who are pushing independent nations towards a Federal European Superstate are now exolling the idea.

More EU equals A Better World, the bleat mindlessly, in spite of evidence to the contrary amassed over the past forty years. The treatment of the EU army warnings when the plan was first announced is deftly swept under the carpet by media lapdogs, as top EU policymakers, using the middle east conflict as justification, have elaborated upon their ideas for a pan-European Border and Coast Guard force.

It is now apparent however that the plans are not just under consideration, but already well advanced, with the powers that would be given to an EU army going further than anyone thought possible. Documents outlining what an EU army would look like, including the ability to take control of national borders without the consent of the government of the nation in question have been leaked by parties concerned for the future of their nations.

In theory, if implemented in its present form the plan would mean EU army troops under orders from Brussels (i.e. Berlin) could take over border controls and sieze military installations from countries like the United Kingdom without consulting the country’s leaders or elected representatives. In reality we know all our top politicians and elected representatives are shits whose only concern is to stay on the gravy train, so they wouls sel out their country in the blink of an eye.

According to the Times, the proposals for a 2,500-strong border and coast guard force could see armed personnel first deployed to areas like Greece or the Balkans.

Critics of the plan liken the idea of primarily German soldiers seizing power across Europe to the Second World War. Bruno Waterfield and Francis Elliott report: “The force, wearing blue armbands and an EU and agency insignia, would be equipped with naval patrol vessels, helicopters and drones, according to plans tabled yesterday by Jean-Claude Juncker, the European Commission president”.

Almost 18 months ago, UKIP’s leader, Nigel Farage, warned of the plans for an EU army in a big, pre-European Parliamentary Elections debate with then Deputy Prime Minister Nick Clegg. Europhile Clegg called Mr. Farage’s warning a “dangerous fantasy”. He said: “The idea there’s going to be a European air force, a European army, it is simply not true. This is a dangerous fantasy… it is not going to happen”.

The European Union’s chiefs have clearly seen the migration crisis as an opportunity for further expansion. The plans published are set to portray further EU expansion as a way to control, rather than open Europe’s borders further.

The news has been described as a “full frontal power grab” by UKIP’s spokesman Diane James MEP while Poland’s foreign minister has said: “For it to be a structure independent from nation states is astounding . . . an undemocratic structure reporting to no one knows who”.

Funding for the force would reach €322 million by 2020. The traitor and war criminal David Cameron is said to have already pledged his support for the new force which represents a further erosion of national sovereignty.