The Harvey Question - A Scumbag or Typical Of Hollywood?

Marilyn, the two Corey's, Polansky's Victim, abuse is par for the course in Hollywood. 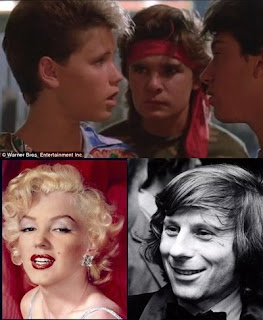 We have been gobsmacked by the hypocrisy of Hollywood luvvies and liberal politicians in the USA as they have hurried to jump on the latest politically correct bandwagon and condemn Harvey Weinstein for the way he exploited his position as the most powerful producer in the film and television industry to bully and coerce young actresses into granting him sexual favours in order to advance, or in some cases preserve,) their careers. This should not be interpreted as implying The Daily Stirrer approves in any way of Weinstein's behaviour. He's a pervert.

What bothers us however is that not only were his antics widely known throughout showbusiness, in the media and to the political establishment for decades before The New York Times decided to take him down for reasons we may never know but can hazard a guess that it might relate to the fact that truth seekers were getting too close to prominent people the NYT had an even more compelling reason to protect.

The kind of abuse Weinstein inflicted on attractive young women who found themselves either beholden to him or needing a favour from him has been par for the course in Hollywood since the 1920s. One of the biggest victims of the exploitation and abuse culture was Marilyn Monroe, (the linked info is a private blog - if you don't consider it a reliable source just enter "Marilyn Monroe abuse" in your preferred search engine,) who was abused throughout her career and whose early death has been attributed to the treatment she received at the hands of the Hollywood elite.

Given they way Hollywood has behaved in closing ranks to protect those involved in scandal over the years we should believe the worst of all the rumours and allegations that come out. The habit liberals have of jumping on any politically correct bandwagon is deplorable, but made all the more so when we contrast the way many of those now lining up to condemn condemn Harvey Weinstein, (against whom, it must be said, nothing has yet been proved,) have campaigned for the pardon and rehabilitation of the convicted paedophile and rapist Roman Polansky. One must suppose that where the accusations that took down Weinstein came from established actresses, the twelve year old girl Polansky was convicted of abusing was "nobody" and thus in the warped morality of the fame junkie mindset, is of no consequence.

There are hundreds of other stories on course, one of the most shocking and most available being the revelations of actor Cory Feldman, who alleged in 1993 he was was anally raped by powerful people in Hollywood while a highly successful child star in the 1980s. A condensed version of his book Coreyography was serialised by UK newspaper The Daily Mail. Feldman also reports his co star Corey Haim suffered simlilar abuse. Unfortunately Haim took his own life in 2010 after a long battle with drug addiction. Feldman claims he and Haim were introduced to drugs by their abusers. Ignore those who will tell you The Daily Mail is a disgusting right wing arag that only prints lies. Its style is sensationalist and designed to ppeal to readers' baser instincts, but it's reporting of this story sticks with what Corey Feldman has said and his friend Elijah Wood has confirmed.

It is easy to condemn Harvey Weinstein, he is now a soft target. He deserves all the condemnation, the ostracism and whatever penalties the justice system sees fit to impose. But as a result of this case we should examine ourselves too, and the celebrity culture we have allowed ourselves to be sucked into. Actors, musicians and writers entertain us but that does not place them, nor the people that produce and promote their work, above the law.

To be able to control the minds of the population has been a goal of governments from Nazi Germant and Stalinist Russia to leaders of the ironically described 'free world' today. Here is information on one of the social engineering programs governments are using, MK Ultra.

Corruption in the music industry
Have you ever wondered where it all went wrong for the music industry, how popular music became dominated by the tribalism, misogyny, violence and hate of gangsta rap, hip hop, drum and bass and all the other sub genres? Click the link above to find out ...

The Pretensions Of Pop Culture And The Death Of Intellect
It’s part of a distressing pattern these days of overwrought commentary about popular culture. As well as Beyoncé thinkpieces there are the Stars Wars thinkpieces, of course, and the Lana Del Rey thinkpieces or, God help us, even Kanye West thinkpieces. Don’t get me started on the fact that “thinkpiece” is now treated as if it were a single word...

Pretend Gangsta Pharrel Williams Advises Europe's Politicians On Migrant Crisis.
Latest in a long line of performers eager to prove that people who pretend to be things they are not for a living should be content to recite the lines written for them and not offer us their own idiotic thoughts is Pharrell Williams who is famous for wearing silly hats. Mr. Williams has elected himself as spokesperson for oppressed minorities on the topic of Europe's immigrant crisis.

In Praise Of Sluts - Tits Out For The Boys Miley
In the last 24 hours both Marianne Faithfull and Jacqueline Bisset have criticised today's young women for dressing provocatively, the teasers for a story in today's news said. Marrianne Faithfull, no slouch in the sluttiness stakes herself back in the 1960s but to a teenage male all the more appealing for that (I still get a little tingle when I look at a Mars Bar), told ITV News that Miley Cyrus, Rihanna and other good looking young pop tarts are, quite simply, sluts. She gave her reasoning thus:

Henry Kissinger On The New World Order
OK, let the Politically Correct screechers screech 'conspiracy Theory'. Kissinger has of course been a long time advocate of corporatist global totalitarian government by elitis oligarchs and has himself used the phrase New World Order to describe what he sees as the best hope for the future and what those of us outside his small elitist clique see as fascism

Ukraine Government Fires Missiles At Rebel Held Targets
Leaders in Washington, London, Paris and Brussels continue to pump out the propaganda against Russia as they try to provoke a war over the alleged shooting down of Malaysia Airlines Flight MH17 over Ukraine by separatist rebels supported by Russia. But in spite of claims by Obama and Kerry that the US have evidence that proves it was the rebels wot done it, the more evidence we see, the more likely it looks that the Ukraine government in Kiev was responsible.
Germany Axes Canada-EU Trade Agreement, This Will End TTIP Stitch Up Too

We are winning. Well today we are at least. News broke over the weekend that Germany intends to junk the Canada Europe Trade Agreement (CETA), a template for the much bigger and therefore more threatening to freedom and democratic rule Trans Atlantic Trade and Investment partnership (TTIP). So it looks as though the shockwave of the European Parliament elections has awoken politicians to the anger of voters throughout Europe with the dicatatorial attitude of the EU.

Mind Control: How It Works and how The Elite Use It
Mind control, the ability of science to deliver a completely compliant and uncomplaining population. It had been the goal of tyrants for over a hundred years, just as the ability to control human minds and turn us into humandroids has been the goal of mad scientists. But is such scientific advance getting uncomfortably close to reality?

Major Disaster Needed To Save The New World Order? What!
A member of the new elite publicly calling for a major disaster to get the push for the so - called "New World Order" and global government back on track? Could there be any more blatant warning that a false flag event or man made catastrophe that will shock the world is coming our way? Read the article and learn that those crazy conspiracy theorists have been telling the truth all along.
Paedophile Former BBC Chauffeur Implicated In Jiummy Savile Scandal Found Dead

The longer this Jimmy Savile paedophile case goes on the worse the stink gets. The establishment is as corrupt as a three month old plague pit.
New World Order
Is there really a shady group of super rich individuals who are collaborating to overthrow the free nations and establish a global oligarchy, Novus Ordo Seclorum, the New World Order,. You have heard all the conspiracy theories, now see the evidence.

Scientific Dictatorship: Totalitarian World Government Is Not A New Idea
Philosopher mathematician and elitist left wing intellectual Bertrand Russell wrote at length of the need for a totalitarian world government to which nations would surrender sovereignty and individuals free will, in his 1952 book The Impact Of Science On Society. The Scientific Dictatorship was not a new idea even then ...

So You Think "THE NEW WORLD ORDER" Is Just A Nutty Conspiracy Theory?
Many of us libertarians, lovers of individual treaty, of national community and ethnic cultures have written of the movement towards globalism with its focus on suppression of cultural and religious differences have been called conspiracy theorists, right wing nut jobs etc. for many years. But is the political right is about power and control, surely libertarianism is the antithesis of that? Read what the global elite say about The New World Order in their own words, then decide for yourself if the conspiracy is just a theory.

Will War On Terror Become The Perpetual War Of George Orwell's '1984'
Perpetual war, shadowy secret governments and a constant tide of propaganda aimed at inducing a state of fear and paning in the population. A synopsis for a new dramatic production of George Orwell's '1984' the paranoid ravings of conspiracy theorists or an accurate picture of what is happening in our world? Read the articles and others on this site and make up your own minds.

A Sense Of Self - Are We Forgetting How To Be
In the 1920s D H Lawrence said; "Mankind has to get back in touch with the rhythms of nature." Instead we moved away from nature and towards technocracy and now we face pandemics of depression and stress. Materially we in the west are better off than any generation before us. But somehow our ancestors and people in poor nations seem happier. Have we forgotten how to be and thus lost sight of who we are?

They Who Would Be Gods
When humans try to soar above mortality and reach thegods, it must end in disaster. That is the message of the Greek myth of Icarus. The lesson seems to have been lost on the scientific elite however. They are pushing ahead with their globalist agenda t..