In an earlier post today we discussed the increased tensions in Europe following the insane decision by the USA's Obama Administration to place long range missiles in EU nations close to the Russian Border, and the entirely predictable response from President Putin that Russia will respond by putting a similar threat to NATO nations in place.
Today we learned a US military convoy has entered the Czech Republic to participate in the Saber Strike-2016 exercises in the Baltic states. "One day we will wake up and see that US troops are here to stay forever," Czech Senator Jaroslav Doubrava commented in a radio interview yesterday. 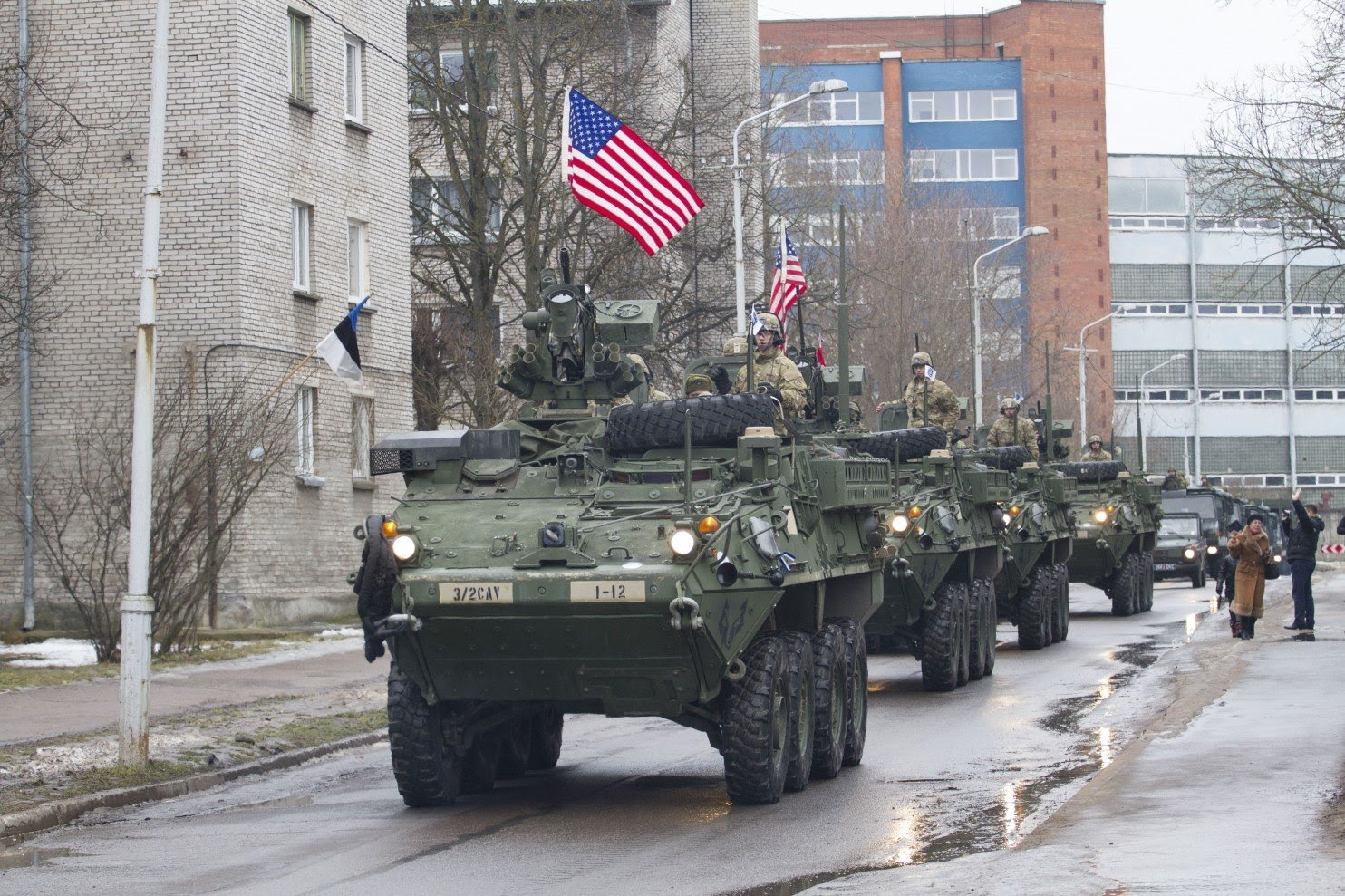 US Military convoy (source)
“These convoys are provoking the Czech people who have traditionally been wary of having foreign troops in country. This is also a provocation against Russia and I’m afraid that all these US military convoys and military shows are simply meant to lull our vigilance, make us used to this,” Czech Senator Jaroslav Doubrava commented during the interview.

Jaroslav Doubrava added "The Czech Republic, together with its V-4 partners (the Visegrad Group of countries, comprising the Czech Republic, Hungary, Poland and Slovakia, supporting the initiative to strengthen NATO's capabilities on the alliance's eastern flank), is ready to set up a company for permanent deployment in the Baltic states."

The proposal will discussed during the upcoming NATO summit in Warsaw.

A few days ago Prime Minister Bohuslav Sobotka assured his Lithuanian colleague that the Czech Republic was ready to cover the Baltic states’ airspace amid the imagined threat by Russia.

When asked about Czech media speculating about the threat top western security posed by Russia’s ability to occupy Lithuania, Latvia and Estonia in a matter of just three days, Jaroslav Doubrava dismissed it as “sheer paranoia.”

US Missile Shield; Loved Up Obama And Cameron Laugh As Putin Warns Poland, Romania Now In The "Cross Hairs" 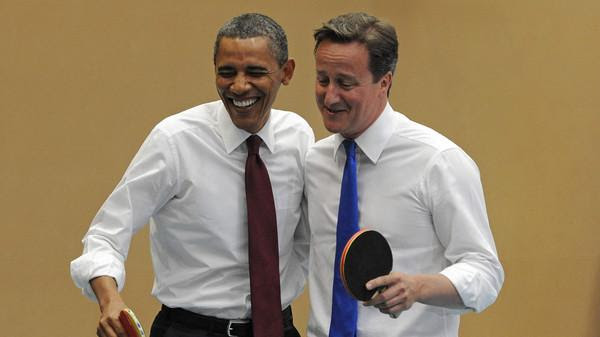 So in love: Obama Cameron Bromance could threaten world peace
This blog has warned many times of the inevitable consequences of President Barack Hussin Obama's repeated attempts, both directly and via his proxies in Ukraine and Turkey to provoke the Russian government. It did not start with the Obama Administration of course, US dominated NATO and US allies in the EU many years ago breached a treaty agreed with Russia in 1991 by puling former Warsaw Pact nations such as Poland, Hungary and Romania and former Soviet republic including Lithuania, Latvia and Estonia into the European Union and NATO.

Throughout the era of the current administration however, the provocations have become more frequent and more difficult for the Russians to ignore. The latest, moves by The USA to create as 'missile shield' by placing missile sites in European nations that border Russia is not so much an insult as an act of aggression. While The White House and The Pentagon claim the move is an essential defensive tactic in the face of Russian expansionism, that is blatantly untrue. By no stretch of even the most lurid imagination can the move be considered anything but a threat to Russia by the US.

And it was never going to be allowed to go unchallenged.

While Obama was in japan, getting jiggy with his bum chum Cameron and making a fool of himself at Hiroshima in a historic trip by including in his speeches warnings about the dangers of nuclear power while contempraneously, as commander in chief of US military services, being responsible for moving the world closer to nuclear war, Russian president Putin was in Greece resuming what he started a year ago, ahead of the turbulent Greece "referendum" by drawing the Greek government away from the EU and NATO and towards Russia. Economic sanctions and capital controls imposed by the EU on a small nation crippled financially by membership of the Euro single currency zone, following the collapse and bail out of the basket case economy have turned Greek people increasingly against remaining in the European Union and the euro single currency, a shift of public mood Putin certainly hopes to capitalize on.

Greek Prime Minister Tsipras commented on twitter: "Greek-Russian relations are an important element of our active, multidimensional foreign policy. We have upgraded our political dialogue 1/2 ... His [Putin's] presence in Athens marks the strengthening of our relations during the past year. 2/2

But it wasn't the latest Greek contact with Russia that made Putin's trip notable, it was the warning the Russian leader issued in response to the most recent US/NATO provocation in Europe that should concern us.

On May 12, in a dramatic development for the global balance of power, which recently has shifted eastwards following Putin's success in neutralising the threat of Islamic extremism in the middle east following the Obama administration's ineffectual interventions against terrorist groups (that have actually turned out to be backed by the US via its mid east allies Turkey and Saudi Arabia, the United States announced details of its European missile defense system dubbed Aegis Ashore. With typical ineptitude the first installation was at a remote airbase in the town of Deveselu, Romania, almost a decade after Washington proposed protecting NATO allies from Iranian rockets (Iran has no missiles that could reach Romania, but it has weapons that no surface to air missile could stop - you're not supposed to know that BTW). Despite repeated Russian warnings that the West is threatening the peace in central Europe, Obama has gone ahead, driven probably by his ego following the failure to depose President Assad in Syria.


The US move represents a clear defection from established Game Theory equilibrium in the aftermath of the Cold War nuclear arms race, one which explicitly removed a Russian "first strike threat", pressuring Russia to install further nuclear offensive and defensive measures: "the precarious nuclear balance of power in Europe has suddenly shifted, and quite dramatically: despite U.S. assurances, the Kremlin says the missile shield's real aim is to neutralize Moscow's nuclear arsenal long enough for the United States to make a first strike on Russia in the event of war."

No surprise then that during a joint press conference with Alex Tsipras in Greece, Putin warned Romania and Poland they could find themselves in the sights of Russian rockets because they are hosting elements of a U.S. missile shield that Moscow considers a threat to its security. Under the malign influence of Washington and Brussels these country's leaders have now exposed their people to the threat they most feared.

According to Reuters, Vladimir Putin issued his starkest warning yet over the missile shield, saying that Moscow had stated repeatedly that it would have to take retaliatory steps but that Washington and its allies had ignored the warnings. We do not know what setps Mr. Putin has on mind but the embedded image from RAI Novosti should give even the Pentagon's gong ho dickheads a clue:

Putin insisted that Russia was not making the first step, only responding to moves by Washington. "We won't take any action until we see rockets in areas that neighbor us."

"We have the capability to respond. The whole world saw what our medium-range sea-based missiles are capable of [in Syria]. But we violate no agreements. And our ground-based Iskander missiles have also proven themselves as superb,” continued Putin.

Further undermining the Pentagon's provocative narrative that the US missiles are purely defensive, the Russian president said the argument that the project was needed to defend against Iran made no sense because an international deal had been reached to curb Tehran's nuclear program. The missiles that will form the shield can easily reach Russian cities. "How can that not create a threat for us?" Putin asked.

Once Russian SS-26 tactical missile systems are again to be found on the borders of a Europe which suddenly as facing not only a a nuclear-armed opponent on its borders, but an ongoing - and in many cases malicious - immigrant influx within, while being stabbed in the back by its supposed allies, Washington's war loving neo-cons, then all the bollocks about the peaceful future of the European continent, the main stated reason behind the creation of the EU and the Eurozone, will be meaningless.

The Hidden Genocide In Syria:Obama's Moderate Rebels As Brutal As ISIS
The Last Accredited Western Reporter In Damascus Speaks: "Russia Did More 'Good' In 30 Days Than The US Did In A Year"
Germany Involved in NATO War Games Near Russian Border
After Yugoslavia NATO changed from a mutual defence alliance to an organisation for military aggression.
Russian Foreign Affairs Dept Accuses Turkey Of Hindering Syrian Peace Talks
Armed Forces Minister: Obama ‘Woefully Ignorant’ of Threat EU Membership Poses
Obama Deploys 250 Special Forces to Syria: Will They Depose Assad?
Obama Bids To Persuade Britons To Sacrifice Their Nations Independence To Serve US Geopolitical Interests
Irony Overload: Iran Warns Obama Not To Cross Red Lines
Support For EU / US Sanctions On Russia Declining In Central Europe
Obama Launching Massive Military Intervention In Libya And Iraq
Will There Be A Coup In Turkey?
Castrating Project Fear: Former-UK Army Chief Shoots Down Claims of Brexit Impact on NATO
Propaganda War: US Officials Working to Keep Russia, Europe at Odds
Fear and Panic: EU Defence Budgets Boom Amid ‘Russian Threat’ Paranoia
NATO Rhetoric About Russian Threat is 'Absurd'
Is USA preparing for all out war with Russia?