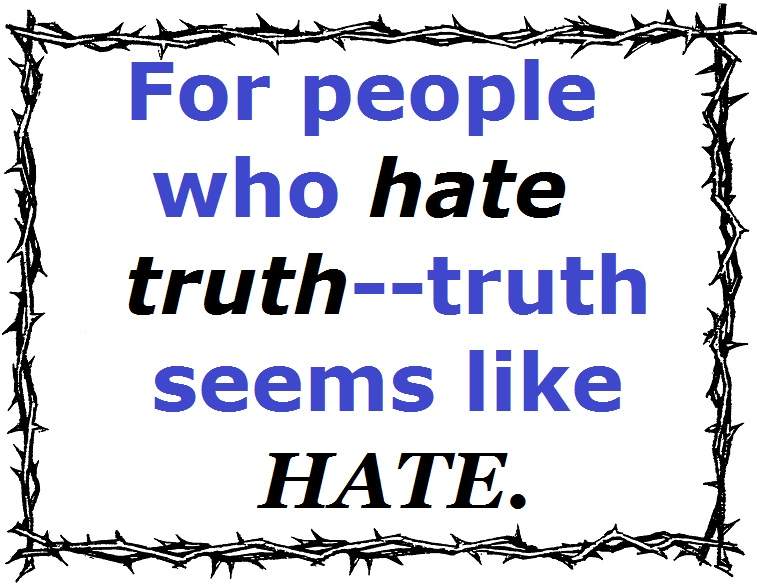 Former US Democratic Party presidential candidate Howard Dean, a man never slow to pontificate on topics he does not understand, has gone on record as saying that "hate speech is not protected by the first amendment." Well Dean might have a point, but being known for embracing every wimpish meme that circulates among the hand wringing, breast beating, wailers and teeth gnashers, we have to ask "What does he define as hate speech".

In his recent outburst about protecting free speech by suppressing free speech, Dean was opposing a proposed speaking engagement for columnist Ann Coulter, whose ideas, which include controlled immigration, deportation of those in the USA illegally, and building border walls, are so offensive to Dean, that even the most fundamental freedoms cannot be allowed to endure if they allow those ideas to be expressed.

Dean no doubt believed he was striking a great blow against the fascists who would deprive us of our fundamental rights in trying to stop Coulter being heard by branding her words 'hate speech.'. However, hypocritical as any left wing stereotype, Dean wants to attack free sppech to suppress any ideas he disagrees with, while defending those who use their right to free speech to advocate genocide, mass murder, terrorism and the destruction of human society. Against all of that shite Ann Coulter's enthusiasm for a border wall looks pretty tame.

If Howard Dean is really all that deeply concerned about 'hate speech,' first he ought to provide a better definition than, 'its whatever I say it is'. Second, he ought to take an objective look at the policies promoted by people at the same end of the political spectrum as him. There he is likely find a lot more of it among socialists and liberals than among conservatives like Ann Coulter.

Recently we commemorated another Karl Marx Day, which is sometimes euphemistically referred to as May Day. This time, there were riots in Paris as “protesters” committed all sorts of vandalism, assault, and mayhem. In addition to the standard Che shirts and the like, there were actually people holding banners with Stalin’s face on it! These people have obviously heard from their lecturers in propaganda passed off as history that Stalin was a communist and being to thick and lazy to look up Stalin and learn what a brutal repressive tyrant he was, they worship him as a hero of the war angainst sanity.

In the past few months at UC Berkeley in particular, various Antifa groups have inflicted physical violence and verbal bouse against anyone they deem to be a fascist. Antifa apparently defines a fascist as anyone who disagrees with them aout it being OK to use violence to silence opposition. The Anftifa mobs have pepper sprayed women and hit men with bike locks. These folks certainly aren’t run-of-the-mill leftie wimps. Indeed, as Antifa has so helpfully told us, "Liberals get the bullet too."

This shouldn’t be particularly surprising. Going back through the twentieth century communists generally fall into two categories; 1) Mass-murdering, totalitarian dictators when in power and terrorists when not-in power; 2) Lying, conniving cunts who preach equality but are quick to suck up to the super-rich once they are within touching distance.

Jew hating Leftie Students Union In New Anti-Semitism Row
Those anti Semites of the The National Union of Students (NUS) are at it again. [ ... ] Hypocrisy and double standards are the stock in trade of the ‘new left’ of course and the anti – Semitism of Labour voters and other younger lefties (University dumbed down airheads who are too historically illiterate to be aware of the role Britain’s Jewish communities played in establishing the Labour Party


Politically Unbiased(!) BBC Launches Left Wing Attack On Donald Trump For Illegal Immigrants Stance
We have mentioned that the terms of publicly funded broadcaster The BBC's charter requires that it be completely fair and non partisan in its political civerage. In recent years however, the BBC's bias towards the politics of the left has become blatant. Furthermore, while BBC bosses try to preach a politically correct message via their comedies and dramas, commercial stations are making better quality programmes.

Politically Unbiased BBC Launches Left Wing Attack On Donald Trump For Illegal Immigrants Stance
The BBC, Britain's publicly funded broadcaster is bound by a charter which commits it to be balanced and non partisan in its news reporting. Repeatedly however, the BBC, its management now doniated by left wing luvvies is becoming more and more blatantly left wing in its unbiased reporting

The BBC will not accept any criticism when it comes to anything of a political nature. They would never back down.There is, it seems, no one in the entire institution who is not radically left wing and they are waging ideological war against the general population and against British culture and values.

YouGov analysis of Labour supporters also finds most Mr Corbyn's backers see America as the 'greatest single threat to world peace' in revealing research. And they call us conspiracy theorists ...

Social Science Degrees Make Great Leaders? More Junk Science.
We've had junk science on climate change, genetically modified seeds, many types of medicines and social engineering. The junkiest of junk science however is always commissioned by public service organisations and is aimed at convincing the public that our public servants are doing a good job. Fortunately the public are not as gullible as our leaders suppose.

In yet another example of how out of touch with reality our leaders are, Theresa May announced on BBC Radio 4's Today programme that the "British" government's determination to make "hate," "extremism" and "Neo-Nazism" illegal.

Labour Scourge Of Tax Avoiders Is A Tax Dodger? WTF is going on?
We have often made points about the hypocroisy of the left, particularly those lefties, but surely Margaret Hodge (nee Oppenheim - the diamond people) is the undisputed champ of left wing hypocrites. As a senior Labour MP Margaret was always eager to condemn tax avoidance. Unfortunately like most self righteous Labour millionaires she did not practice what she preached.

Millie Tant, Tatchell's Transphobia and Germain Greer's Big Hairy Smelly Vagina
The well of hypocrisy from which the left, champions of freedom, democracy, equality and free speech in their own estimation, draw their dishonest, self rightoeus views on the world is bottomless, it will never run dry. How else could it have continued to flow during this latest two-faced display of authoritarianism from the lovers of all minoities even when those minoritites hate each other. It is the multual hatred of minorities however that is fragmenting the left.

Aid Organisations Using Ebola to Line Their Own Pockets
Just a couple of days ago The Daily Stirrer was slamming charities managers for using our money to line their own pockets. Now in a devastating attack on the charity sector, a Liberian official accuses charities of exploiiting ebola for gain.

The Red Cross is getting some well deserved stick after sacking 71 year old Brian Barkley, a volunteer for over twenty years. His crime was to have an opinion that differed from the politically correct dogma espoused by the self righteous, self interested left wing troughers who line their pockets via generous expenses and salaries for running the charity.

A Chronicle Of Decay
A Song Of Servitude
Revealed: the insance logic behind left's hatre and hypocrisy
The driving force of left wing hate