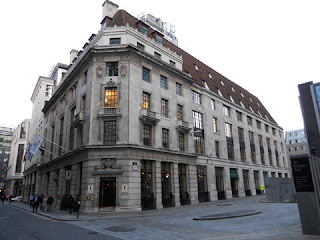 The Baltic Exchange Building - London
Most of the financial newspapers, tip sheets and web sites featured this story today (10 Nov, 2015). What is The Baltic Dry Index and why should it concern us ordinary punters?" you might well ask.

Most of the financial data reported in mainstream news is bollocks. GDP only measures the amount of money churning around an economy, while the CPI (Consumer Prices Index is constantly manipulated by swapping in and out the goods or services it looks at.

DEFINITION (from official Baltic Exchange website):
"The 'Baltic Dry Index' or BDI is a shipping and trade index created by the London-based Baltic Exchange that measures changes in the cost to transport raw materials such as metals, grains and fossil fuels by sea. The Baltic Exchange directly contacts shipping brokers to assess price levels for a given route, product to transport and time to delivery (speed).

'Baltic Dry' to use the finance industry's favourite contraction, is a composite of three sub-indexes that measure different sizes of dry bulk carrier ships - Capesize, Supramax and Panamax. Multiple geographic routes are evaluated for each index to give depth to the index's composite measurement."

'Baltic Dry' is also known sometimes referred to as the "Dry Bulk Index". 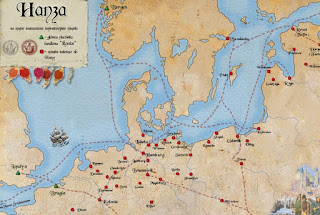 Cities of The Hanseatic League
The Baltic Exchange of London ((official site) was formally incorporated in 1744 in London at a time when was trade was expanding rapidly and there was a growing need for regulation. The name suggests the Baltic Exchange evolved from a system of brokerage dating back to the medieval Hanseatic League. Although the league was formed of German and Baltic city states in the thirteenth century and continued until the rise of nations states three or four centuries later, London was never a part of it. The Port Of London did however have very close links with the Hanseatic Ports and the merchants of Amsterdam, Hamburg, Bremen, Danzig, Tallin and Riga has agents in London to arrange passage of goods.

The history of London's financial centre, known as 'The City' because for many centuries up to the 1980s it was mostly contained within the boundaries of the old Roman walled city, Londinium, offers a fascinating insight into how the global economy developed and also to how this cold, wet island we Anglo Saxons and Celtic Scandinavians call home came to be the dominant world economic power between the seventeenth and early twentieth centuries. The banking system we are all familiar with, for example, was created by Nathan Meyer Rothschild after he moved his goldsmith business from Amsterdam to London and invented Magic Money, the stuff bankers produce out of a magicians hat.


The modern Baltic Dry is high - tech of course and deals are made by electronic communications rather than agents on the ground recording transactions in ink made from water, gum arabic and soot, with quill pens on vellum. It is still however one of the most useful measures of trade and thus of the real health of the global economy. If merchants, or corporate conglomerates are not moving much stuff, it means they are not buying and selling much stuff. Which is the reality we must place against all those optimistic GDP forecasts, and job figures which show record numbers of people holding jobs but do not tell us how many of those jobs are really half jobs (part time) or in the case of a young woman I know who after a spell of unemployment was offered a job that provided one hour paid world a day, one seventh of a job but for the government bean counters enough to mover her from unemployed to employed in the statistics.


The Baltic Exchange publishes the Baltic Dry Index (sic), which provides up to date pricing information for the cost of shipping of categories of cargo along different trade routes. The index is also used by economists and investment analysts to calculate from the demand for shipping versus shipping capacity, the level of activity in world trade, rather than those produced by people who create wealth with mathematical models of the economy..

What The latest News Means 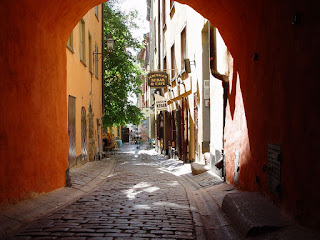 Forward to the past - a scene in Gamla Stan, the commercial centre of Hanseatic Stockholm
At this time of year analysts expect the index to be high, demand picking up in late summer as businesses build their inventory against seasonal demand, and mid November is about the latest time to get cargoes from the far east or South America to Europe in time for the peak season for retail. Reliable measures of global economic activity usually rise from mid-summer to Thanksgiving. This year Baltic Dry has not risen, in fact from a serious low in summer, it has sunk even further.

The reason is that as the global economic engines slow and the economic reality masked by over valued global stock markets, with record levels driven by automated algorithm trading by machines programmed to follow the market trend suggests a massive deflationary wave is on the way. We should remind ourselves every time some grinning news frontman or woman enthusiastically tells us Stock Markets in New York or London have set a new record high, the indexes they refer to are only looking at a very small bundle of shares in successful companies. The FTSE (pronounced footsie) 100 is the Financial Times 100 Share Index, covering 100 of the best performing companies traded in London. The Dow Jones Industrial is similar.

At yesterday's level of 631, Baltic Dry Freight Index was at its lowest level (inflation adjusted) in history for this particular time of year. It is also within a whisker of an all-time low.

What does this mean? The only way to interpret this downward movement in the Baltic Dry is that there is more cargo capacity available from shipping companies that there are cargoes available to make the business of moving goods across the world an economically viable proposition. In other words, far from the leading economies booming( e.g. the UK and USA where economic forecasts have gone from positive to euphoric this year as far as Joe Ordinary is concerned it feels as if we are still in recession. In fact this new slowdown on top of the ongoing depression is a far greater threat to peace and stability than ISIS.

This will not really mean much to you and me, (assuming you are not a banker or financial trader) but it does mean the only practical solution to saving the environment is being imposed on us by circumstances (I'm not a Carbon Dioxide scaremonger, there are many things damaging the environment: population growth; deforestation; dumping toxic substances in the seas and rivers or in wilderness areas and most of all our throw away culture), by cutting back on what we consume we all contribute to relieving the pressure on the ecosphere. 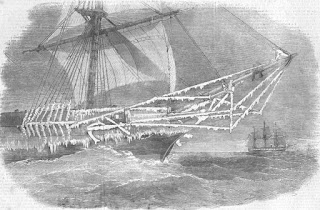 Baltic Traders face a hard winter
Posted by Boggart Blogger at 9:04 AM No comments: