Obama Deploys 250 Special Forces to Syria: Will They Depose Assad?

President Obama, with the full support of his Sunni Muslim partners in crime Turkey, Saudi Arabia, and Qatar, claim to be fighting ISIS yet western journalists on the ground in Syria report the US led campaign is constantly bombing those groups fighting the extremists?

On Monday (25 April,) Barack Obama announced the USA is sending an additional 250 US special operations forces into Syria. This immediately led to speculation that the USA is about to become embroiled in yet another Middle Eastern quagmire.

White House press officers say the deployment of Special Forces is intended to repel Daesh extremists. With no signal of cooperation from the Assad government or the Syrian-Arab Army combating the extremist group, it is difficult to see what difference 250 men would make when Iran already has a large force supporting Assad's army. Independent analysts have therefore questione whether the Obama Administration is trying to defeat ISIS, or still has regime chanhe as its main priority and has sent these troops to depose Assad.

On Tuesday, Loud & Clear’s Brian Becker in a discussion with with political analyst Issa Chaer of the Syrian Solidarity Movement to discuss the fresh deployment, as well as the US’ endgame strategy in Syria five years after the start of the civil war.

This announcement raises a number of questions," says Chaer. "First of all, is there a failure of the present tactic the US has employed to tackle Daesh in Syria? Raising the [total] number from 50 to 300 raises the question of what the existing 50 Special Forces have been doing for years – are they there for surveillance or are they working with groups on the ground?"

Chaer argues that the plan to dispatch additional US Special Forces troops will likely be counterproductive, as the US has not given any indication of collaborating with the groups presently combating Daesh, including the Syrian-Arab Army and Kurdish fighters.

"I think it is a mistake to do, but I think the US is protecting the opposition to the Syrian government to the benefit of Daesh. They are protecting the Saudi, Qatari, and Turkish interests."

Specifically, the Free Syrian Army, which has been fighting against Assad for years, claims that they are now cooperating with the US to fight Daesh. The White House often refers to the Free Syrian Army as ‘moderate’ rebels, suggesting that their participation is critical in the fight against Daesh. In reality many of the videos of beheadings, tirture and guys slicing open the fresh corpses of pro Assad troops and eating the still warm vital organis were carried out by members of this 'moderate' group.

Last week, Washington approved giving anti-aircraft surface-to-air missiles to the rebels, in conjunction with combat efforts in Syria. Notably, Daesh does not have an air force, suggesting that this advanced weaponry lacks any utility in that particular fight. Independent analysts suggest that this weaponry could be used by rebels to undermine Syrian bombing efforts against Daesh. 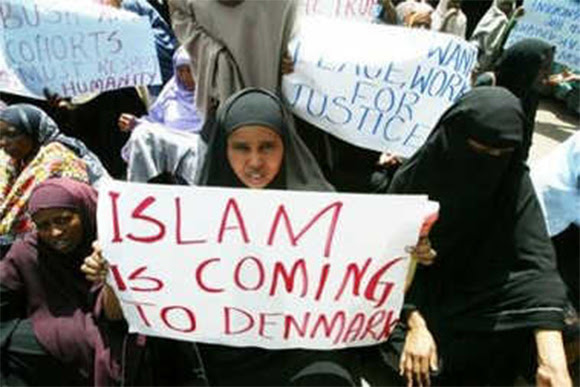 No prizes for guessing which migrant group is behind the astronomical rise in rape and sex crime in Denmark (Image source)
Less than one in five people brought to court to face criminal charges in Copenhagen is Danish, with the overwhelming majority being recently arrived migrants, official crime figures for 2015 publish by Copenhagen city police reveals.
Back in 2009, 67.6 percent of the cases brought to courts in Copenhagen involved foreigners, but the percentage rose to 77.8 percent last year. In particular the numbers of people from Romania and Nigeria being arrested is exceptionally high.

"We are spending increasingly more time on this and we have been forced to earmark resources to specifically target foreign crime," inspector Jørgen Skov, of Copenhagen City Police, told Metroxpress newspaper, citing bureaucratic difficulties caused by EU bureaucracy in dealing with foreign criminals. "When a foreigner commits a crime in Denmark, it takes extra work and resources for the police to administer their case compared to a native Dane committing the same crime," he explained. Copenhagen mayor Frank Jensen of the Social Democratic Party promised that he would be working in close tandem with the police on the problem.

"Foreigners who come to Copenhagen to commit crimes are not welcome in our city. It is a worrying process that I am going to follow in close cooperation with the Copenhagen City Police," he said. Clearly, despite having done more to restrict the flow of career criminals, sex crime hobbyists, wannabe jihadists and general bastards from eastern Europe, Africa and the middle east into the country, Denmark is beset with similar problems to those faced by neighbours Germany, Sweden and Norway over immigrant crime.

Gerd Battrup, researcher in cross-border crime at the University of Southern Denmark, blames the present situation on the growing number of migrants, both legitimate and illegal, choosing Denmark as their destination.

"Copenhagen has become a center for crime because this is where people congregate. And with more foreigners flowing in, some of them will turn out to be criminals. At the same time there is much wealth and many tourists around, which could open the door to theft and burglary," he said.

"The foreigners are clearly over-represented, which is very alarming," he said.

Kofod Poulsen believes that massive border controls with thorough checks may keep many of the criminals out.