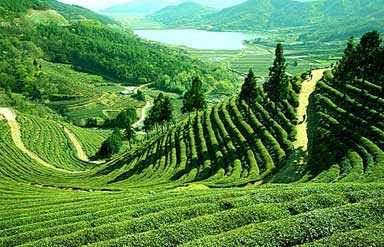 A tea plantation in Darjeeling - target of latest Greenpeace bansturbation session (Image source)
With the Paris climate change conference looming near (Slogan: I love you Flash, but we only have twenty four hours to save the Earth), governments, well governments in the developed world are falling over themselves to parade their environmentally friendly credentials before the world media. Well most governments in the developed world. Certain emerging economies do not seem so impressed as Cameron, Hollande, Merkel and Co. to embrace the loonitoons idealism of the capitalism hating left or the delusions of the wannabe God - King Obama, who on finding his administration has failed in every respect is now trying to use environmentalism to destroy the global economy.

The Indian government has just banned Greenpeace. The 'save-the-two-toed-toad activists are of course spinning this as a monstrous injustice and a blow for freedom of speech and a government / capitalist conspiracy against Mother Earth.

"This is an extension of the deep intolerance for differing viewpoints that sections of this government seem to harbour," Vinuta Gopal, the interim executive director of Greenpeace India, said in a press release. Well given their behavior in the climate debate it is hypocritical for any Greenpeace executive to complain about the suppression of free speech. How many left wing neo - Fascists have we heard demanding that 'climate deniers' should be thrown into prison.

Alternatively, you could argue, it’s the Indian government doing what not even Putin’s Russia was capable of doing when push came to shove (during the Greenpeace Arctic 30 affair): telling this richly-funded, pan-global outfit of anti - civilisation nut jobs, these lying, cheating, data falsifying malfeasant bleeding hearts, these wealthy, privileged meddlers exactly where they can stick their environmental Naziism.

The ban has been introduced on the legal grounds that Greenpeace has violated various commerce rules in the southern Indian state of Tami Nadu where it has its Indian headquarters. Allegedly it “fraudulently conducted business by falsifying balance sheets" and other code violations. Greenpeace is now contesting the charges.

But whatever the official reasons for the ban, it looks like the case is Prime Minister Narendra Modi and his government are flexing their muscles to show the green QANGO India’s economic development is not going to be hamstrung by the political meddling of left wing bullying masquerading as green activism.

The Government will be supported in this by the majority of his people, one thing the people of developing nations hate is western do-gooders telling them how to live their lives.India has environmental problems – such as the pall of smog that hangs over Delhi – just like anywhere else but it also has a burgeoning middle class eager for a better standard of living. Like China, India has made it clear that industrial progress comes before fashionable, politically correct Western liberal causes like "climate change".

They are also profoundly pissed off with western (particularly American) efforts to help them which usually fail spectacularly because the people running the scheme do not, and do not want to, understand how Indian society works. The attitude is seen as, "You will all be much better off if you stop behaving like Indians and start behaving like westerners."

Greenpeace has not helped itself by deciding, with the characteristic high-handed arrogance of the left, to attack one of India’s top export industries: tea.

Last year the environmentalists published a report titled "Trouble Brewing On Indian Tea" which alleged that Indian tea was laden with hazardous pesticides and suggesting it was not fit for export to the Europe, Britain and the USA.

Given that tea is India’s second largest employer – with 3,500,000 workers employed in over 1,500 tea estates – this headline - grabbing exercise was bound to go down like a lead zepplin Indian people, especially in tea growing areas.

And then, as stated at the top of the article, it is a good way to draw a line in the sand ahead of the climate change conference, because if Indian tea is off limits for western political activists, Indian steel and Indian textiles are going to be as sacrosanct as the holiest Hindu Temple.