We learn from the news feeds that Vladimir Putin has ordered an advanced anti-aircraft missile defense system to be deployed in Syria. The S-400 Air Defense System, known to NATO as SA-21 'Growler', has arrived at at the Latakia Airbase, the Russian military operations HQ on Syria's coast.

With a range capable of taking down jets as far away as Tel Aviv and at altitudes of up to 90,000 feet, if launched from the heavily-defended airbase, the missile system is effective within an area covering most of Syria, southern Turkey, Cyprus, the eastern Mediterranean and much of Israel.

The Russian military released photographs of the advanced missile system, which is understood to have a maximum range of 250 miles is capable of bringing down high flying warplanes which operate at more than twice the height of a cruising passenger airliner.

According to Russia news website Sputnik News, the S400 is the most advanced weapon of its type in existence and easily outguns anything in the USA / NATO arsenal. 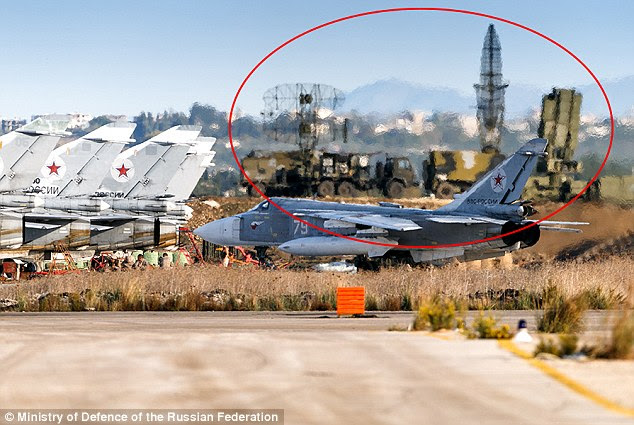 'Growler missile systems (ringed) at Latakia Airbase, Syria (Image source)
Meanwhile US Secretary of State John Kerry said that prospects of progress towards a peace deal for Syria are unlikelt to be advanced at this weekend’s Syria peace talks. But he says the diplomatic effort to end the war cannot be abandoned. Kerry said that at the present time the elements necessary to forge peace may not exist, but "time and turbulence" can create new opportunities. However, he acknowledged that participants had to bridge vast differences to succeed, saying those involved are not on "the threshold of an agreement".

According to a leaked version of the latest draft Russian proposal, Moscow wants ally Assad to stay in office during an 18-month transitional period. For Washington and its Western and Arab allies, this is impossible.

"Asking the opposition to trust Assad or to accept Assad’s leadership is simply not a reasonable request. It’s literally a nonstarter,” Kerry warned. “On this point, I acknowledge that we are still working through with Russia and Iran the question of Assad and his role, this has not been settled."

Meanwhile, Russia accused the United States of trying to hijack advance negotiations for the weekend meeting. The charge was denied by U.S. officials. The dispute focused on U.S.A's assuming it would take the lead role in the talks, and was significant in reflecting the tensions between the two main players whose diplomatic muscle is key to hopes of progress. The intervention of US Senate' hawk Lindsay Graham who, as we reported earlier, has said the USA should shot down Russian aircraft that are attacking US military assets (US backed terrorists) in Syria probably did not help.

Kerry is due to join Russian Foreign Minister Sergey Lavrov and counterparts from other nations that include adversaries Iran and Saudi Arabia on Saturday (14 November, 2015).

Barack Obama, reprising his role as 'The Invisible Man' of world politics (he's probably on holiday again, it must be all of a week since his last vacation) seems to have lost interest in the Syria problem, as he alwys does when things are not going his way.

Truth Leaked: US Senator Admists USA and ISIS Are Allies In Mid East

We are not the only blog or alternative news site that has been reporting throughout the year that rather than being an enemy of he USA, ISIS is its ally, a fighting force organized and trained by US agents to fight Obama's proxy war on behalf of his Wahabi Muslim allies against the regime of Syrian President Bashar al Assad. (Right: Linday Graham (Image source)

In fact several prominent figures in Washington have admitted it. The latest of these is South Carolina Senator Lindsey Graham, an avowed hawk who supports any US war, anywhere (well war is very good for business), says he would shoot down Russian planes in Syrian airspace in order to protect U.S. backed rebel forces in the region.

“First thing I would do is tell Putin that, if you bomb the people that we train in Syria, I shoot your plane’s down,” the Republican presidential candidate said on AM970 The AnswerTuesday morning, before slamming President Obama for letting the Russian military bomb targets on behalf of Syrian President Bashar al-Assad.

“I would tell him, Putin, you’re not going to attack the people we train. I would arm the Ukrainians so they could fight back for their own freedom. I would export natural gas to Europe to undercut his monopoly and I would tell him that Assad’s going to go. We’re gonna deal with ISIL first.”

“I would put Putin on notice that you’re not going to destabilize countries with military intervention,” Graham said.

“I would shoot his planes down, I would literally shoot his planes down if he attacked the people we trained because we have to do that. It is not right by the American president to entice people to come to a fight, train and equip them, side with them on their cause, and sit back and watch them being slaughtered by an adversary of their people and adversary of the United States.”

Clearly Graham has not heard the comments made by a senior military officer on the topic of armed confrontation with Russia. The General said American forces would by anihilated by Russia's superior military technology. And that's just Russia, if the Chinese joined in as they certainly would, the USA and most of Western Europe would not exist in any meaningful sense of the term.

The idea that ISIS has very close links with the USA has gone beyond conspiracy theory, or anti US propaganda, the proof is out there. We have previously reported on the US government's links to ISIS and revealed the vital role of NATO member Turkey in supporting the terrorists in their campaign which aims to create an Islamic Caliphate stretching from the Mediterranean Sea to the Persian Gulf

Turkey Supplying IsIS With Weapons
ISIS fighters training in turkey
Obams thinks he brough peace to Syria
Is ISIS a creation of the US CIA?
ISIS and Turkey link part of NWO plan?
Latest Posts