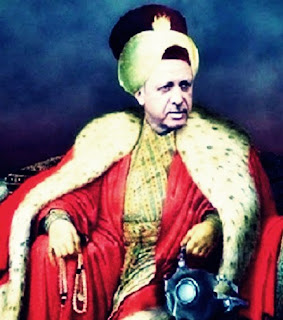 The new Turkish Sultan, Erdogan The Magnificent (Original artwork: Brother Bastion)
For all Hausfrau - Volksfurher Merkel's sucking up to Turkey's gangster President, Recep Tayyip Erdogan, was wasted effort. The crook who in collaboration with the USA and Brussels caused the deaths of thousands and displaced upwards of a million people according to conservative estimates by helping fund ISIS (and making himself a very rich man in the process) by illegally trading stolen crude oil of behalf of the terrorists, who has facilitated the illegal entry of terrorists and economic migrants into the EU by neglecting to control his country's borders, who has illegally made war on the Kurds, using the conflict with ISIS in Syria and Iraq as a diversion, and who has blackmailed EU leaders for several billion Euros in return for help (which has not been forthcoming) in controlling the flow of migrants is now threatening to increase the migrant flow if the EU does not yield to his latest demands.

One of the main stumbling blocks for EU bureaucrats like Jean - Claude Juncker, Martin Schulz and Donald Tusk, and national leaders including David Cameron, Angela Merkel and Francois Hollande, all of whom are desperate to get Turkey into the EU no matter what the consequences may be for citizens of existing member stateshas been Erdogan's refusal to countenance the EU’s demand for Turkey to change its current terrorism laws. Many Europeans feel Turkey is planning to escalate conflict with Turkey’s Kurdish minority and use that as an excuse to pursue Erdogan's territorial ambitions in Kurdish territory in Syria and Iraq. Turkey's terror laws also allow the persecution of journalists and academics even if there are no terrorist related allegations. The Committee on Civil Liberties and Justice in the EU Parliament has been requested by the EU Commission to provide rapid advice on the subject.

One of Merkl's biggest mistakes was to forget that she speaks only for Germany and not for all EU nations when she promised visa free travel within the EU's Schengen Zone. Making such a promise was way beyond her pay grade as was her pledge to Erdogan to fast track full EU membership for the human rights abusing, terrorist supporting, Islamist, Turkish regime. In fact, when those promises were made several European states which a hundred years ago existed under the brutal rule of The Ottoman Empire said unequivocally that they will veto attempts to get Turkey into the EU.

In response to that impasse Turkish President Erdogan, like the gangster and blackmailer he is, has once again threatened that migrants will resume crossing into Europe if his visa-free travel demands are not met. It has been a turbulent week in Turkey after the resignation under duress of Prime Minister Ahmet Davutoglu, and the continued centralisation of power of power in the hands of Erdogan and members of his family. Disaffection with Erdogants increasingly despotic ways may be putting his regime, Turkey's political stability and the migrant deal between the European Union (EU) and Turkey in danger.

While this is not the first time that the Turkish president has threatened to scrap the deal, the determination to resist Erdogan's blackmail and keep this terrorist state out of the EU among many member states, plus Turkey's refusal to implement human rights reforms are putting a June deadline for visa-free travel in jeopardy.

Burhan Kuzu, a deputy in Mr Erdogan’s AKP party, has warned European leaders that they should consider their decisions carefully, posting this threat online:, "when they pick the wrong decision, we will release the refugees," Germany's N-TV reports.

The EU has always made its position absolutely clear, visa-free travel could only happen if 72 conditions were met by the Turks, which the former Turkish Prime Minister had agreed to. Now that the Prime Minister is gone the Erdogan crony who replaced him immediately warned EU leaders that Turkey will do what it wants to do and if the EU does not comply with Turkish demands there will be consequences. Meanwhile Turkey is moving towards a referendum that will potentially merge the powers of the offices of President and Prime Minister, another factor which the future of the deal seems ever more uncertain.


While the migrant deal has stemmed the flow of much of the migrants from Turkey into Greece, various European leaders are not keeping their hopes up about the longevity of the deal due to the demands made by Ankara.

Scepticism about the EU / Turkey deal existed among conservative and libertarian thinkers from the outset, now as it becomes clear how much the EU surrendered to Turkey and how Turkey has not intention of honouring the paltry pledges it made, the left are becoming sceptical as well.
Migrant crisis: Cyprus threat to EU-Turkey deal - BBC News
After The Brexit The Frexit;1 in 3 French Voters Want Out Of The EU
EU Membership Vote in UK to Paralyze Decision Making
EU Membership for Turkey Impossible in Next 10 Years – EU Commission Head
EU-Turkey migrant deal an illusion, says Hungarian Prime Minister