Forget Climate Science, We Need A Green Revolution That Starts At The Grassroots, Not Government 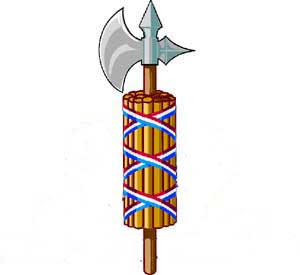 Fasces: An axe with a bundle of sticks bound around the shaft, it symbolised the unbreakable power of the central authority in the Roman Empire.

For three centuries the nations of Europe, and their offspring on the American and Australian continents have stampeded towards material affluence and constant economic growth ruthlessly exploiting the planet's resources regardless of the effects on the envioronment or societies whose development was low - tech across the globe, the people in these societies were subjugated, slaughtered or sidelined to subsist as best they could while the great eonomic powers trampled on their land and way of life.

In turn it was Rome, Byzantium, France, Portugal, Spain, Britain and now Washington as the dominant economic power that sought to establish hegemony and destroy any rivals. In the case of the latter the rivals, Russia and China seem to be gaining the upper hand. While Washington It alone believes as if it has a right to be the sole beneficiary of this resource eating frenzy (American exceptionalism) Russia and China have been quietly buying influence in Africa, Asia and South America without pissing off the locals too much.

It has been estimated that if every nation matched US levels of material consumption we would need over 4 earths to sustain us. US citizens constitute 5 percent of the world’s population but account for 24 percent of global energy usage. Now consider the consequences of a US-style model of ‘development’ rolled out across the world. It would be unsustainable for the planet to have a dozen ‘Americas'. The global economy is based on a belief in the feasibility of infinite GDP growth being sold to the world via the neoliberal or neocon globalisation agenda promoted by the G20 group of nations, the United Nations, European Union, World bank and IMF It is a cynical deception and has already led us to the brink of east - west war and regional proxy wars that have caused environmental devastation, poverty, homelessness and a humanitarian crisis.

This snippet from an article published in 2001 shows how western interference in third world societies and economies destroys the very people advocates of globalism claim it will help.


“The “economic therapy” imposed under IMF-World Bank jurisdiction is in large part responsible for triggering famine and social devastation in Ethiopia and the rest of sub-Saharan Africa, wreaking the peasant economy and impoverishing millions of people. With the complicity of branches of the US government, it has also opened the door for the appropriation of traditional seeds and landraces by US biotech corporations, which behind the scenes have been peddling the adoption of their own genetically modified seeds under the disguise of emergency aid and famine relief.

Moreover, under WTO rules, the agri-biotech conglomerates can manipulate market forces to their advantage as well as exact royalties from farmers. The WTO provides legitimacy to the food giants to dismantle State programmes including emergency grain stocks, seed banks, extension services and agricultural credit, etc.), plunder peasant economies and trigger the outbreak of periodic famines.”

The USA has only been able to consume at such excessive levels for the past five decades because the US dollar serves as the world reserve currency, which means high demand for it is guaranteed as most international trade (especially oil - the petrodollar) has been carried out using the dollar. US global hegemony depends on it maintaining the dollar’s leading role but recently China has been challenging this.

As long as it holds the reserve currency Washington is able to run a huge balance of payments deficit by using its debt (treasury bonds denominated in dollars) as security on it borrowings, then use the petro-dollar to dictate the prices it will pay for its imports. Through this debt imperialism Washington has been able to hitch a free ride courtesy of the rest of the world. All that is changing however.

While we ordinary punters are distracted with sex scandals at home and terrorists rampaging through the middle east and Africa, the US / EU / NATO confrontation with Russia / China / Iran this blog has been reporting in Currency Wars is getting into a very dangerous state. While the Chinese and Russian led move to dump the US dollar as global reserve currency is causing economic chaos, the USA attempts to provoke armed conflict with Russia are getting more reckless and desperate.

To avoid destruction of our way of life 9because the leaders of Russiand and China don't care what hapens to us, to save our civilisation, we must reject scams that aim to hamstring our businesses with punitive carbon taxes and start a grassroots green revolution. Consume less, don't be part of the throwaway society, don't scrap good stuff that is still doing the job, because it is not the latest model. Everything has an environmental impact. Use less. Live smaller.

The Moskva (‘Moscow’) missile cruiser now standing off the Syrian coast. (image source)
The Kremlin has hinted it will halt military cooperation with Turkey after a Russian warplane flying a mission against ISIS and Free Syrian Army (FSA) targets in Syria was shot down by Turkish air force pilots. Russian General Staff representatives said on Tuesday that measures to strengthen security around the Russian air base in Syria will be taken.

Sergey Rudskoy, of the Russian General Staff, condemned the attack on the Russian plane, which evidence suggest did not violate Turkey's airspace, by Turkish fighter jets as “a severe violation of international law”. He stressed that the Su-24 was downed over the Syrian territory, four kilometers away from the Turkish border, he said.

Additionally, according to the Hmeymim airfield radar, it was the Turkish fighter jet that actually entered Syrian airspace to attack the Russian aircraft.

The Turkish fighter jet made no attempts to contact Russian pilots before attacking the bomber, Rudskoy added.

“We assume the strike was carried out with a close range missile with an infra-red seeker,” Rudskoy said. “The Turkish jet made no attempts to communicate or establish visual contact with our crew that our equipment would have registered. The Su-24 was hit by a missile over Syria’s territory.”

Vladimir Putin was said to be furious about the attack and the follow up which saw Syrian guerillas fighting against Assad bring down a Russian rescue helicopter with an anti tank missile supplied by the USA. Shortly after Putin warned there would be serious consequences following the attack, Russian guided missile cruiser Moskva, equipped with the ‘Fort’ air defense system, similar to the S-300, was order to a position off Latakia province's coast.

"We warn that every target posing a potential threat will be destroyed,” lieutenant general Sergey Rudskoy said during the press briefing on the move.

from Russia Today
The Moskva (‘Moscow’) missile cruiser is a flagship vessel of the Russian Black Sea fleet and is one of the fleet’s two biggest ships. The cruiser was stationed in Sevastopol but left in summer 2015 after being deployed to the Mediterranean Sea where it joined Russia’s standing naval force in the Mediterranean.

Since September 30, the Moskva cruiser acts as a covering force for the Russian air forces in Syria while deployed in the eastern Mediterranean.