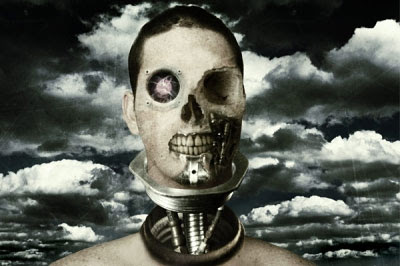 A vision of transhumanism (source: redicecreations)

Are you ready to surrender your humanity to science, accept having computer chips implanted in your skull that will link your brain to the internet (via a Google server) and let your life be controlled by machines? That's what The Controllers are planning for you. Think of it, no taking a sick day off work and going to the beach or woods, no eating too much ice cream, no hooking ip with a totally inappropriate person for casual sex, or breaking speed limits just for fun. If you think being an automaton would be kool, think again ...

Transhumanism: The Elite's Agenda For Total Control
Robot lovers, indestrictible soldiers with no mercy or compassion, everlasting life for beings that are part human, part machine, genetically modified humans with supernatural strength and endurance competing in future 'hungrer Games' style Olympic tournaments: the plot of some dystopian novel? No, actual items in the elite's agenda for total control.

Why are scientists demaning human rights for non human robots
Human rights for robots? That's the craziest thing I ever heard, you might well be saying. but those unfailingly loony and dysfunctional fuckwits in the science academe are so convinced they can build machines (robots) with human attibutes they are demanding equal rights for animated tin cans. This over - the - top rant pusts a few things in perspective.

Transhumanism and Eugenics
We have said many times that the science community is at war with humanity. Scientists are out of control, evry day we hear of some new scheme to try to control nature, be it human nature or the climate. Given what we ought to have learned from all previous attempts to control nature we can only conclude that scientists are insane psychos willing to risk destroying life to show off how clever they are.


Transhumanism: Join The Resistance
Transhumanism, the creation of - or turning us into - part human, part machine cyborgs is generating a lot of discussion and a lot of spontaneous ejaculations in the scientific community as they contemplate having their brains replaced by a computer. There are no limits on the ambitions of scientists fantasies, they even envisage creating robots that can interbreed with us, but how much is realistic?


Transhumanism: They will get under your skin
We seem to be talking a lot about transhumanism, the process of turing us into human - animal or human -machine hybrids recently. The Daily Stirer thinks such technological visions are nothing more than the fantasies of sick minds, but politicians and corporate leaders, ever eager for more power and control, seem willing to stump up infintie funding.

Cellular Technology: Can Governments Use It To Rearrange Your Brain


Happily Ever After, You and Your Robot Fuck Buddy
It's one of those really bad ideas that scientists just can't seem to let go of (well male scientists that is). Just as they are covinced in a five years we will have computers that think like humans (although 50 years since it was first said, we are no nearer to that goal) so they like to insist every few years that in a few years we will all have meaningful relationships with robot fuck buddies

Slaves To The Machine
Some say technology is the new magic and are willing to believe every new gadget launched improves beyond recognition the lives of those who own one. Others say we are becoming slaves to our machines and losing the ability to think for ourselves as well as our social lives and cultural bonds.

It’s not just smart TVs. Your home is full of gadgets that spy on you
Smart television sets connect to the internet and it is both way data exchange. This blatant invasion of privacy is sold by claiming that on your spoken command your set can download programmes and films from content providers such as Netflix or catchup services BBC iPlayer. What the makers and network operators are not saying is that if the internet can be used to bring information into your TV, it can also be used to take it out.