American Intelligence Services like to brand Russia, China, Iran or North Korea as the greatest threat to world peace, according to whichever new conflict they are trying to sell to the American public. This thirst in Washington and the boardrooms of defence contractors for endless war is actually the greatest threat to world peace, stability and security.

Russia fears a possible preemptive US nuclear attack on its territory. China and Iran resent constant American meddling in the politics of their regions and North Korea are just a bunch of crazy parnoiacs who pose no real threat to anybody except themselves. 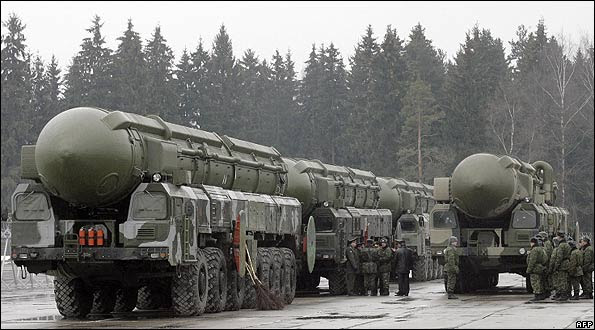 ICBMs on mobile launchers, before you can neutralise them you have to find them (picture: bbc)
According to Russia’s General Staff deputy head of operations Gen. Viktor Poznikhir,


“(t)he presence of American ABM sites in Europe and ABM-capable ships in the seas and oceans close to Russia’s territory creates a powerful clandestine potential for delivering a surprise nuclear missile strike against Russia.”

“The presence of the global ABM system lowers the threshold for the use of nuclear weapons, because it gives the US the illusion of impunity for using strategic offensive weapons from under the protection of the ABM ‘umbrella.’”

“The ABM shield is a symbol of the build-up of rocket forces in the world and a trigger for a new arms race.”
Since the Western-instigated Cold War began in the late 1940s, Washington and Pentagon defence 'experts' have believed Such insanity persists in Washington, and it is this plus the beliefs in American exceptionalism and US technological supremacy global security, threatening humanity more than ever with neocons at the Defence Department, The Pentagon and in the security agencies having closed ranks against President Trump and hamstrung all his early foreign policy initiatives to ensure business as usual under the new administration.

Intense hostility toward Russia in Washington erases the chances of sanity prevailing in regard to nuclear weapons and increases the unthinkable – mass annihilation from possible nuclear war.

America and Israel earned that dubious distinction long ago – threatening the region and world peace. Perhaps what Votel meant was that Iran is the biggest obstacle to America imposing puppet regimes throughout the middle east and using them to undermine Russia's security. Which is precisely what Obama tried to did by supporting ISIS and stating the US priority in the Syrian war was not to defeat the ISIS terrorists but to depose Assad.