Since the Russian 'invasion' in late February, Ukraine has pushed COVID into second place in terms of the  level of coverage given by both the mainstream and alternative media. The difference is that while there has beeen some diversity in alternative media reporting, mainstream media have stuck faithfully to the official propaganda narrative of Russia bad, Ukraine good. WUkrar propaganda follows a well established patters and as the graphic shows, the Ukraine / Russia propaganda is a copy book example: 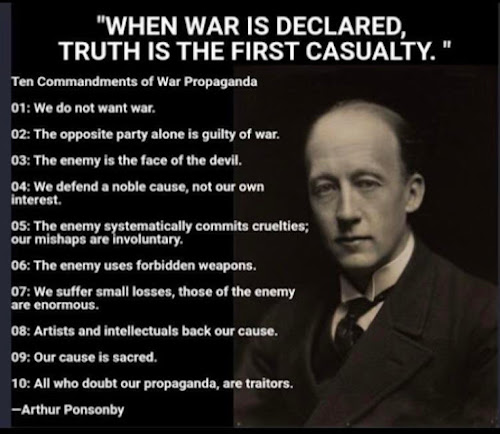 Conspiracy Theories abound over the true situation inside Ukraine, the true reason behind the invasion and the a mctualotives and goals of Russian President and surrogate Bond villain Vladimir Putin.

Among the crackpot opinions and fake news however, a theory that has some credibility posits that Putin is some kind of saviour, and that his moves in Ukraine represent an attack against the Western, globalist elite and NATO / US expansionism.

In fact, on the available evidence it is becoming more apparent that the goal of the western alliance in provoking and escalating this conflict (by arming Ukraine's military withy high tech weapons,) is to achieve regime change in moscow as they did in Kiev back in 2014.

Recently, Victoria Nuland, the US Under Secretary of State for Political Affairs, admitted that Ukraine houses US government funded and controlled “biological research facilities” and expressed concern that Russia would commandeer them.

Anyone else think this story seems similar to the whole Covid lab-leak hypothesis?

In both cases, the theories have followed a similar life-cycle:

Moscow’s actions in Ukraine and the western alliance's anti - Russia propaganda  have exposed a deep-seated latent racism toward the Russian people that a number of Western institutions – not least Hollywood and the legacy media – have been cultivating for far too long. Demonization of Putin is one thing, demonization of the Russian people is another, and a racist thing at that.

Of all the major military interventions by the western alliance (chiefly USA, UK and France - the FUKUS axis,) undertaken since the turn of the century, Afghanistan, Iraq, Libya, and Yemen, to name but some of the broken places left behind after the axis had taken it upon themselves to spread democracy and western values around the world, it is strange that Russia’s “special operation” in Ukraine stands apart for a very peculiar reason, and that is the ugly, irrational hatred of Russia and its people generated by mainstream media coverage of the conflict.

Stories circulating online tell of Russians enduring discrimination in Western capitals – from famed conductor Valery Gergiev losing his job at the Munich Philharmonic, to children of Russian families living abroad being bullied in school or Russian nationals being denied service in cafés and restaurants.

Even  the medical professions are joininh in with the the lunacy. Last week, the Iatros Clinic in Munich, Germany, announced it would no longer treat Russians and Belarusians. Only after experiencing a wave of online criticism, proving that not everyone has lost their mind, did the facility retract its hysterical decision.

Equally astonishing has been the West’s brutal sanctions regime, which is so vicious, ill - considered and over the top that it could actually succeed in inflicting greater economic pain even on Westerners and the people of third world nations. Responses to the events in Ukraine have, like the responses to the similarly overhyped COVID pandemic, are pure virtue-signaling  on speed, supported by a narrative designed (by behavioural scientists,) to work on the emotions of the general population rather than evoking a rational and balanced response. This is particularly worrying given the mob seems incapable of differentiating between the actions of the Russian government and those of its citizens, who, as is the case with every country finding itself in such circumstances, have precious little say in matters related to war and peace. It is a similar emotional effect as that which drove the hatred of the unvaccinated by those who had accepted having their DNA modified by the clotshot during the pandemic.

And while it is rational to loathe war, and to speak out against it, a little consistency from the consituency currently cheerleading for escalation to nuclear conflict between NATO and Russia plus its allies. Call me a controversialist if you like but I can't help wondering why have the FUKUS axis powersd and their allies never suffered such opprobrium over their illicit military adventures across the Middle East and North Africa?

Ukraine - a lesson on its recent history

The winner of the November 2004 vote, Viktor Yanukovych, was portrayed as being pro-Russian, so Western governments refused to recognize his victory and declared electoral fraud.

Western-backed forces in Ukraine then mobilized and carried out a textbook color revolution, called the “Orange Revolution.” They forced another run-off vote that December, in which their candidate Yushchenko was declared president.

In a shockingly honest 2004 report titled “US campaign behind the turmoil in Kiev,” Britain’s establishment newspaper The Guardian admitted that the “Orange Revolution” was “an American creation, a sophisticated and brilliantly conceived exercise in western branding and mass marketing,” bankrolled with at least $14 million.

“Funded and organised by the US government, deploying US consultancies, pollsters, diplomats, the two big American parties and US non-government organisations, the campaign” attempted to topple governments “in four countries in four years,” The Guardian boasted, targeting Serbia, Georgia, Belarus, and Ukraine.