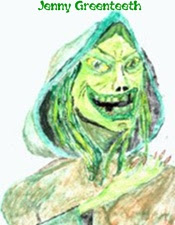 My choice of name for a new multi media web project has caused some amusement among American friends. "Why are you building a web site dedicated to the shortcomings of British dentistry," they ask. The first time I noticed this particular vein of American humour was during the run up to the recent Presidential election. A U.K. newspaper and a U>S> media group arranged an e-mail tie up to get some interaction between Brits and Americans on issues of mutual concern; Iraq, Globalisation, the environment etc. While the British expressed dismay at the prospect of another Bush victory the Americans involved, mostly from industrial communities in the mid - west assailed us with advice about how we should stop trying to interfere in American politics and instead concentrate on getting our "lousy teeth" fixed.

The lousy teeth jokes don't work of course; they're not funny and not true. And in case anyone is tempted to attack the lovely Miss Greenteeth (above) we should warn you people who venture too close to her algae encrusted gnashers are seldom ever seen again (you'll have to look up the legend to understand that)

The Kelpi by herbert James Draper, depicting Jenny Greenteeth when she was a pre - Christian Nymph who lured lusty knights to a watery death
The obvious knee - jerk response to "lousy British teeth" is to first as the taunter if they re just angry because they did not qualify for a part in Deliverance, and then retort "we will get our teeth fixed when you guys get your fat arses fixed so you don't have to complain about doors in British Hotels being too narrow".

A slightly more reasoned response would be to point out that Austin Powers is a movie and Homer Simpson is a cartoon character. Name calling and insult hurling is good fun of course and now that such activities have been ousted from domestic politics it is nice to see them flourishing in the international arena. The simple minded do tend to take it literally however and are soon on the slippery slope towards more addictive forms of racism and xenophobia.

So what about British teeth. Well in Europe generally we have not yet succumbed to the ideal of outward physical perfection. If they ain't broke don't fix it is our attitude, especially to noses and in Britain particularly the perfect, even smile is viewed with some suspicion for very good reasons. Thanks to our nation's pioneering the concept of state funded health care the brilliant white, even toothed smile, so essential in the U.S.A for anybody planning to leave the house, here became a sexual turn - off.

The Osmond grin possessed by far more Britons than Americans in the 1950 and 60s was not an indicator of our concern for dental health but the result of obsessive bureaucratic meddling in our lives. At the first sign of a cavity in a fully grown adult dentists would be paid by the state to pull out entire sets of perfectly good gnashers with years of chomping left in them.

Doubting twenty - one year olds who complained through bloody gums "mutt I yiked my deeth" were told by representatives of the nanny state. "It is for the best, you will get a free set of dentures and will have no more trouble for the rest of your life," Those old fashioned removable false teeth gave lots of trouble of course, they were painful and had a terrible habit of slipping out just when the owner was trying to impress somebody. And kissing with tongues was a very high risk adventure.

So here you have the explanation of why us Brits are so attached to our crooked, uneven, slightly off - white smiles. These imperfections show that we have the teeth we were programmed to grow from the moment of conception, which is a great comfort to prospective sexual partners. You see when one has been charmed by a perfect smile and managed to get lucky with the person behind it, there is nothing more horrific than to awake the following morning and see that same smile grinning out from a glass of water at the bedside.

NOTE: Ian wishes it to be known that at age fifty six he still has all his teeth (except for the one he broke biting the cap off a beer bottle years ago) and that they are not the chalky white of soft teeth that will crumble if they are shown sugar, but the waxy white of teeth that will still be around if he lives another fifty six years.

TAKING A BREAK, NOW I HAVE SOME CONTENT ENTERED ITS TIME TO START PROMOTING THIS BLOG. I WILL BE BACK BEFORE THE END OF THE WEEK (I wasn't back for eight years as things worked out).