Goodbye To The Biggest Threat To World Peace Since Genghis Khan


While 'liberals'  ( i.e sycophants and fans of corporate capitalism and perpetual war) in the USA wail and gnash their teeth over the end of the Obama era and the succession of Donald Trump to the US  Presidency, and while the totally discredited mainstream media tries to peddle the lie that the whole world is in shock at the thought that the greatest president ever (and the greatest human being that ever lived according to some) will no longer be giuding the world to a golden future of corporate fascism, globalist tyranny and Gay BLT ascendency, the reality is that a majority of Americans who understand there are more important issues than Gay BLT rights will be joined by the rest of the world in celebrating the departure of Barack Hussein Obama from The White House and the international stage. 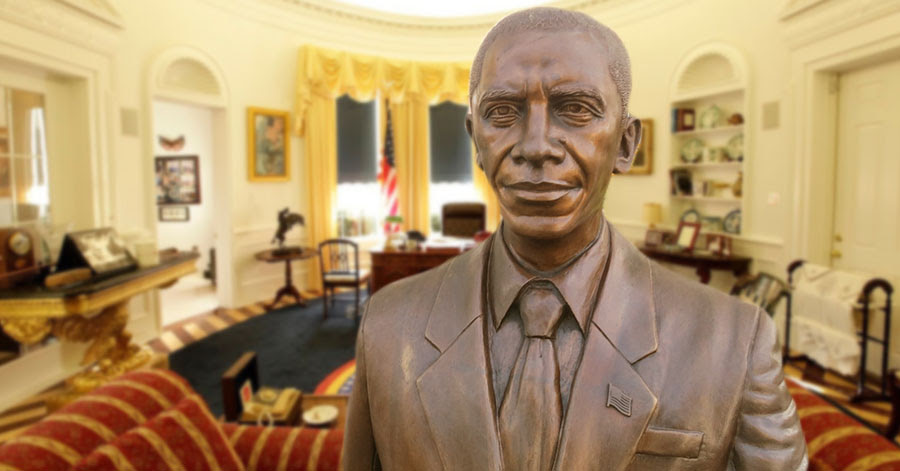 There's a story doing the rounds that Obama has ordered a life sized statue of himself to be placed in the lobby of The White House to remind visitors what a great leader he has been. It's probably a hoax, but the vanity Obama has shown over the years make it believable.
Obama may babble his own praises in media interviews, but by talking of what his legacy will be he only underlines the vanity, arrogance, narcissism and  infantile self obsession that have defined him as a president and as a man. When George W Bush, on leaving The White House, was asked what his legacy would be, that much maligned person showed more class in one sentence that Obama and his 'liberal' fan club could ever muster in eight long years by replying that he would leave the question to be answered by history.

This blog does not need to remind Americans of the economic and social catastrophe's caused by Obama's domestic policies. Internationally the Obama years brought failure to either prosecute the wars in Iraq and Afghanistan successfully or withdraw without loss of face. Other foreign policy triumphs for the Obama administration were The Arab Spring, Benghazi, ISIS, civil war in Syria, civil war in Ukraine and the Iran nuclear deal and US military engagement in 70 nations around the world. The so called 'free trade' deals, TPP and TTIP, Obama's flagship foreign initiatives which were really not free trade deals but an attempt to steal national sovereignty from trading partners of the USA and give global corporations the ability to override national law, both failed embarrassingly.   And right at the end of his presidency, Barack Obama has committed the greatest betrayal of Israel in U.S. history and has brought us dangerously close to war with Russia.

It is not just the consistency in his track record of failure that truly damn Obama, but his arrogance and unshakeable belief that his tragedies are triumps and his failures are achievements. There was that unforgettable moment late in 2015 when after Russian and Iranianintervention had broken Islamic State power in eastern and northern Syria and put the terrorists on the backfoot after US efforts had for three years proved totally ineffectual, Obama still felt justified in praising himself for having delivered peace and stability to Syria in 2015.

Obama and his cronies and supporters are in a great deal of distress that much of the hard work towards advancing gay rights, legitimizing illegal immigrants and undermining the police and the rle of law particularly in black areas of cities  over the past eight years is about to be undone by Donald Trump.  On Wednesday, The Obama Administration's serial child molester and Creepy VeePee, Senator  'Crazy Joe Biden' Joe Biden warned the elitists gathered at the World Economic Forum in Davos that their “liberal world order” is in danger of collapsing…

The gist of his speech was simple: At a time of “uncertainty” we must double down on the values that made Western democracies great, and not allow the “liberal world order” to be torn apart by destructive forces.


And without a doubt, we definitely want it to collapse.

During his time in the White House, Barack Obama has used the full diplomatic power of the government to promote “abortion rights”, “gay rights” and other “liberal values” to the farthest corners of the globe.  At home, the appointment of two new and stridently left wing  Supreme Court justices politicised that august body and paved the way for a Supreme Court decision that forced all 50 states to recognize gay marriage.  During his final press conference on Wednesday, Barack Obama told the media that he was particularly proud of this although it had been one of the most divisive political acts ever and actually turned black Christians, who had previously been solidly behind Obama, against the Democrats.

Somehow America has survived as a nation in spite of Obama eight years of trying to prepare citizens for a handover of sovereignty to a world government, but without a doubt a massive amount of damage has been done. Has the USA been so deeply and bitterly divided it will prove ungovernable? Will the world capital of crazy, California, secede and give all those spaced out dopehead, smackhead and acid head hippys a chance to sample the realities of world politics?

Many are hoping that Donald Trump will be able to start repairing that damage and will work hard to set the USA and the democratic world on a positive course once again.

It still doesn’t seem quite real to me that Donald Trump will soon be residing in the White House. And people who are expecting miracles under Trump are likely to be disappointed as those who expected the world to fall in behand Obama's hippy - dippy, all - join - hand - and - sing - Kumbaya brand of policymaking, but it will be nice to have a man who has run real businesses in the Oval Office instead of a girlie - man who, were his CV uncharacteristically honest, would list ice cream slinger, male prostitute, community organiser (whatever that means) and holder of several sinecures in academic institutions as his previous experience.


The Left In Meltdown

As the UK Labour Party crumbles into complete disarray with it’s leader, the sixty – eight year old perpetual student protestor Jeremy Corbyn proving a more divisive figure than any of his predecessors, as he sacrifices more and more votes on the altar of fashionable causes, and the EU, natural successor to Hitler’s European unification project falls apart in the face of resurgent cultural nationalism, it is quite satisfying to see ...