A VERY strong earthquake initially reported as 6.8 on the Richter scale though that was later amended to 6.5) occurred in the Pacific Ocean off the coast of Calfornia earlier today. The quake, in the "Cascadia Subduction Zone" 100 miles west of Ferndale. According to seismologists monitoring the area this is where "the big one" that will send a lot of high value property sliding into the water around San Francisco, will begin if it happens, and a 6.5 quake could be a signal that there's more to come! 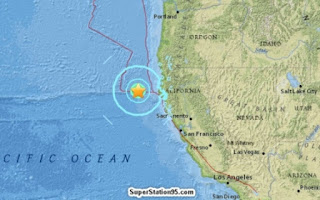 Quake zone, California
According to the US Geological Survey, the quake struck at 9:50 AM eastern US time (0650 local time) at a very shallow depth of only 12 km. In 2015, a group studying the region released a study of the potential damage of such a quake hitting now.

Initially a Tsunami concern existed but the Pacific Tsunami Warning Center has reported NO TSUNAMI from this earthquake. (Report below)

There is grave danger that today's quake may be a "foreshock" and that it signals the coming of a much stronger, horrific, earthquake, within the next few days. Such a catastrophic quake can now be triggered in the Cascadia subduction zone because today's quake has destabilized the region. People on the US west coast are URGED to prepare for such a potential emergency by storing food, water, batteries for flashlights and radios, fueling up their cars in case evacuation is necessary More >>>

Later reports from the area, of a second, weaker quake hitting the same area, are as yet light on detail. The second earthquake struck along the exact same fault line as the 6.5 magnitude shaker The second quake, a smaller magnitude 4.7, stuck at a shallow depth of only 3.7 km and did so west of the initial M6.5, which means the instability is traveling west . . .toward the major Cascadia Subduction Zone main fault!!!! The map below shows the second earthquake at 11:30 AM eastern US time.

Hours after reports of a magnitude 6.5 earthquake off the California coast came in, we now have reports of a larger, magnitude 8.0 earthquake near The Solomon Islands. Minutes after the earthquake struck, its intensity was lowered to still strong magnitude 7.7 shake.

Unlike the smaller earthquake that was recorded off the California coast, there are chances of large Tsunami waves with this quake. The Pacific Tsunami Warning Center has issued a tsunami warning for several islands across the Pacific Ocean. According to data from the U.S. Geological Survey, the earthquake struck at around 17:38 a.m. GMT,4:38 a.m. Friday local time. The epicenter of this quake was located around 130 miles southeast of the city of Honiara, the capital of the Solomon Islands. USGS data also revealed that the quake took place at a depth of 25 miles.

Read more at http://www.inquisitr.com/3780110/solomon-islands-earthquake-tsunami-warning-hawaii/#tkebdj1JsIMpspM2.99
Posted by Boggart Blogger at 12:46 PM No comments: