EU / Tukey Migrant Crisis Deal One Veto Away From Being Wrecked 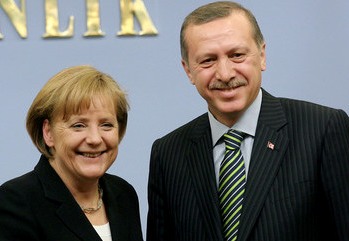 Erdogan and Merkel: Are they lovers?
The deal struck by European Union leaders (i.e. Angela Merkel acting unilaterally) with Turkey's President Recep Erdogan for the EU to pay Turkey six bilion Euros, for what is vaguely termed 'help from Turkey in dealing with the migrant crisis) is controversial for many reasons. First; of all, it is unclear how the EU will organize the process of returning refugees from Greece to Turkey and how it will allocate quotas for newcomers.

Second; one of the concessions obtained by Erdogan from Merkel is that Turkey's application for full EU membership will be fast tracked, which would open the EU's gates to 80 million Turks qualified to work as waiters, kebab stuffers, Uber cab drivers and aggresive beggars and because Turkey would have Schengen zone 'open borders' rights, and notoriously leaky borders, anyone who could cross from the lawless failed stated created by Obama's ill considered and incompetently executed interventions in middle eastern and north African nations into Turkey, could carry on the the welfare handout paradises of northern Europe.

The EU is unable to efficiently organize the allocation of refugees and resolve the current crisis a Huffington Post op - ed observed. Therefore it is unlikely that European states will prove able to implement the recent EU-Turkey deal.

Just about everybody in Europe must be aware by now that the Turkish President Recep Erdogan has been blackmailing the EU over the migrant crisis, and like any blackmailer he keeps making more demands without honouring his previous pledges. One of the concessions extracted by Erdogan from the useless German Chancellor is that The European Union has provisionally agreed to accelerate membership and visa liberalization negotiations in exchange for Ankara helping Europe in resolving the current migrant crisis.

That being the case, it looks unlikely the plan can be put into action, because one veto from any EU country is enough to block the initiative completely. Hungary, where folk memories recall the brutality of the Turks when Hungary was part of The Ottoman Empire, has already said it will veto any plan to grant Turkey full EU membership. Another opponent of the plan is Cyprus which has the support of other EU countries. Hungary will never accept the EU-Turkey plan, while Bulgaria has threatened to veto the initiative, if it does not receive more support for ensuring its border security.


"It is unlikely that any other country would so strongly resist the liberalization of the visa regime for Turks or even its accession to the EU as this small country in the Mediterranean region," a Cypriot newspaper wrote (summaraized in English by news aggregator Euronews).

After Turkey invaded Cyprus in 1974 and occupied almost 40% of its territory (the step is viewed as illegal under international law), the relations between both countries have remained more than strained for nearly four decades.

"Even now President Nicos Anastasiades warns that his country would not agree to the extension of negotiations on Turkey's accession to the EU. First, Turkey must fulfill ‘its long-standing commitment" toward Cyprus,'" the newspaper wrote, referring to the island's leader.

Scepticism about the EU / Turkey deal existed among conservative and libertarian thinkers from the outset, now as it becomes clear how much the EU surrendered to Turkey and how Turkey has not intention of honouring the paltry pledges it made, the left are becoming sceptical as well.
Migrant crisis: Cyprus threat to EU-Turkey deal - BBC News
After The Brexit The Frexit;1 in 3 French Voters Want Out Of The EU
EU Membership Vote in UK to Paralyze Decision Making
EU Membership for Turkey Impossible in Next 10 Years – EU Commission Head
EU-Turkey migrant deal an illusion, says Hungarian Prime Minister
Elsewhere: [ The Original Boggart Blog] ... Daily Stirrer ...[Little Nicky Machiavelli]... [ Ian's Authorsden Pages ]... [Scribd]...[Wikinut] ... [ Boggart Abroad] ... [ Grenteeth Bites ] ... Ian Thorpe at Flickr ] ... [ Tumblr ] ... [Ian at Minds ] ... [ Authorsden blog ] ... [Daily Stirrer News Aggregator]