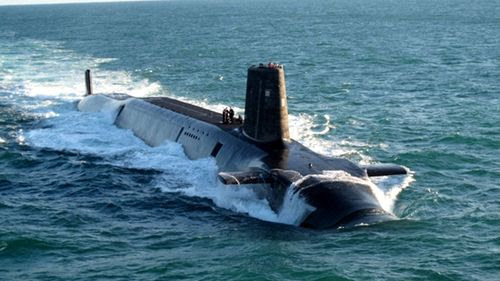 One of Britain's Trident Submarines - a bit useless against suicide bombers on the London Underground
Whatever else we may think of recently elected Labour leader Jeremy Corbyn, he has certainly livened up politics.

Last time the UK Parliament had to consider renewing the contract by which Britain agrees to pay the USA a huge sum for the privilege of being Uncle Sam's nuclear base in Europe and thus first in the firing line if anything kicks off between America and Russia, David Cameron was leader of the opposition and the traitor and war criminal Tony Blair was Prime Minister.

They cite tactics as an excuse for their yellow bellied cowardice. What tactics? If Trident had been rejected (in modern warfare, against a nutter with a rucksack full of bleach and acetone on a rush hour tube train, it would be about as much use as the proverbial chocolate teapot) Blair would have faced a vote of confidence. Which he would have won.

Had that happened Blair would truly have been a lame duck Prime Minister, his political potency castrated and his legacy in ruins he would have had to stand by and watch his party polarise as the Tories did after the fall of Thatcher.

Now that would have been tactics.

Unfortunately Boy - boobs Cameron did not have the balls. Now, we are happy to say, Jeremy Corbyn does, he will oppose Trident (for the wrong reasons but a result is a result) and with the backing on SNP MPs couls severely damage Camero's credibility, if not defeat him and force a vote of confidence in the Prime Minister on this issue.

Because of intemperate remarks allegedly made on Andrew Marr’s Sunday morning television news magazine by Gen Sir Nicholas Houghton, the chief of the defence staff (“Pacifist Jezza not fit to be PM,”) a row has erupted about whether serving army officers are allowed to have an opinion.

What Houghton had actually said to Marr and realised that the senior soldier had tiptoed, not through the tlips, but through the Trident debate more deftly than print media had reported overnight.

I don’t think Sir Nick (as we should all think of him) poses any kind of threat. He seems emollient and sensibly bland; perhaps his appointment in 2013 was a reaction to his feisty predecessor, Gen Sir David (now Lord) Richards, who was inclined to launch surface to Ivory Tower missiles at government bean counters over budget cuts or David Cameron’s cadet corps’ strategic thinking.

But don’t think this sort of trouble will now melt away, for several reasons. Like most public servants, the military is pretty cross these days about the political class, Tory as well as Labour, for asking the soldiers (mostly), sailors and aircrews to do more for less, with less pay and fewer perks too. Even on Remembrance Day, it’s fair to point out that more pensioners have met an early death because of the cuts than soldiers, but their grievance is also legitimate.

So Cameron got it in the neck from Richards over Libya, as Gordon Brown and Tony Blair once did from the pyrotechnic former SAS man Lord Guthrie.
Posted by Boggart Blogger at 10:23 AM No comments: