For a few days now we have been seeing unconfirmed reports that the Brazilian military, which strongly supports right wing leader Jair Bolsonaro, has taken action to overturn the result of the recent election which was narrowly won by far - left former President Luiz Ignatio Lula da Silva (Lula), was corrupted by extensive vote rigging by Lula's supporters. This follows news that Brazil's Supreme Court, which Lula packed with his communist supporters during his presidency, refused to authorise and investigation into strongly evidenced claims of vote switching from Bolsonaro to his Marxist opponent. It is worth noting that after being deposed from the presidency Lula served jail time for corruption. 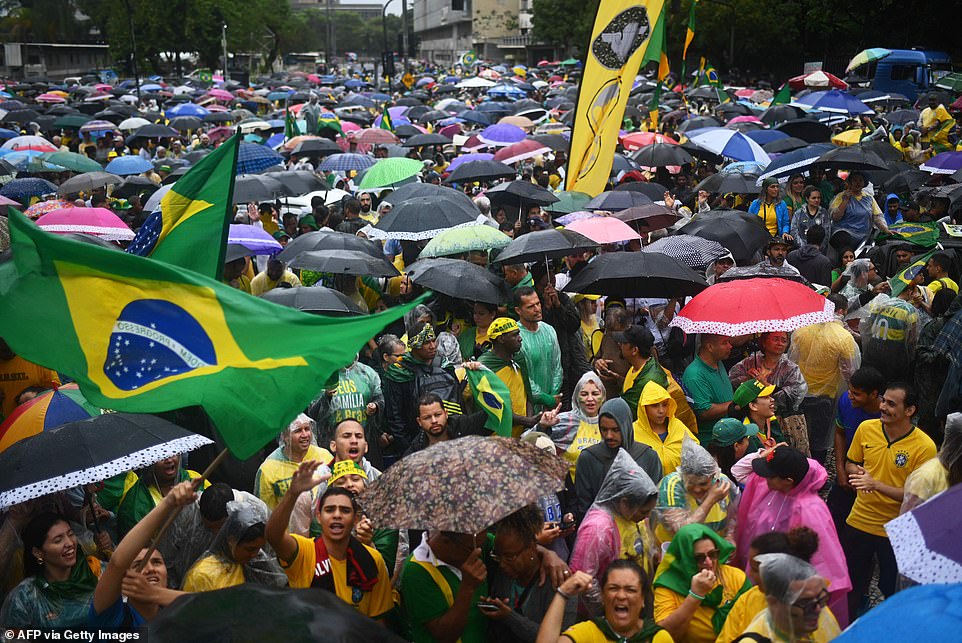 Thousands of Bolsonaro supporters take to the streets to protest against Sumpreme Court's decision to deny an investigation into alleged corruption in the recent election - Picture: Daily Mail

The pro-Bolsonaro Brazilian military has reportedly taken out top leaders of the Red Command drug cartel which had heavily supported Luiz Inácio Lula da Silva in the recent election. Analysts say this is the first step towards a federal military intervention in the country over a disputed election seeking to install Silva as Brazil’s president after a pro-Silva court refused to allow the military to audit the election results as required by law.

Globalist leaders in Europe and North Ameerica, who are quick to label centrist parties such as Germany's  AfD or France's Rassemblement National as far right, do not seem to find anything questionable about a 'left wing' politician collaborating with drug cartels, human trafficking racketeers or neo - Nazis.

It should be noted for balance that while Lula is a known criminal, Bolosnaro is no stranger to scandal, his own presidency has been tained by accusations of corruption and impropriety, though nothing has been proved.

Bolsonaro had repeatedly claimed that the electoral system was open to fraud and the use of electronic vote counting machines, the widespread use of mail in voting and obious instances of ballot harvesting certainly suggest demands for an investigation are justified. As well as echoing those claims, some Bolsonaro supporters argue Lula should not have been allowed to run after being convicted as part of a sweeping corruption scandal linked to his Workers Party, a conviction which was overturned by the notoriously corrupt Supreme Court last year.

'We need a federal intervention, we have a Supreme (Court) that sold out to the Workers Party,' said one demonstrator at a rally outside a regional military headquarters in the center of Rio de Janeiro.

“The official declaration of Article 142, which allows the military to intervene in the case of a conflict between the branches of government, is expected this week,” according to the Gateway Pundit. “Soldiers were seen joining the protestors and instructing them to remain calm when action comes.”

According to reports, Silva is heavily reliant on the organised crime network Red Command for his political support, especially after hundreds of thousands of Brazilians took to the streets to protest the election results.

The Military Deputy Prosecutor General said the Ministry of Defense was not allowed to properly inspect the electronic voting system in Brazil’s presidential election.

This led to the military enacting Article 142 against the pro-Silva Superior Electoral Court which was trying to quickly certify the election to install Silva as president.

“Three separate reports have found that the elections could not be verified, since many of the voting machines cannot be audited,” The Gateway Pundit (report linked above) stated. “The military audit required by law could not be completed because the pro-Lula Electoral Court refuses to turn over the source code of the machines.”

As one would expect, governments and mainstream media in the WEF controlled 'liberal democracies' are pushing the official narrative that the elections were free and fair and there is no evidence of malpractice. In that case why are WEF agents in Brazil so fearful of an independent audit. As this blog commented after the 2020 US Presidential Election when efforts to trigger investigations into numerous anomalies were blocked on legal technicalities judges, "if you don't look for evidence you will never find any."

The Davosocracy Gang Gather As Globalism Goes Into Retreat Worldwide
As is usual at this point in January the world’s financial and political elite are assembling in the Davos - Kloisters ski resort in the Swiss Alps for the World Economic Forum. These people, who have travelled by private jet, often half way round the wold to get to the jolly, their vision of ever-closer commercial and political ties, i.e. a totalitarian world government made up of appointees from the political, business and academic elite...

The Great Genocide: Dutch Govt Plans to Shut Down Up To 3,000 Farms To Comply With Euronazi Union Green Law
As we reported earlier in the year, in order to comply with new, economically suicidal European Union environmental laws the Dutch government’s plans to force the closure of thousands of dairy and livestock farms in order to comply with the latest and most insane to date batch of EU environment laws which aim to limit notrogen as well as Carbon Dioxide emissions. The European Union green agenda directive has been branded as the “Great Reset turned up to eleven”.

Lockdowns, The Great Reset and the Unfolding Disaster That Is Globalism

In late 2019 and early 2020 and during the COVID era of lockdowns, mask mandates, etc., trillions of dollars were handed over, (via COVID-relief packages,) to elite interests while lockdowns and restrictions were imposed on ordinary people and small businesses.The winners were the global corporations like Amazon, Big Pharma and the tech giants. The losers were small enterprises, communities and the bulk of the population, deprived of their right to work and the entire panoply of civil rights their ancestors struggled for.

Goodbye Freedom, Hello Global Governance.
If at any time during the chaos the past eighteen months you have wondered what kind of idiots are running the world and have gleefully trashed economies, disrupted social and commercial life and stripped citizens of their rights and liberties only to bring us, in late October 2021, right back to where we were in late February 2020 when the words pandemic and COVID crept into our consciousness ...

The Great Genocide: Dutch Govt Plans to Shut Down Up To 3,000 Farms To Comply With Euronazi Union Green Law
As we reported earlier in the year, in order to comply with new, economically suicidal European Union environmental laws the Dutch government’s plans to force the closure of thousands of dairy and livestock farms in order to comply with the latest and most insane to date batch of EU environment laws which aim to limit notrogen as well as Carbon Dioxide emissions. The European Union green agenda directive has been branded as the “Great Reset turned up to eleven”.


We The Good Guys Versus They The Bad Guys Reporting Does Not Make Sense For The Ukraine Crisis
Mainstream media reporting of the conflict in Ukraine has disappointed. Perhaps I was naive to suppose that lessons might have been learned from the hits their print sales and online traffic rates took as a result of their handling the COVID pandemic But instead of focusing on the most obviously newsworthy aspect of the build up to and escalation of the war, Russia’s view of NATO expansion into Ukraine and even further to Georgia and Kazakhstan, news reports have simply demonised Russia and portrayed Ukraine as the good guys.

Globalization: The False Narrative and The Death Of Western Steel Industry
In popular perception, the downfall of the steel industry in Britain, Europe and the USA symbolizes the decline of manufacturing industry in the developed world. Over the past few months in Britain two of the last remainings blast furnace steel manufacturing plant, have been in the news, both were threatened with closure, bad news for the local economies. Similar stories have been played out in Germany, France, Sweden, Italy and, most drastically in the USA where the area dubbed 'the rust belt ...