Lab-Grown Meat Set To Be A Disaster

As the uber - sociopath Bill Gates and his crazy cronies tool up to reinvest the money they stole from us poor taxpayers with their pandemic and vaccines scam by lobbying goverbments to tax cow farts and dung heaps and pig or chicken houses in the cause of saving the planet, thus making meat too expensive for ordinary punters, while simultaneously offering us the replacement for rib eye steaks, pork chops, bacon, curried chicken and lamb kebabs in the form of lab grown meat, we are hearing that, gratifyingly Gates might be set to lose a bundle on his latest obsession.

The lab grown artificial meat Gates plans to start manufacturing has, during its development stage, fallen at every hurdle. So did Windows 10 but that didn't stop it being forced on us, you might well be thinking. Well that may be true, but a slimeburger is a different cut of meat to a computer operating system. A series of government sanctioned deals that broke every law in existence relating to monopolies gave Windows a dominant market position. Gates might establish a monopoly on slime as a foodstuff but cannot stop people finding out that no matter how much they love read meat, there are many tasty vegetarian options that will be more appealing than patties of bacteria crap.

And that's just the human angle, wait 'til you see the numbers.

Don’t Be Fooled: Lab-Grown Meat Is a Disaster in the Making

Fake meats aren’t about your health or a healthy environment — they’re a tool to phase out farmers and ranchers and replace them with an ultra-processed food product that can be controlled by patents. 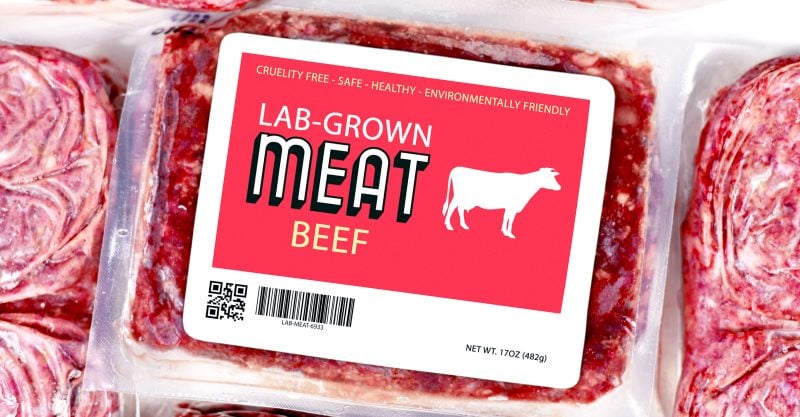 The Defender is experiencing censorship on many social channels. Be sure to stay in touch with the news that matters by subscribing to our top news of the day. It's free.

Lab-grown, or cultured, meat is being promoted as the wave of the future — the “green, sustainable” way to have your meat and eat it too. No animal suffering, no greenhouse gas emissions — just meat-like protein that will taste exactly like the burgers and steaks you’re used to. Sound too good to be true?

Underneath the greenwashed façade, lab-grown meat has been hyped beyond reality and its promises are slated to fall flat. Fake meats are not about your health or the environment’s —  they’re a tool to phase out farmers and ranchers and replace them with an ultraprocessed food product that can be controlled by patents.

Not only is ultraprocessed lab-grown meat not a healthy choice for humans, but its production is plagued with environmental and contamination concerns that are likely to thwart the industry before it ever gets off the ground.

Ironically, the real wave of the future won’t be found via technology but through the return to regenerative farming practices that have been time-tested and valued for ages.

In February 2021, the Good Food Institute (GFI), a nonprofit group behind the alternative protein industry, released a techno-economic analysis of cultivated meat, which was prepared by consulting firm CE Delft. In it, they developed a model to reduce the current costs of cultured meat production down to a point that would make it economically feasible in full-scale plants by 2030, a model they said is “feasible.”

But as Joe Fassler, The Counter’s deputy editor, wrote in an in-depth exposé about the actual science behind lab-grown meat, this would mean lowering “the production price from over $10,000 per pound today to about $2.50 per pound over the next nine years — an astonishing 4,000-fold reduction.” ... Continue reading >>>

World Health Chiefs Say ‘Red Meat As Likely to Cause Cancer as Smoking’
Another way of looking at this article of course is to say that it is an admission by the WHO that cigarette smoking does not cause cancer, which while true is a dangerous thing to say because after non stop anti - tobacco propaganda for the past fifty years, such a statement would be open to being interpreted as meaning cigarette smoking does no harm.

Food health fascism: Salt, Sugar, Saturated Fat, Alcohol, Cheese, Fizzy Drinks, Chocloate, ... if you enjoy it, it will kill you - maybe.
We are all familiar with those health scare stories that seem to pop up in mainstream media at least once a week claiming this that or the other will kill us. Few people spot the irony in that a few days earlier the same sensationalist rag will have carried a story under a similar screaming headline, claiming that scientists have found the stuff being demonised is in fact good for us ...

After Cigarettes and Alcohol, The Government Plans Sugar Tax
The election may have put a Conservative government in power and consigned the pokenoses and busybodies of Labour and the Lib Dems to the political wilderness, but the bansturbators of the public sector march on, their war against pleasure, laughter, tasty food and anything that might put people at risk of enjoying themselves continuing unabated it seems.

Labour, the (very rich, elitist) People's party plans to ban your beer and piesAre Labour still the peoples party or have they forgotten their core voters and working class roots and sold out to the metrpolitan left-wing intellectual media mafia. After the latest P R faux pas, few voters over 40 will be able to asociate the people's party with cloth caps and ciggies. Ed Miliband's proposed crackdown on tobbacco, alcohol and 'unhealthy eating' could well be the policy that loses the election.


Food Fascists Spread Fear and Panic About The Obesity PandemicIn another of our consciousness raising initiatives Greenteeth, the parent company of The Daily Stirrer, Little Nicky Machiavelli and Boggart Blog has created the Golden Orwell Awards. Today we award the Golden Orwells to Doctors, The NHS and the British Medical Association for their services to fascism in bending the truth about the health threats posed by obseity, alcohol and lack of exercise. We suggest the risks are not as great as will be posed by doctors withdrawing threwatment from those who do not obey.

Frying Pan FascistsNanny State and the food fascists who work for her have yelled at us about cigarettes, alcohol, sugar and idleness. Now these sad, busybody bansturbators are getting on our case about fat and fried food. But natural fat is not dangerous, only too much fat and the wronmg kind of fat is dangerous. And what is the wrong kind of fat. The highly procressed low fat spreads the bansturbators are always teling us is healthy. Science my arse. Everything They Said Is Bad For You Is Good For YouJust when you thought it was safe to go back into the pleasuredome Nanny State's Politically Correct Thought Police are now using CAll Me Dave's Dave's nudger try to nudge us towards being better citizens, eating healthy options, drinking less booze, avoiding dangerous sports like bowls and tiddleywinks, driving less miles and being less idle ...
Latest Fear and Panic Strategy: They Tell Us We Are All Going To Starve

Have you noticed it has all gone a bit quiet on climate change? After all that screaming and shouting from politicians and scientists it turns out the science was never settled. So now they need to spread fear and panic about something else. Guess what ... Food. We are all going to starve if we do not obey The New World Order. Who says? Statistics say and we all know statistics never lie don't we? A must read for independent minded people.

And The Truth Is A Low Salt Diet Is A Health Risk?Conventional wisdom tells us too much salt in our diet is a health risk but many studies showing the opposite is true are not widely reported. Have health experts and medical scientists been taking lessonb of the climate change science crooks and liars?
Doctors Caught Lying Again - Long Term Paracetamol Use Can KillFor years doctors and health scientists have mocked fears that long term use of paracetamol can harm heath and even be fatal. A new study proved the punters were right and the doctors were lying again ...
In The Wake Of The Crusade Against Carbon Dioxide, the Jihad Ahainst Junkl Food - the case that carbon dioxide was the sole cause of climatre chaos and justification for massive fuel taxes has collapsed but in its wake comes the jihad against junk food with ... yes ... proposals for a tax on unhealthy food.
Acohol Abuse Will Kill 250,000 A Year Unless Governmnt Acts say Control Freak Doctors
The Health fascists have been out in force this week. With reports on the dangers of alcohol, meat, salt and obesity published our resistance is being tested. The Daily Stirrer is on your side whether you like a drink, a bit of meat, a sprinking of salt on your food or you are a shade overweight. We are always happy to expose the dodgy scence and rigged evidence behind theses control freak fear and panic exercises.

Scientists And Politicians Attack The Food We Love, But Is It Science Or Just Control Freakery
A sustained campaign of misinformation by politicians, scientists, bureaucrats and the media have tried to brand fat and salt as the twin demons of the modern diet. Both however are essential to our wellbeing. So what are the bureaucrats, government and science lobby up to. What is the politics of food fascism. Are they just behaving as control freaks must or are they softening us up for extra taxes and government regulation of our dinner plates and the food we eat.

Face It: Eating Shite Makes You Fat And Ill
Governments are worried that we as a nation are getting too fat. Bigger ambulances and bigger prison cells are needed. They blame the public for lack of self control. But we are being brainwashed by advertisinf and the food industry into eating toxic chemicals that make us gain weight. Hilreious comedy rant.


Governments' obsession with climate pseudoscience over economically and social viable solutions is leading to disaster
The government's current obsession with pursuing the target of net zero carbon emissions in order to claim the UK leads the world in green wankery is more to do with virtue signalling that governing, but with the complicity of mainstream media, particularly The BBC, climate scaremongering is providing a convenient diversion from this governments abject failure to address and of the very real economic and social problems facing us.