We’ve had a number of armed kerfuffles in Europe fairly recently but these were mostly centred on The Balkans and were local affairs, wars of independence, and ethnic conflicts. They always attracted plenty of media coverage because sensation sells, but none even came close to escalating ito wider European and global conflict.

The threatened bust up between Russia and the west over Ukraine is much more serious – potentially the worst inter-regional conflict since the cold war, with far reaching consequences for both geopolitical and economic stability if mainstream mediaeports are to believed.

Unfortunately after two years of non stop proaganda and scaremongering as mainstream media tamely parroted the official narrative over the COVID pandemic, with that narrative now collapsing under the weight of evidence that the vaccines don't work, lockdownds did more harm than good and COVID is not really a serious threat to anyone who is less than 150 years old and is not half dead already with some pre - existing condition, government and mainstream media have lost the trust of the public and have less credibility that the world champion liar.

It may even turn out to be the case that the massively hyped minor confrontation in Ukraine could escalate into global war is being exaggerated for the purpose of distracting from the colapse of the killer virus narrative.

Whether this scepticism is justified depends on the answers to two, interconnected questions; what does Putin have in mind and what will be the Western response to it?

For the moment the possibility diplomatic engagement suggests this is more a game of chess than Russian roulette. Putin has set out his list of demands, which amount to reconstructing the sphere of influence Russia then enjoyed before the break up of the Soviet Union. These demands include a ban on Ukraine entering Nato and a limit to the deployment of troops and weapons to Nato’s eastern flank, in effect returning Nato forces to where they were stationed in 1997, before their eastward expansion.

The USA has now ruled out full scale military retaliation, after demented president Joe Biden had promised a military response if Russia attacked Ukrain, then in the next breath appeared to condone what he called a limited incursion and ended up warning Putin of “sanctions like he’s never seen” should his troops attack Ukraine. In the event, the sanctions so far proposed are rather less scary than those promised. In any case, the list of potential sanctions detailed in the draft submitted by Democrats to the US Senate, and apparently commanding the support of the White House, are not going to much bother Putin, but as we hav pointed out previously will hit America's allies far harder than they will hit Russia.

This is true, Russia has little trade with the USA and buys little from EU nations but as a major supplier of energy to E U states, chiefly Germany, Russia is in a powerful position to wreak havoc on the economies of NATO members and Vladimir Putin is aware of this. Fr sanctions to have real impact, the West would have to do the same as it did with Iran, banning its exports of oil and gas, and removing Russia from the Swift international payments system. Neither of these actions looks realistic as banning oild and gas exports by Russia would cripple Europe economically, while Russia and China set up their own system for cross border trading in 2017 and this is now supported by over 100 nations.

Now self-sufficient in energy, the US could possibly weather the storm, but the costs to the global economy in terms of higher, already stretched, international energy prices would be crippling. The pain would be most acutely felt in Germany, which is reliant on Russia for about 60pc of its natural gas. That dependency is being made worse by the imminent closure of Germany’s remaining nuclear power stations.

Small wonder that the German chancellery is incapable of deciding where it stands. It’s not just its dependence on Russian gas. Many Germans have a sense of affinity with Russia, “Russlandversteher” as it is called, which is deeply and culturally ingrained and at least as great as that felt for the West. More so than any other European country, Germany looks both ways. 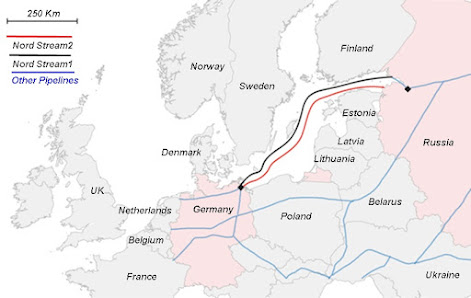 The grim truth is that Putin has got the increasingly shambolic Western world over a barrel. Sadly the case is that through their idiotic commitment to 'green' policies, obsession with setting unachievable targets for reduction of CO2 emissions and blind faith in 'The Science', western leaders have handed their collective rump to Putin on a plate. The clowns who lead us did much the same for Xi Jinping's China by handing the Chinese most of our manufacturing sector due to crackpot economic theories of another bunch of pseudo - scientists And while western leaders rush to sell us a poor little Ukraine narrative they seem to forget Ukraine is the second largest country in Europe, a thuggish ethno-state where corrupt oligarchs play Game of Thrones, where the opposition leaders are in jail (Medvedchuk and Poroshenko), where the American and Nato coup produced a far-right fascist government which has begun a hate campaign against the language, culture and history of the Russian half of the population, where segments of the military openly display Hitler-era icons, flags, and symbols while being trained and funded by Nato, and where the land's connection to Russia and the sovereignty of the Russian population are being denied and cleansed out of existence.

Rather than turning away from this mess which is nothing to do with Britain our leaders, along with the Americans, are arming Ukraine's far - right government thus encouraging them to continue provoking Russia. Have the ruling elite of Nato learnt nothing from the similar experiment with the mujahadeen? This time these mujahadeen are literally on Europe's doorstep.

The British media is also behaving irresponsibly as usual and has got to stop this misrepresentation of the Ukrainian situation. One influential figure, in parroting the official lines described Ukraine as "this aspiring little democracy" when a more accruate description since the US / NATO engineered 2014 colour revolution would be "the CIA approved government imposed after the CIA /MI6 /Soros Maidan revolution in 2014 "

Ukraine had a Russia leaning democratically elected government which interfered with the West's ambition to pick off Ukraine as yet another new NATO member which if accompanied by Kazakhstan would be game set and match for NATO.

Putin won't sit on his hands as the biggest and most aggressive military alliance the world has ever seen encircles Russia and threatens its existence.

The west used to have the old drunk Yeltsin who gifted the Davos boys the entirety of the Russian resources, Putin sent them to the siberian salt mines and reclaimed Russian resources from the crooks who had stolen them. He eliminated Russian external debt He acquired over 1000 tonnes of gold. Vladimir Putin is no fool. Meanwhile germany's newly installed Chancellor Scholz is absolutely terrified Putin turns off the gas tap, so the Germans as always look after No1. Macron is running round in circles shouting EU unity -- so there is NATO unity for you. RELATED POSTS:

Is The Russian Threat To Invade Ukraine Real Or A Globalist Conspiracy Theory?
While Joe Biden's handlers in Washington and Boris Johnson In London talk up the threat of war should Russia invade Ukraine as they claim Moscow is preparing to do,Ukrainian leaders are dismissive, accusing the west of ramping up hysteria in a bid to divert attention from oither problems ... Continue reading >>>