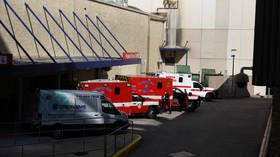 Houston Methodist Hospital in Houston, Texas, US, 2020. © Callaghan O’Hare/Reuters
More than a hundred people have lost their job at a Texas hospital after refusing to get a coronavirus vaccine and unsuccessfully challenging the mandate in court.

Houston Methodist spokesperson Gale Smith told the media that 153 workers had their employment terminated or resigned on Tuesday. They were all among nearly 200 employees who had been suspended for missing the June 7 mandatory vaccination deadline. Smith added that those who ultimately got the shot were allowed back on the job.

The Houston Methodist healthcare corporation runs eight hospitals and employs around 25,500 people, including close to 7,750 doctors, according to its website.

A US court earlier this month threw out a lawsuit by 117 employees who said they did not want to serve as “guinea pigs” and argued that the vaccines made by Pfizer/BioNTech, Moderna and Johnson & Johnson are not safe enough because they had only received emergency-use approval from the US Food and Drug Administration (FDA). The full approval by the regulator required a more thorough review.

The US Centers for Disease Control and Prevention (CDC) insists that Covid-19 vaccines are safe and effective, pointing out that over 317 million doses have been administered across the country by Monday.

There has been some political pushback against possible discrimination based on vaccination status. States like Alabama, Arizona, Florida, Georgia, and Iowa banned vaccine passports, according to US News & World Report.

So now they can mandate unapproved medical experiments, and if anything happens it tough luck for you, you can't even sue for damages. Very dangerous precedent set by the kangaroo court.

Now an employer can offer up employees for medical experiments without regard for ethics or liability. And the employees will be faced with complying, or unemployment.
But the most appalling aspect of this story is that prior to the emplyees actually being fired, staff at the hospital had challenged managements mandating of vaccination for all employees, won their case and had the verdict overturned by a politically motivated judge who heard the hospital management's appeal. The district judge sided with the hospital management in violation of the US Constitution, civil rights law and The Geneva Convention on Human Rights (1948) and said that employees can be fired for not taking experimental gene therapy.
Same thing is happening in Europe where people working for government, including front lined medical staff and teachers, are being forced to get the jab at a threat of losing their job even though there is almost zero chance of their being seriously affected by this virus.
Different countries, similar methods, and as restistance to being genetically modified by thius vaccine which will regrogram your own DNA to poison you grows, with more and more people becoming informed via alt_media of the nature and effects of these phoney vaccines, the efforts to bully or coerce people into getting a vaccine which does noty make them immune to the disease but instead turns their body into a factory producing the pathogen carried by the virus, will become more forceful.
RELATED: