Readers of this blog do not need to be reminded that the kind of politicians who worm their way into influential and well rewarded jobs in supra nation bureaucracies like the United Nations and its plethora of offshoots, NATO or the European Union are elitist shits who despise the people they are paid to serve and think sovereign nations should be liquidated and a global authoritarian government of bureaucrats, academics and financiers appointed to run the world.

It should be no surprise then that the recently appointed successor to the perpetually bewildered Korean Ban Ki Moon as General Secretary of the United Nations is somewhat less than committed to the principles of democracy and national sovereignty and an out and out fan of globalism.

Speaking at the Vision Europe Summit in Lisbon, Portuguese politician and apparent global nation enthusiast António Guterres said European nations have no right to control their borders and that must instead take in floods of the world’s poorest, most illiterate and most savage people. The ignorant buffoon does not understand how the business of getting illegal immigrants across borders into liberal nations works and how it condemns the immigrants to miserable lives or even more miserable deaths. 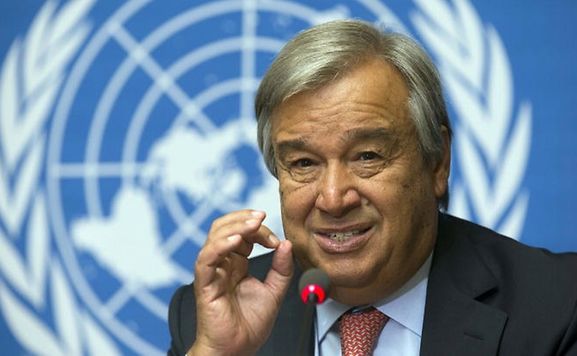 And what do illiterate, unskilled, third world immigrants contribute to Europe, Snr. Guterres? Does that gesture mean 'nothing at all sir?
"The idea that management of migration is a matter of national sovereignty is extremely limited. The truth is that in the meantime, the real controllers of international mobility are the smugglers and criminal organisations. It must be recognised that migration is inevitable and will not stop", the socialist world domination freak told the crowd of social policy experts. Clearly this idiot is as far out of touch with reality as the recently defeated New World Order candidate in the US election, Hillary Clinton, the outgoing president Barack Obama, the idiots who are trying to overturn the Brexit vote, and the massively unpopular European leaders Angela Merkel and Francoise Hollande, whose dogmatic, idiotic committment to 'open doors' immigration policy has led to their presiding over mounting civil unrest in Germany and France as police and vigilante groups battle in the streets with gangs of lawless migrants.

On the other hand we could just round up the people traffickers and shoot them. FFS we have military and police forces with sophisticated technology, are we seriously being asked to believe we can't stop these people? As we have reported HERE, HERE, HERE and HERE and HERE the authorities are so in thrall to the ideologically driven globalist way of thinking they do not want to deal with immigration related crime because they fear upsetting the immigrant community leaders. The citizens of developed nations can fuck the fucking fuck off of course, our feelings are irrelevant.

Regarding priorities for the UN, when he takes over from Ban Ki-moon as Secretary-General, Guterres said he already has "several items to put on the discussion table to drive positive developments" with regards to the goal of making Europe accept more migrants. Good luck with that one Antonio, what planet have you been living on throughout the past twelve months?

The delusional sardine scoffer believes will take place in the form of developing legal migration opportunities as the only way to fight against criminal networks, he hinted. Guterres is obviously another single figure IQ genius from the same Bokanovsky Group as Barack Obama, everybody associated with The Clinton Crime Syndicate, Paul Krugman, Pope Francis, Tony Blair, Bill Gates (who never wrote a computer program in his life), and lower down the feeding chain most academics, talking heads on mainstream media and Hollwood airheads who treat us to their vacuous political utterances.

Guterres went on to insist that every European Union (EU) nation must be forced to “share the burden” of mass migration. Once knowledge of that seeps out it can only speed up the exodus of member states from the increasingly fascistic EU, with the race to follow Britain to the exit already underway.

Despite having accurately used the word 'burden' to describe giving residence to large numbers of unskilled, illiterate aliens, the 67-year-old went on to declare: "We must convince [Europeans] that migration is inevitable and that it is the multiethnic societies which are multicultural and multireligious who are building wealth." What does this paskudniak hing the EU and Europe's left wing politicians have been trying and failing miserably to do for the past five years?

The UN’s next head acknowledged he is not convinced that it will be easy, given the state of [public] opinion. Calling for politicians to put tolerance and reason at the heart of their decision making, Portugal’s former prime minister urged lawmakers to prioritise values over respecting voters’ wishes he could have been reading directly from Barack Obama's teleprompter.

He stated: When elected officials hesitate to choose between values and the next election, I would advise them to choose values. If they go for short term [electoral gain] they will lose both, because there will always come a time when they lose an election At that point, it becomes very hard to recover the values that have been abandoned. He also prattled the old and dicredited line that mass immigration of unemployable losers increases the wealth of developed nations.

Research carried out by University College London psychology professor Dr. James Thompson shows Europe is being harmed by mass migration from poorer countries, as on average the newcomers’ intellectual competence is much lower than that of natives. And that takes no account of the violence in cities, the Sharia Law zones and no go for Europeans areas unilaterally declared by unofficial Muslim authorities and the rape epidemics experienced by women and children in several liberal nations, at the hands of Muslim third world savages.

Partly as a result of their culture and partly due to genetics, he notes that the difference in intelligence results in migrants having lower status, lower wages and higher resentment at perceived differences than natural born citizen of European nations.


Brexit - The End Of The European Superstate Dream?

David Cameron, having won the election with a wafer thin majority is now under the cosh from eurosceptics in his own party as well as party managers panicked by the rise of UKIP. He has promised an early in-out referendum on Britain's future membership of the EU but can he win the concessions he needs to secure a yes vote from the punters

Gogglebox on the Charlie Hebdo atrocity
Mainstream media has lost even more cribility because editors were afraid to publlish the Charlie Hebdo cartoons that are thought to have provoked the attack. boggart Blog, fearless as ever, has run them, along with our own cartoon on the topic.

"Sweden, that's where they commit suicide and the king rides a bicycle," a character in an Alan Bennet play famously said back in the 1980s, a reference to Sweden's reputation as the most boring country in the world. That reputation has long gone, thanks to 'enlightened and progressive' immigration politicies, the elegantstreets of Sweden's gothic styled cities are now more like Chicago in the Al Capone era.

Sham Marriages To Beat Immigration Laws Are Out Of Control

With main immigration news on being dominated by the Mediterranean boat people crisis and the masses at Calais hoping to stow away in a freight container, we forget that another way of getting somebody into the country is the sham marriage. Numbers involved may be small, but it is another indication of our governments' failure to address the immigration problem.