An investigation should begin to see if Bergoglio also assaulted children.

This information is now going to be passed on to all media outlets in all countrys. and to relevant police authorities

Although not a Catholic in any stretch of the imagination, I believe the position of a person who is the head of billions of people should be beyond reproach. It now seems that the smiling Pope Francis might be hiding a very dark secret 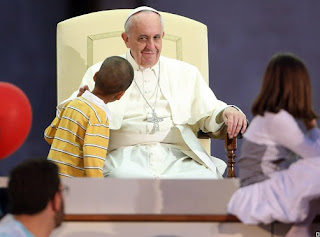 Fr. Rubén Pardo – In 2003, a priest with AIDS who had admitted to his bishop that he had sexually assaulted a boy was discovered to be hiding from law enforcement in a vicarage in the archdiocese of Buenos Aires, then headed by Bergoglio. Pardo also was reportedly hearing children's confessions and teaching in a nearby school. One of Bergoglio’s auxiliary bishops, with whom he met every two weeks, appears to have lived at the vicarage at the same time. Typically, an ordinary must give permission for a priest to live and work in his diocese. It is unlikely that Pardo lived and ministered in Buenos Aires without Bergoglio's approval.

Father Rubén Pardo sexually assaulted 15-year-old Gabriel Ferrini on 8/15/2002 at the priest’s residence at the Seminary House of Formation in Berazategui. Two days after the assault, the boy’s mother, Beatriz Varela, met with the bishop of the Quilmes diocese, Luis Stöckler. Varela, a devout Catholic and teacher at a Catholic school, asked Bishop Stöckler to report Pardo to civil authorities and expel him from ministry.

The mother later testified that in a second meeting with Bishop Stöckler, he told her he had met with Pardo on 8/19/2002 and that Pardo admitted to the assault. Pardo was repentant, he told her, and the case would be handled according to canon law. According to Varela, Stöckler advised her to have mercy because celibates have "moments of weakness." The bishop gave Pardo a reprimand, urging him to leave the diocese and refrain from saying Mass and heading confessions for one month. In a 2004 “open letter,” he said he also immediately reported Pardo to the Holy See, which ordered a church trial to begin in the ecclesiastical tribunal in Buenos Aires. The bishop did not order Pardo to stay away from minors and he did not report him to civil authorities.

The bishop paid for therapy for Varela and her son for four months. Varela later testified that the bishop terminated the payments when he learned that Varela had consulted an attorney. The bishop denied this; he said that it was Varela who decided to stop accepting the payments.

In late 2002, Varela learned that Pardo carried the AIDS virus. At around this time, she tried to report Pardo to the inter-diocesan ecclesiastical court located in Buenos Aires, next to the headquarters of the Buenos Aires archdiocese. According to Varela, she was kicked out of the waiting room by a monsignor, the court's president, who told her to report Pardo to her diocese instead. A priest in the waiting room offered to bring her to Cardinal Bergoglio, whose office was in an adjacent building, the Curia Metropolitana. Varela went next door and requested a meeting, but because she did not want to tell the receptionists the specific reason she needed to speak with the cardinal, they would not convey her message to him. Security was called, and she was escorted from the premises.

Varela filed a criminal complaint on 2/7/2003. On 2/27/2003, the prosecutor, Pablo Pérez Marcote, asked the diocese ‘urgently’ to tell them Pardo’s whereabouts. The diocese was evasive, saying that Pardo had left the diocese and that no other destination had been assigned. In September 2003, Pardo was discovered living in the Flores neighborhood of the city of Buenos Aires. According to a Página/12 article, he was residing at Condarco 581, which was both a vicarage of the Archdiocese of Buenos Aires and a home for infirm and retired Buenos Aires priests. The archdiocese was then headed by Bergoglio. Pardo reportedly was hearing children’s confessions and teaching at a primary school in the Flores neighborhood.

In 2003, the victim and his mother sued the Quilmes diocese for cover-up. In May 2004, a month after the Pardo case was exposed on national television, Varela and Gabriel Ferrini were summoned to the inter-diocesan ecclesiastical court, in the city of Buenos Aires. According to Varela, the four priests on the panel asked “lascivious” questions that had nothing to do with Pardo’s criminal act. Bergoglio was Moderator of the tribunal but was not present at Varela’s hearing.

On 6/10/2005, Pardo died of AIDS, ending the criminal case against him. In October 2012, a Quilmes court ruled that the diocese was culpably negligent in its management of Pardo and ordered it to pay restitution to Gabriel Ferrini and Beatriz Varela. The diocese appealed, arguing : 1) that Pardo was an employee not of the diocese but of an autonomous parish; and 2) that Varela was partly responsible because she had allowed her son to spend the night at the priest’s residence. In April 2013, the Quilmes appeals court rejected both arguments and upheld the ruling of the first court. The diocese was ordered to pay the plaintiffs compensatory damages of 155,000 pesos plus ten years’ interest. It is the first civil judgment against an Argentine diocese for mismanaging a sexual predator.

BoJo Was Correct – The EU Was A Nazi Idea12 things UK voters need to know before voting in the EU referendum
from Maj. Graham W Lear (ret'd)

1. If Britain stays in the EU, within the next 6 years we will convert to the Euro. The Pound is and always will be the stronger currency and is a reserve currency, why would we change this?

2. Britain has one of the most professional and strongest armed forces in the world, why would we want to rely a European army?

3. Britain and Germany are the only two countries in Europe that bring in a positive balance of money, of course Europe don't want Britain to leave.

4. 1 in 5 European Union officials get paid twice as much as the British prime minister.

5. People think we control our borders, we don't, we just security check them as we are an Island. If you have a European passport you are eligible to come in to the UK and why wouldn't you if you could have a better life there than in your own country? Not a problem but Britain is an island and can only hold so many people.

6. Thousands of laws a year are implemented in the UK every year from the EU, most of which are irrelevant to the British people but the British Parliament have NO say whatsoever!

7. For every pound the EU spend on certain projects, we have to pay them double!

8. Free trade deals - free? I was under the impression we paid £50 million pounds a day to stay in! That's nearly £13 billion pounds a year!!!! Surely this could go towards our NHS, or is this the next step, European healthcare?

9. People wondering why we joined in the first place? - it was originally called the European Common Market when we joined in 73 and was all about trade, over the years it has become political and is the reason why the British people are calling for a vote - they don't want to lose their identity and want to have their own say!

10. Trade deals - the EU has restricted us from trading with China, India etc. If Britain leaves, Britain will have plenty of opportunities to agree trade deals all over the world including Europe. Look at the money Britain spends! 5th strongest economical country in the world!

11. Leaving the EU will give more jobs, higher pensions, higher wages, it's own democracy and hopefully save the world's best health service!

12. Staying in the EU means you will have no extra charges on your phone bill whilst on holiday! Who cares? Half the country can't afford a holiday as most of the money is tied up in a union where the country have to pay £13 billion a year and have nothing to show for it.And let's not forget the TTIP our brilliant NHS The yanks secretly want to take off us!!!.