The number of Afrcan Americans murdered in 2020 soared by 32 percent in the year after the killing and subsequent canonisation of St. George Floyd. One criminologist blamed BLM protests for the huge spike by scaring-off cops with their hate - mob tactics the law officers were scared to act against  black criminals. Ironically most of the murders of black Americans were committed by other black Americans. 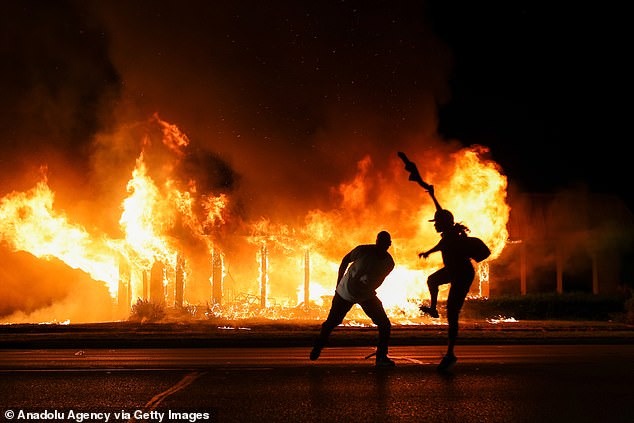 Protesters lit buildings on fire in Kenosha, Wisconsin after the police were involved in the death of george Floyd, August 2020 - picture: Daily Mail
It is bizarre but not entirely surprising to anyone who has researched the origins and political agenda of the Black Lives Matter movement that BLM leaders have nothing to say about this. Clearly as far as the anti - white racists take the view that Blak Lives only matter when they are the lives of criminals trying to play the race card to avoid facing the legal consequences of their activities.

Killings across the whole of society swelled by 30 percent between 2019 and 2020, the largest increase since 1905, but blacks bore the greatest impact of that deadly trend, according to the FBI's Uniform Crime report.

She believes that the widespread 'woke' ideology, which demonizes law enforcement and deifies minorities - combined with cuts in funding to many inner city police departments - prompted cops to withdraw from policing areas with high crime, thus allowing black activists to establish no - go zones for police and emergency services.

Meyer also said that the Biden administration was wrong to place blame for the crime wave on the  COVID pandemic and attributed it directly to the crime wave that followed Floyd's death at the hands of his arresting officers.

In 2020, the year lockdowns and curtailment of civil liberties began, due to the hoax pandemic, 7,043 white people were murdered, but black deaths still outpaced white deaths by nearly 3000 that year.

With whites making up 76 percent of the U.S. population, according to the U.S. Census bureau, compared to the 13 percent black population, the trend is even more troubling, thought the greatest percentage increases occurreed in sparsely rural areas and were more likely to be the result of domestic conflict, Pennsylvania, Illinois, Ohio and California murder rates all jumped at least 36 percent between 2019 and 2020. New York homicides jumped 47 percent with Chicago showing a similar spike. And these increases were from a much higher base figure. Despite the lower percentage rates of increase, the big cities saw far more lives lost to violent crime. We should not forget the most basic trick of propagandists: ten per cent of 1000 is 100, fifty percent of 100 is 50.

Diversity" Is a Weapon Against White People
Visit some parts of most British cities with large immigrant populations and you will be hard pressed to recognize it, certainly my granparents would struggle to recognize the towns they knew. Appeasement of foreigners has destroyed the character of our communities but as usual the political left advise solving the problem by doing over again the things that caused it.

‘Why is My Curriculum White?’ Campaign Forces Oxford Uni to Introduce Compulsory Black History Exams
Britain’s oldest and one of its most prestigious universities has come over all Brack Obama and yielded sanity and academic impartialityto politically correct bigotry from a National Union of Students (Special Snowflake branch)campaign with rejoices in the title, ‘Why is my curriculum white? The snowflakes who are mainly white themselves but are too thick to have noticed that, are protesting against the alleged “Eurocentrism” of history teaching.

EU Parliament Passes Resolution On Ban Of ‘Neo-Fascist’ Groups, Lists Identitarian Movement
The most undemocratic democratically elected body in the world, The European Union Parliament this week passed a resolution demanding that member-states ban ‘neo-fascist’ parties and groups and co-operate with ‘anti-racism’ NGOs [...] The motion, which was introduced at the request of Italian MEP Eleonora Forenza, was passed by a vote of 355 MEPs. Many MEPs were not present in the 751-seat chamber for the vote.