E U warned of 'Devastating Consequences' of German Bid for Monsanto

German chemicals and pharmaceuticals giant Bayer has launched a hostile takeover bid for US agrichemical and biotech firm Monsanto which freedom and anti corporatism activists warn will have "devastating consequences" for independent farmers at the same time as the European Union is debating banning one of Monsanto’s most profitable fertilizers.

Bayer's bid has raised eyebrows in the German media because Bayer enjoys a good reputation as a chemical company, whereas Monsanto is despised for its cavalier attitude to national law, product safety and consumer rights. The corporation promotes generic modification and produces the controversial herbicide Roundup, which contains glyphosate, a herbicide currently facing an EU-wide ban because of cancer fears after the World Health Organisation reported that the herbicide 'probaly' causes cancer in humans.

"The proposed Bayer bid for Monsanto will have devastating consequences for farmers and consumers across the globe. The creation of a mega-corporation that is both the world's biggest seed and pesticide company means that a single organization will be handed almost total control of our foods, what we eat and how it is grown.

"This should worry all of us as we already know that these agri-businesses use aggressive techniques to further their market dominance which do not act in the best interests of farmers, public health or the environment,"

Roundup Ready crop seeds, produced by Monsanto, are resistant to its Roundup herbicide, which means farmers around the world can buy the seeds from Monsanto and then treat them with its own herbicide. More controversial is that the crop seeds are sterile – known as terminator seeds – which means that farmers – often in the poorest areas of the world – have to buy fresh batches from Monsanto each year, rather than taking seeds from the growing crop.

While many independent scientists have questioned the short and long term safety issues attached to Monsanto's products, this blog's concerns are economic and social. We have reported on the contracts forced on independent farmers in poor third world countries who want to, or are coerced into using Monsanto GM crop seed by corrupt government officials. These contracts tie the farmers into Monsanto seed and products for life or until they are forced into bankruptcy.

At the same time the contract makes it almost impossible for Monsanto to be held responsible for crop failure or any harm done to human or animal health.

The Hidden Genocide In Syria:Obama's Moderate Rebels As Brutal As ISIS


The two biggest jokes about the conflict in Syria, if anything about that horrible war could be describes as a joke) have come from the mouth of US President, Barack Hussein Obama. The first occurred when in response to the Russian intervention in support of and at the request of the Assad regime (which, whether we in the west like the way Assad rules or not) is the legitimate government of Syria) Obama complained that the Russians were hitting 'moderate rebels' who were fighting Assad, rather than ISIS targets.

The second came when The Rent Boy President, who during his two terms sold his office as shamelessly as during his youth he (allegedly) sold his orifice to rich old white men in order to fund an expensive cocaine habit, boasted that one of the great achievements as President was bringing peace to Syria. Obama, has no sense of irony, when he made that statement fighting was at its most intense both in eastern Syria and around Aleppo near the Mediterranean coast as Assad's forces, backed by Iranian elite troops and Russian air strikes took on the extremists of ISIS and the Free Syrian Army (Obama's moderate rebels.)

Saturation coverage of events in Syria is believed by most people in the developed world, who still trust the BBC, CBS, NBC, Sky News,RTL and a host of other channels in Germany, France 24 and of course print news believe they are well-informed about what is going on around the world and particularly in hotspots like the middle east. They regularly see news stories about tyrants like Assad, Saddam Hussein in Iraq and Gadaffi in Libya before they were overthrown (due to western intervention, both, like Assad were suppoted by their people) committing atrocities against their own people and hear pompous statements from Western leaders and top bureaucrats about how order must be imposed.

What is reported in the news however offers a very narrow view of what is going on, and because the sources are controlled by government and corporate interests, what is reported is so biased to promote vested interests it is actually worse than blatant lies.

For example, on the 12th of May, 2016, completely unreported by mainstream media, a massacre of women, children and non combatants (old and disabled people, Christians, Kurds, Jews etc. was committed in the town of al-Zara in the southern contryside of Hama, Syria. People who were not Muslim, the wong kind of Muslim or supporters of Assad's government were slaughtered by Takfiri death squads, the terrorists eulogised by the USA's terrorist loving president as as ‘moderate rebels’. There was no mention of the massacre in the Western press. The massacre was not mentioned by western news services because to expose the 'moderate rebels' as the same savages who in 2012 were posting videos online of their squad leaders eating human organs cut from still warm corpses would not be helpful in advancing the globalist agenda. 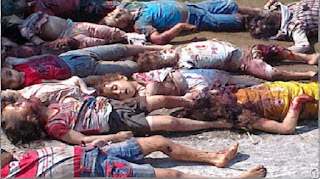 Witness the handiwork of Obama's moderate rebels - I strongly suspect this picture is under copyright but having found it uncredited on another blogger's site I decided to republish in the public interest (fair use)
The fact that there are no 'moderate' rebels in Syria, only savage, brital Islamic extremists, has been admitted by the U.S. Government several times. Vice-president Joe Biden has admitted it, the Pentagon’s General Dempsey has admitted it, Tulsi Gabbard of the US Armed Services Committee has admitted it, and the Defense Intelligence Agency has admitted it. Western corporate media agencies have themselves admitted that for the US led Western allies the priority, Barack Obama's priority, was to overthow Assad, the thousands of innocents who lost their lives are just 'collateral damage' and one thing Barack Hussein Obama has accurately boasted of while president is that he is 'good at killing people'. NATO chiefs have admitted supporting al-Qaeda terrorists in Syria in an attempt to overthrow President Assad, yet, perversely, the same media systematically re-brand barbaric head-choppers and child murderers as ‘moderate rebels’, when their heinous crimes deliver advantage to NATO foreign policy objectives.

The Western-backed, NATO funded (via Turkey) terrorists love to record their atrocities and share the images on Facebook or YouTube, or post pictures of the murdered women and children on social media. These pictures are then displayed across all the front pages of corporate newspapers and flashed across television screens. Emotions, mostly fear and loathing are aroused. The terrorist agenda is advanced.

Western governments bluster about the necessity of 'humanitarian intervention' (drone strikes) to avert a humanitarian crisis, but in Syria, Libya, Yemen, Ukraine, Egypt, Iraq and Afghanistan and South Sudan. have in the past decade resulted in humanitarian disasters This time there was silence. Nothing is gained politically by the cabal of developed nations driving towards a global, authoritarian government, by acknowledging that the terrorist is NATO, that the USA and its allies (mainly Britain and France hence The FUKUS axis) that has funded equipped, trained and the ISIS brutes who use rape as a weapon of war and that it is actually the Syrian Arab Army loyal to Assad that is fighting terrorism supported by Russia, Iran and China. If the masses knew this, there would be a revolution, warmongers would be overthrown and middle eastern, Asian, African and South American nations would be left alone so that their societies could develop in ways that suit the local mindset and environmental conditions.


Syria: Obama's Worst Mistake?
The real legacy of Obama's administration of course will be in the area of foreign policy, where the utter ineptitude of Obama and his liberal cronies have reduced his promise to usher the world to an era of harmony and prosperity to ridicule as he has stumbles from one disaster to another. A very special kind of incompetence was required to make the messes created by his predecessor George W Bush in Iraq and Afghanistan worse, but Obie managed to pull it off.