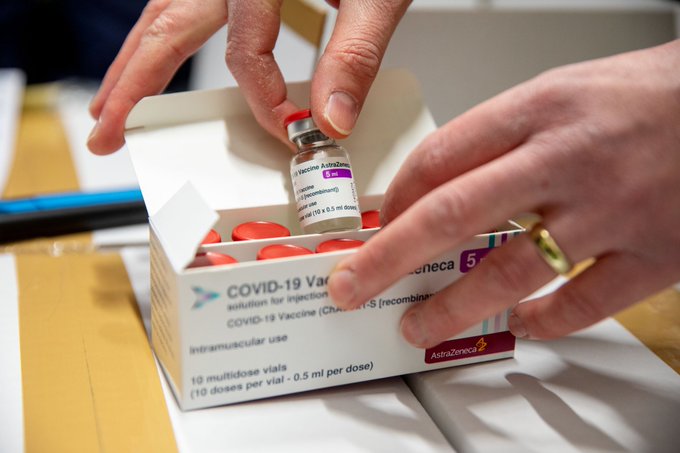 The Netherlands has joined eight other European nations in halting the rollout of AstraZeneca’s Covid-19 vaccine for at least two weeks while an investigation into possibly serious side effects from the jab is undertaken by the European Medicines Agency (EMA).

The decision, described by all the nations involved as precautionary, will block further vaccinations with this particular vaccine until at least March 28. It has been made on the strength of  new information from Norway and Denmark regarding potentially serious side effects in people who received the inoculation, Dutch Health Minister Hugo de Jonge said on Sunday. Norway and Denmark, both nations noted for their high standards of healthcare, took the decision after reports from care homes and hospitals that people with no previous record of circulatory problems developed blood clots shortly after receiving the vaccine, occasionally with fatal results.

“We can’t allow any doubts about the vaccine,” de Jonge said. “We have to make sure everything is right, so it is wise to pause for now.” Dutch health authorities reportedly had to cancel 43,000 vaccination appointments because of the suspension.

It is a pity governments in The UK, USA, Germany, France, Italy and Aistralia have not taken de Jonges line over the Pfizer and Moderna mRNA vaccines, which are currently killing more old people in care homes than the disease itself.

Ireland s also among the nations that have suspended roll out of the astra Zeneca vaccine, having made the same decision early on Sunday, after four new cases of people suffering serious blood clotting after receiving the shot were reported in Norway. Denmark stopped offering AstraZeneca vaccine jabs on Thursday after some recipients developed blood clots, and Norway followed suit.

Austria, Iceland and Italy also have postponed or restricted their rollouts of the vaccine based on the same concerns. Health authorities have pointed out that they haven’t yet established a clear link between the AstraZeneca jab and the reported medical issues that patients suffered.

As one would expect, government and Big Pharma propagandists and "scientific advisers" are playing down the reports and claiming that cases of people dying shortly after being given a COVID  vaccine are unrelated events and simply unfortunate coincidences.

WE HAD PLENTY OF WARNINGS ABOUT UNTESTED VACCINES - LINKS

Biggest Lies About COVID-19 Exposed: But Globalist Elite Will Not Let It Die
Leo Hohmann, Harbingers Daily, 9 October 2020 Since February, the U.S. media has been pounding Americans with non-stop reporting about COVID-19 coronavirus. Eight months later, the data shows everything the media said about the virus was false. Yet, those posing as “journalists” continue to repeat the lies from February and March as if they are …

No Medical Justification For Emergency Measures”
AIER reports that the following letter has made an impact on public health authorities not only in Belgium but around the world. The text could pertain to any case in which states locked down their citizens rather than allow people freedom and permit medical professionals to bear the primary job of disease mitigation.
So far it has been signed by 435 medical doctors, 1,439 medically trained health professionals, and 9,901 citizens.

You Could Be Arrested for Breaking New Coronavirus Rules, Says Boris
It is fair to say the extension of restrictions on movement and socialising announced by the government yesterday have been received with underwhelming enthusiasm by the public. Despire firgures broadcast by BBC News and other establishment propaganda parrots in mainstream media suggesting wholesale approval of the new measures, the feel one gets from internet comment threads and pub conversations suggests the opposite.


We might have said this before so as the talk of a second lockdown gets louder in mainstream media, with pseudo-scientists spewing fake statistics generated by mathematical models of reality and sanctimonious politicians bleat that their imposition of fascist control freakery on society is for ouir own good. We are told today that Coronavirus is increasing in every area of the UK ...

For every 3 COVID19 deaths lockdown may have caused 2 more – Official
The 4 month lockdown imposed by government on the advice of “scientists” while realists in the medical profession said poses almost zero risk to healthy people under the age of seventy, may have indirectly caused 16,000 excess deaths in two months, according to government analysts. This is what those medical realists, predicted at the outset.

Loughborough, Sheffield Universities shows ‘COVID deaths’ fraud
A new study by academics at the School of Business and Economics and The University of Sheffield, and economic consultants at Economic Insight, seeks to provide a more statistically robust approach to the question: “How many deaths in England and Wales are due to COVID-19?”. Currently COVID-associated deaths or excess deaths are … Continue reading

Coronavirus: Fear and Panic and a Globalist Power Grab World Leaders Insist ‘Economic Lockdowns Ravage the Very Fabric of Societies’
An impressive array of more than 500 prominent world leaders, academics, and Nobel Laureates have written “A Call to Defend Democracy” in the face of a worldwide rise in government authoritarianism during the Wuhan coronavirus pandemic. The June 25 text declares that beyond health concerns the COVID-19 pandemic is “a political crisis that threatens the future of liberal democracy.”