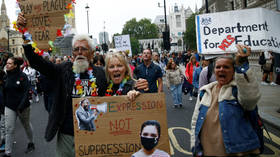 In the face of a public backlash over continuing restrictions on social activity "to stop the spread of Coronavirus" when everybody knows the vast majority of people are in no danger from the disease and in fact more are now dying due to the effects of lockdown than the virus, the government is now considering even tougher restrictions on social activity among emergency plans to respond to the alarming spread of the second wave. Measures being considered, according to a report leaked to The Times newspaper, includeda two-week shutdown of all pubs, bars and restaurants, as well as indefinite bans on inter-household socializing indoors. Meanwhile, workplaces such as shops, factories and offices would remain open. Whately neither confirmed nor denied the reports in the Times, noting that “we were looking at what we might be able to do.”

The plans have been condemed as unscientific, not backed by credible evidence and indicative of a governmnt committed to authoritarianism. Suorces within the government claim Boris Johnson is facing a rebellion from MPs and rank and file members of the party, with the Labour opposition almost invisible throughout the crisis and recently elected leader Kier Starmer, (we're not saying the man is a plank but if you drove a wooden stake through his chest he'd thing he'd had a heart transplant,) consistently calling for tougher lockdown measures and further economically damaging restrictions on business activity.

Opposition to the government’s introduction of local lockdowns and the reintroduction of social-distancing rules is growing throughoput the country. On Saturday (26 September), thousands of protestors gathered in Trafalgar Square for a ‘We Do Not Consent’ rally, which saw 16 arrested following scuffles with police. The heavy handed policing of the peaceful, lawful protest was in marked contrast to the kid gloves treatmengt haded out to ">Black Lives Matter

protests when instead of arresting people for loting and vandalism, half the Metropolitian Police Force got down on their knees and offered to suck black cock.

The government is reportedly considering the introduction of tighter social restrictions in England, as the hyping of the non existent the second wave of infections intensifies, a junior minister has admitted. The whole second wave thing is a fraud of course, the PCR test being used to test increasing numbers of people has been exposed as not - fit - for- purpose as it returns 50% false positive. With that flaw, the more people that are tested, the more positives there will inevitably be.

Speaking on Sky News, Junior Health Minister Helen Whately responded to questions concerning a ‘total social lockdown’ which had been reported in the Times earlier on Monday morning. The ‘social lockdown’ was reportedly presented to the cabinet’s Covid strategy committee last week.

The minister told a questioner “this is the moment when we have an opportunity – we have a choice for the country – to get this back under control.” (which is bollocks, lockdown has failed before, what logic is there in assuming it will succeed now?) Whately also said the government did not want to introduce further restrictions but would be keeping an eye on Covid spread rates across the UK and would act accordingly. The UK has seen a substantial rise in cases over the last fortnight, with 5,693 new cases reported on Sunday; many of the most affected areas are already in a localised lockdown.