Just as was predicted, based on the fact that accusations came from high-ranking people in the US Democratic Party, House Intelligence Committee Chairman Devin Nunes confirmed on Sunday that no evidence of collusion between President Trump's campaign and Russia has been forthcoming from members of the Democrat National Committee (DNC) or members of Hillary Clinton's campaign team. Likewise, mainstream media organisations such as CNN, the New York Times and The Washington Post have offered nothing to back up reports of links between the Trump campaign and The Kremlin. 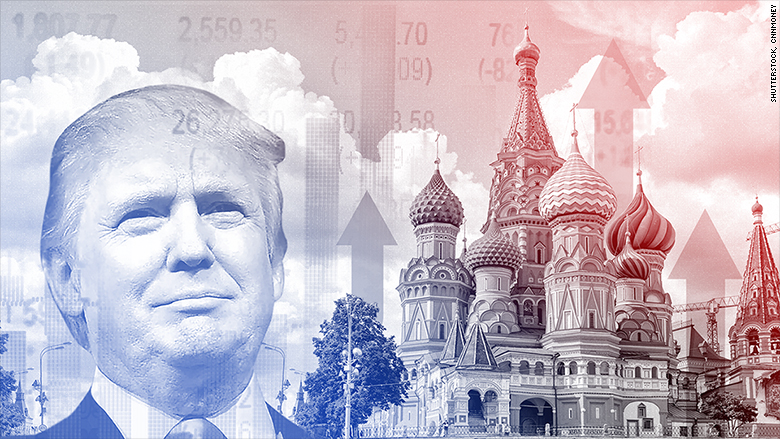 Apicture of Trump and Russia just to piss off the hate mob who call themselves liberals (image source)
Maverick journalist Glenn Greenwald, who left a lucrative career with liberal media publications to form The Intercept and do the job political journalists should to by calling the powerful to account sums up the farce well, given the way these Russia conspiracies have drowned out other critical issues being virtually ignored under the Trump presidency, it’s vital that everything be done now to make clear what is based in evidence and what is based in partisan delusions. And most of what the Democratic base has been fed for the last six months by their unhinged stable of media, online, and party leaders has decisively fallen some way short of the truth or even a distant relative of the truth. Greenwald writes:

From MSNBC politics shows to town hall meetings across the country, the overarching issue for the Democratic Party’s base since Trump’s victory has been Russia, often suffocating attention for other issues. This fixation has persisted even though it has no chance to sink the Trump presidency unless it is proven that high levels of the Trump campaign actively colluded with the Kremlin to manipulate the outcome of the U.S. election — a claim for which absolutely no evidence has thus far been presented.

The principal problem for Democrats is that so many media figures and online charlatans are personally benefiting from feeding the base increasingly unhinged, fact-free conspiracies — just as right-wing media polemicists did after both Bill Clinton and Obama were elected — that there are now millions of partisan soldiers absolutely convinced of a Trump/Russia conspiracy for which, at least as of now, there is no evidence. And they are all waiting for the day, which they regard as inevitable and imminent, when this theory will be proven and Trump will be removed.

Donald Trump's presidency is proving quite odd in many ways and a lot of this is due to Trump's eccentric style of doing politics. But a break from the old 'playground squabble' standard of debate in which personalities dominated because both sides offered almost identical policies (defined for them by vested interests,) is what Americans voted for and if The Democrats want to effectively oppose Trump, rather than whining because he once said 'pussy' or screaming that he should be impeached because he is a Russian agent, they have to remove the Washington establishment old guard, The Clintons, Obama, Pelosi, Warren etc. and bring in some people who are able to understand the concerns of the majority of working Americans and drop the politically correct bullshit.

Yes, the Panama Papers Could Really End Hillary Clinton’s Campaign
We've been chronicling the downfall of Hillary Clinton, from her seemingly unassailable position as the anointed successor to Barack Obama, whose path to first the Democratic Party nomination and then the Presidency itself had been carefully planned and all obstacles removed. The fixers and deal makers had reckoned without two factors however, Bernie Sanders and Mrs. Clinton's poor image with voters, a result of her spoiled little rich girl arrogance and the incompetence she showed in office as Secretary of State.
Wikileaks Drops Hillary Email Bomb That Could End Her Campaign but FB Censored It
Servergate: Hillary Clinton, Arrogant, Ignorant or both?
Servergate: 'Immune' Hillary IT-Staffer Reportedly A "Devastating Witness" - FBI
Undemocratic Democrats – Nearly 10% Of Democratic Party Superdelegates Are Corporate Lobbyists
Hillary Should Be Terrified After Judge Grants Staffer Immunity On Email Scandal
More Evidence That Hillary Clinton Leaked Secrets damaging To The USA
Political Analyst: Hillary Clinton Will Be Indicted
America leadership fail
American paranoia
Trump for US of America?

You’ll be surprised to learn everybody in America does not hate Trump
Trump Threatens To Pull U.C. Berkeley Funds After Violent Protesters Cancel Yiannopoulos Speech
The Folly Of women Against Trump Protests
This Says It All About Trump And The Triggered Liberals
US Democrats Self Pity Proves Neitzsche’s Point About The Abyss
Democrats ‘Russia Hacked Us’ and Failed Recount Campaign is Political Suicide
Snowden Mocks Claims That Russia Hacked The Democrats Campaign Computer System
US Democratic Party Primaries Vote Rigging Whistleblower Found Murdered
A Song Of Servitude
Armageddon
The Polarisation Of Society: Captive Minds And Intellectual Cowardice

Donald Trump Loses Fight Against Scottish Wind Farm It will be interesting to see how many fart related jokes we can link to Donald Trump's name between now and when his campaign fails.

Living With The Conspiracy