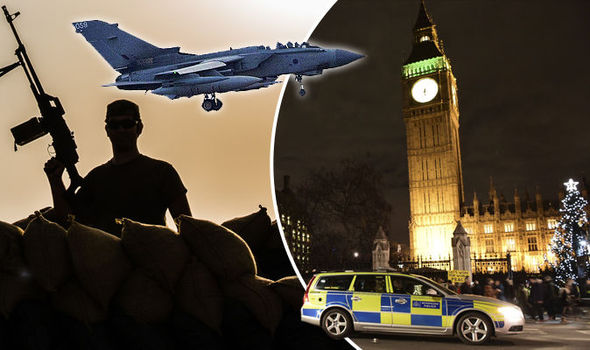 London next to face terrorist attack? (Image source)
As the UK Parliament debates the case for joining the combined effort to bomb ISIS aka Islamic State, aka Daesh into oblivion in Syria (and what a farcical craptangle that debate is turning into), we learn that yesterday (Dec 1) US Defense Secretary Ashton Carter said the US Government was preparing to expand the role of special operations troops fighting Islamic State jihadists in Syria.

"American special operators bring a unique suite of capabilities that make them force multipliers," Carter told the House Armed Services Committee. "Where we find further opportunity to leverage such capability, we are prepared to expand it."

The United States has already announced it is sending about 50 special operations troops into Syria.
In an interview shown on UK Television yesterday, Syria's leader Bashar Al Assad said the efforts of the US lead coalition against ISIS had been totally ineffectual over eighteen months and only intervention by Russia had stopped the advance of the Islamic State guerillas.

So as for US forces being 'a multiplier, if you multiply anything by zero the product is zero.

The conflict in Syria, which started in 2011, as a knock on effect of 'The Arab Spring', the upsurge of Islamic fanaticism that grew in the wake of an idiotic speech made in Cairo by Barack Hussein Obama in which he somehow managed to give the impression that his administration would support every gang of insaniacs, nuttters, malcontents and opportunists that took up arms against tyrannical legitimate governments.

As things turned out, Obama's support was only forthcoming in support of those fighting against tyrants Washington did not like or who had obstructed US moves to further it's geoplitical ambitions.

And so we lurch towards global war, the west's leaders having proved they are just as insane as the tyrants their doomed middle east wars have ben waged against (some might say the Libya conflict succeeded in overthrowing Gadaffi, but killing a man who for all his faults kept a brutal kind of order, to leave a chaotic failed state with three governments fighting over their claims for legitimacy is hardly success.

The joint presser hosted by France's President Hollande and Barack Obama at the White House (Nov. 24), apart from an Vaudeville worthy melodramatic denunciation of ISIS, was notable only the French president’s sudden obsession with overthrowing Syrian President Bashar al-Assad. This was made even more bizarre because immediately after the Paris terrorist atrocity the french President concluded a Washinton off-pissing cooperation deal with Russia's Vladimir Putin who, while ruthlessly attacking IS is adamant that Russia's ally Assad must stay in power.

We should be quite clear, all the bluster from Western leaders about a Syrian political “transition” to a pluralist democracy or demands that Assad must go, indicate that far from uniting with Russia and Iran against Sunni fanaticism in Iraq, Syria and Kurdistan, the west's priority is Washington's priority: to depose Assad thus clearing the way for an overland pipeline from The Gulf to oil terminals in that panhandle of Turkish territory that dangles down the eastern coast of the Mediterranean sea.

Hollande in Washington entered the same cloud cuckoo land inhabited by Bush and Blair when the US/UK alliance the 9/11 attacks on New York and Washington (and as we now know, 'sexed up' dossiers on saddam Hussein's military capabilities to justify invading Iraq, claiming the only way to defeat the religious fanatics of Al Qaeda was to invade the secular state of Iraq. In the same way, deposing the secular regime of Assad, the main military opponent facing ISIS, would be as monumentally idiotic as pretending that bombing Saddam's crazy but secular regime in Iraq would neutralise the religious fantatics of Al Qaeda.

That a political solution in syria can only be achieved following the overthrow of Assad is the official policy of the United States, France, the UK, the European Union's unelected bureaucrats, NATO and the other Western powers. Having hyped the threat of jihadist terrorism (a which itself resulted from the West’s earlier military interventions), the great and good of western politics and NATO governments now plan to resurgent Islamic fanaticism by overthrowing one of the last three secular regimes in the Middle East (the others, Jordan and Kuwait, being hardly relevant), where Christians and other religious minorities have been protected. Overthowing Assad we must remember, would leave Syria's Shia Muslims and Syriac Christians to the tender mercies of the Allah loving head amputators.

Bashar al-Assad is likely a gangster, (as our recent reports here have shown Turkey's Recep Edrogan, feted by the west, to be). But when has that ever been a characteristic disqualifying one to be a partner of the United States government? Sisi of Egypt, Erdogan (sic), and the bloodstained tyrants who run Saudi Arabia , Qatar and Nazarbayev of Khazakstan are all members in good standing of the Washington Global Government Consensus. If Assad has signed his death warrant, it is because of his failure to join that consensus, rather than because of the way he runs Syria. After all, he isn't as bad as other US suppored tyrants such as President Nazarbayev of Khazakstan, or Avazov of Uzbekistan who is in good stead with Washington despite being said to have his opponents boiled alive for the entertainment of his supporters and a warning to those thinking og speaking against him. Obviously it is not a country's actual human rights record that incurs the wrath of western leaders, but refusal to bow to Washington / UN dictum.

Not only have Hypocrite David Cameron's government been caught out giving technical support to the appalling Saudi Arabian regime of head amputators, The House Of Saud, they are very eager to sell armaments to the regimes which violates human rights in ways even Pol Pot could not imagine.

Reports have reached us that the USA is turning on its supposed allies in the Syria conflict. The Fars News Agency (FNA) reports: "In an incident similar to several we have reported in the past, unmanned US drones attacked the Jund al-Imam Battalion popular forces' headquarters at Speicher base in Tikrit," Spokesman for Asaeb Ahl Al-Haq Battalion (one of the popular groups fighting alongside the Iraqi army against the ISIL) Naeim al-Aboudi said on Sunday

Is The World Turning Against The New World Order Elitists
2015 looked like being a good year for the 'New World Order', the year the banksters and international psychopaths succeeded in provoking a global conflict as the final step to the establishment of a global government. Thanks largely to Vladimir Putin, and in a small part to the incessant questioning by new media we know know which NATO country has been acting as middle man for the powers that sponsor regime change, where the money that keeps the ISIS show on the road is coming from, and who our real enemies are ...