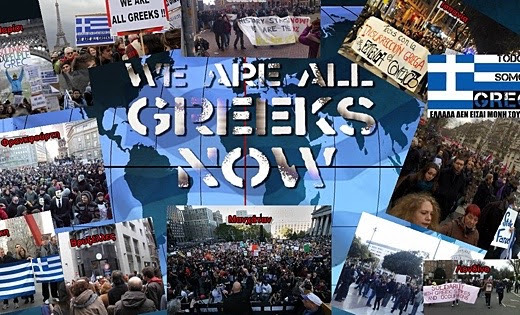 December, and as we brace ourselves for another slew of depressing economic figures it is understandable that consumers aren't spending.

Economists and business people describe national economies as being in one of two states, growth or recession (they never mention the S word of course - stagnation). What state the economy is decided by taking the sum total of certain types of transactions (selected by statisticians) and then deflating this total by a rate of inflation also devised by statisticians and not representative of the essential spending of ordinary people, but of the political interests of whoever is paying the statisticians. A nominal figure for gross domestic product is thus created, adjusted to take account of inconvenient factors like reality, and termed real GDP.

The fist thing to understand about GDP is that it does not measure the health of an economy but only the rate of churn of money within that economy. For example if a government allows one million migrants into the country and pays them £300 a week each, and these immigrants spend their benefits on food, housing, clothes, transport, a little entertainment and a few other things, GDP is increased by £300 million a week, and hey! The case for immigration benefitting the economy is made.

Another GDP scam understate the rate of price inflation, thus showing growth in GDP where in real terms there has been contraction. If GDP grows year on year by less than the rate of price inflation, in real terms the economy has contracted. More paper money has been spent but less goods and services have been paid for. From the inflation scam it only takes a small leap of flawed logic to associate rising prices with an increase in economic activity (i.e. to show more money has moved when we should be looking at the fact that less trade has been done. It also follows, based on the fallacious assumptions of GDP economics, that falling prices are to be avoided at all costs.

Assumptions and statistics. All statistics are based on assumptions and they lead to ridiculous conclusions. As Socrates said 2500 years ago, if we keep questioning in the end we come to the assumption or fallacy all established truths are founded on

The received wisdom that falling prices are bad for business is being questioned by some economists who have at last woken up to the fact that a dip recession is in fact a depression. The improvement in everyone's standard of living through falling prices for communications, access to data, and the technology in our homes and everyday life could not possibly have happened, the glass is half full merchants chirrup. Here the fallacy stands out like a sore thumb, obviously if only half the glass is full, the other half is empty. For those in work whose earnings have kept pace with or moved ahead of inflation falling prices have been good, they can afford to fill the empty half of their glass. But what of those whose incomes have dropped. Or those formerly affluent people whose jobs have been offshored or taken over by robots. Falling prices, or rather the conditions that have caused prices to fall have not improved their lot.

It does not end there of course, as deflation bites because profits are being squeezed and tax revenues are falling, employment falls further, people in work cut back more, not knowing when they will be hit and unemployment rises. Then taxes must rise more to cover the increased welfare bill and people in work have less spare cash to spend. And so it goes on with that glass looking more empty than full all the time.

And spare a thought for the prostitutes in Greece who due to a glut on the supply side as women are forced to sell themselves to feed their families, and falling demand, are only able to charge €5 for half an hour.

If rising prices are good for the economy, as one school of economics tells us, how come everyone was so unhappy in Germany's Weimar Republic in 1923, or in Zimbabwe fifteen years ago? Surely, as inflation accelerates the happiness level should rise. Conversely as prices fall and consumer goods become cheaper, people's living standards improve and they should become happier. So how come wherever I look, it's only children and retired people with good pensions like myself who are happy.


Dark clouds of retribution are gathering over the hubris of economic optimism
If we listen to economically illiterate idiots like Barack Obama, George Osborne, Paul Krugman and the EU leaders Jean Claude Drunkard, Gauleiter Martin Schulz and Herman Van Rumpy Pumpy we might get swept up in the belief that global economic recovery is surging ahead. The statistics they recite suggest so. Unfortunately statistics are easily manipulated. The views of people who actually run businesses tell a different story.


Things That Make You Boggle ... Like The Misplaced Confidence Of Academics

Why are economics academics always so sure that their predictions are correct. Given the abysmal record on economists on calling the economic trends correctly even after they have happened let alone ahead of the trend, you would think exponsents of the dismal science would be a little more cautious in proclaiming their gusses as evidence backed facts. They never seen to learn however.

IMF Chief Legarde Arrested? It's DSKja vu All Over Again.

Like her predecessor in the job, Domique Strauss - Khan, IMF Chief Christine Legarde feaces prosecution for criminality and is likely to be forced out of the job. Yet the dodgy episodes in Legarde's past were well known before she was appointed head of the IMF. So who put the kinfe in and why?

Deficit Spending: The Numbers, The Reckoning and The Reality Deniers.

As the arguments rage over whether we should steam ahead with punlic spending increases and printing money thus inflating away debt to end the finacial crisis and in the process destroting savings, or go for the austerity and reducing the rate of increase in the deficit, the reality looks more threatening all the time.


Financial Crisis? The Dow Has Already Fallen More Than 1000 Points From The Peak Of The Market

The dramatic falls in world wide stock markets over the past week hows that the Daily Stirrer finance expert was correct in predicting this, such recovery in the global economy as has happened since 2008 has been the result of printing money and manipulating the markets. This latest action is part of a massive heist by the bankers to drain the value from our savings and pensions

About six months ago a paphlet bearing the title Guilty Men was published. As well as predicting just where the European Single Currency system was heading it identified the financiers, politicians and propagandists who had advocated the creation of the European single currency 15 years ago, and exposed the dishonest or even brutal methods they used to bring about this giant step towards unting the diverse nations and cultures of the European continent under a single ...

UN Panel Says Redesign The World Economy For SustainabilityPoliticians can phrase their press communiques in fine words and soaring rhetoric but in the end they cannot disguise the fact that their latest initiatives on saving civilizartion are just another thinly disguised move towards global government, a global economy and culture the suppression of the individual and a New World Order.