In my wanderings around the web today I came across a post questioning why the US military for all its technical superiority did not simply wipe our ISIS and the Russian and Iranian forces in Syria, disposing of Assad in the process.
The website attracts a predominantly conservative audience so responses in the comment thread were full of Gung ho claims about American exceptionalism and the superiority of American trained soldiers(I wonder what the Vietnamese or Afghanistan's Taliban guerillas might have to say about that?). Most however reached the right conclusion for the wrong reasons. The USA does not want to defeat ISIS (correct) The USA could obliterate Russian and Chinese forces supporting Assad. (WRONG!) 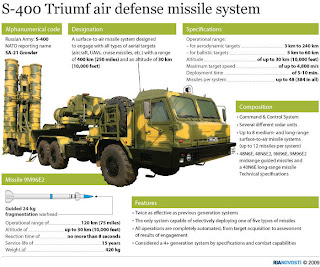 S400 (Growler) Surface to air missile system (Image source - click for enlarged view with readable size text)
As tensions increased in the region after warplanes of NATO member Turkey shot down a Russian SU24 bomber and then anti - Assad rebels supported by the USA destroyed a rescue helicopter sent to find the pilots (one of whom had been machine gunned by rebels while parachuting to safety) The Kremlin ordered its S400 (Growler) Surface to Air missile system, far more advanced that anything the US Army has, to be deployed in areas where US and Russian operations are likely to overlap.

It is already known that Pentagon officials have been shocked by the capabilities of Russia's most advanced aircraft, the SU34 and by the advanced technology used in weaponry of Russian naval vessels now guarding the approaches to Syria's coast. Warnings from US Generals that Russia would obliterate America's forces in any large scale conflict may have been overstated but they were perhaps intended to deflate overconfidence with is typical of the Washington wusses for whom it is easy to be brave as they sit in offices thousands of miles from the combat zones.

Any shooting war would not be as one sided as many American gun nuts think. And that was before China, an ally of Moscow that has promised military support should conflict break out, revealed THIS:

A [Chinsese] advanced aircraft, known as the Wu-14 travels between Mach 5 and Mach 10 which is somewhere in the vicinity of 3500 and 7400 Mph. Sources say the hypersonic vehicle can travel up to 9,000 Mph! This means circling the Earth in 2.5 hours. At this speed, the vehicle can out maneuver any missile system currently active.

If the vehicle was launched from a sub or aircraft carrier in one of the oceans, then a strike to nearly any country would happen in just a couple of minutes.

The WU-14 “threatens to neutralize US strategic missile defenses with the unique capability of flying at ultra-high speeds and maneuvering to avoid detection and tracking by radar and missile defense interceptors.”


Sorry America, I love your country, I really do (well my Grandad Thorpe was born in Utica NYS) but some of you need to get a firmer grip on reality.
Posted by Boggart Blogger at 9:38 AM