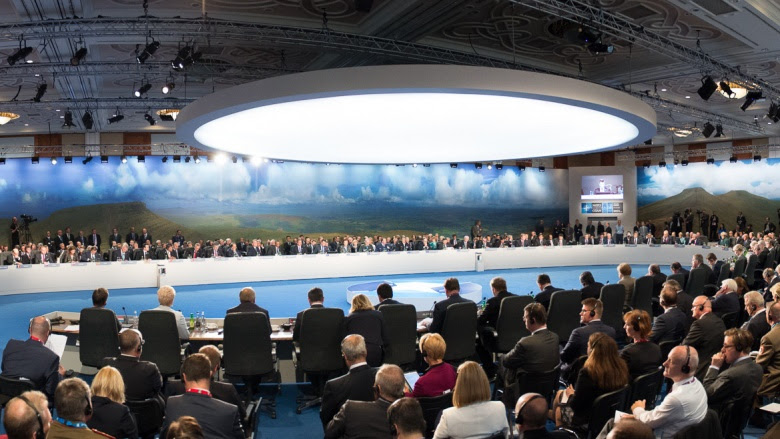 NATO bosses (meeting to discuss how to provoke Russia even more (Picture: Wikimedia Commons)
Earlier it was reported in the news feeds that in response to the escalation in the Syria proxy war, where German warplanes have now arrived to join the bombing campaign against ISIS, thus adding to the list of European nations already infilitrated by Muslim extremists among the millions of illegal immigrants that have flooded into Europe with the tacit approval of EU and national leaders and thus likely to be hit by terrorist attacks similar to those that shocked Paris in November 2015.

We reported yesterday that the US led coalition is planning to put troops from Turkey, Saudi Arabia and other Sunni Muslim nations into Syria in pursuit of Obama's main goal, which is the removal of Assad rather than the eradication of the ISIS terrorist threat. In response Putin issued one simple command: "I order to act extremely tough. Any targets that threaten Russian forces or our infrastructure on the ground should be immediately destroyed."

However, Syria was a secondary topic in Kremlin discussions yesterday when Putin told his his defense chiefs "to strengthen Russia’s strategic nuclear forces amid rising tensions with the U.S. over the global balance of power."

Bloomberg reported that Putin told the assembled military chiefs "new weapons should go to all parts of the nuclear triad of air, sea, and land forces. Action must also be taken to improve the effectiveness of missile-attack warning systems and aerospace defense."

According to Russia's Defense Minister Sergei Shoigu, Russia’s military will have five new nuclear regiments equipped with advanced missile complexes next year, adding that more than 95% of the country’s nuclear forces are at a permanent state of readiness".

It is known that around 56 percent of Russian nuclear weapons are new. These include modern missiles, upgraded aircraft and a strengthened submarine capacity, according to Shoigu. Russia has also increased the military’s combat capabilities by reinforcing its western and south-western army groups and building four bases in the Arctic region, he said.

Just in case there was any doubt before, it is now clear that the nuclear arms race and the cold war are not only back, but in this era of "hackers" the probability of an unauthorised launch, is so much higher that last time.

That Putin has chosen to highlight Russia's nuclear strength just days after NATO's most recent European expansion is hardly surprising. However the sabre rattling is not all on the Russian side. Bloomberg noted in the report linked above, "Putin’s moves to reinforce Russian nuclear capabilities are reviving Cold War tensions with the U.S. and its allies in the North Atlantic Treaty Organization".
It is also worth reminding people that as has been widely reported here ans elsewhere, US efforts against ISIS have been less than wholehearted (and another view on this aspect of the bigger story here ), because the terror group has been funded, armed and trained by US allies Turkey, Saudi Arabia and Qatar and is also supported by the USA itself as ISIS offers the best hope of defeating Assad that does not involve US forces in direct confrontation with the Russian military.


The U.S. warned in June that the Kremlin’s "nuclear saber-rattling" is undermining stability in an attempt to intimidate European neighbors." Against that, we have reported here as have many blogs and news websites, and even some mainstream media news publisher, that moves by NATO and the EU, in violation of a 1991 treaty, to suck former Soviet Republics such as Georgia, Lithuania and Ukraine into their western blog organisations were never going to be meekly tolerated by Russia.

And when we get down to that level we have greater understanding of at least some of the reasons why the proxy war in Syria has become a real and present danger to the entire world. And yet some people are still afraid that a little extra Carbon Dioxide in the air is the greatest threat.

Call The Hackers: US Superplane Grounded By Software Bug
... it was reported late last year during a particularly intense moment in US / Russian relations in the middle east that Pentagon officials had warned Obama not to risk triggering any direct conflict with Russia because the Russians could "obliterate US military capablities."


ISIS Oil expose "Raqqa's Rockefellers", Bilal Erdogan, KRG Crude, And The Israel Connection
More on how the USA and its allies Israel and Turkey have been central to the criminal business of stealing oil from wells rightflly owned by Iraq and the autonomous Kurdish region and laundering it through Turkey into western markets and how the Turkish President Recep Edrogan is making hundreds of millions of dollars from the trade.

To Join Obama's Proxy War Against Russia In Syria Would Be Cameron's Greatest Folly
A look at our prospects should twat - boy Cameron succeed in obtaining parliament's approval for his wish to join Obama's coalition ofg dodgy political opportunists in their attempt to overthrow Syria's President Assad. Given that Putin has said many times, Assad stays, our outdated war planes don't stand an ice cube in hell's chance against Russian S34s and Growler Surface to Air missiules (SAMs). And that's without factoring in China's pledge to support it's allies Putin and Assad.

ISIS: Know Your Enemy - Who Of Those We Think Are On Our Side Is Helping ISIS
Here at last is the story behind the shooting down of a Russian military jet by Turkey's air force. It will also answer questions about how ISIS can afford all those Toyota pick up trucks, but it is not pleasant reading for people in the west who just want to hear that the good guys are winning

World war 3 ISIS and Turkey is the problem Russia will blow them up
Turkey is a rogue state, Washington and NATO must have known Edrogan was dealing oil and brokering weapons and ammo for ISIS for a long time. Whatever Russia does is justified.

Russian Pilots shot By Syrian Rebels While Parachuting To Safety
Hot news from the middle east all day today, it looks like what we all feared is about to happen as Turkish and Russian warplanes clash, with Turkey shooting down a Russian fighter and then a gang of insane religious fantatics (or moderate Syrian rebels as Barack Obama calls them) shoot down the helicopter Russian officers sent to rescue their downed planes crew.

France is trying to create a coalition to destroy Isil, but President Obama isn't interested
With France leading Europe into a coalition with Russia against Islamic State, and Chia also giving its support to the struggle against Islamic extremism, why is Barack Hussein Obama still pussyfooting around and talking about the need to support moderate anti - Assad groups? Could it be his Saudi puppet masters agenda of overthrowing Assad is more important to him.

U.S. Government Moves To Exploit Paris Terror Attacks To Abolish Privacy
Never ones to miss an opportunity to advance their fascistic agenda, the US government is trying to exploit fears generated by the Paris Muslim terror attacks.

Putin Lines Up The Big Guns As Obama 'Shoots Golf' And Kerry Vacillates
Things are getting serious (and very dangerous) in Syria. ISIS do not have warplanea and SAMs are not effective against ground troops so this latest Russian move can only be interpreted as a warning to the USA