The Boggart Wades In To The Abortion Debate 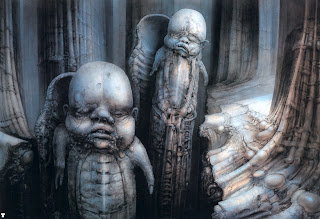 Equitiquas by h R Geiger. Geigers nightmarish images at time convey perfectly the conveyor belt womb of poor women down the ages as they fell pregnant every year, most of their pregnancies not going to full term, and of those that did the new life ended in infant death as many times as the child survived to adulthood. Herbal contraceptives, not as efficient as modern methods, but much better than nothing, were always available to those wealthy enough to buy indulgences against the strictures of the church.
Expect a headbutt of an article when you visit Abortion - Pro Life equals Pro Death . Boggart Blogger Ian does not mince words in his attack on moves in the US to make all abortion illegal.
Strong stuff here, arguing for an enlightened approach to the difficult question of abortion and steering a course between the extreme views of both the pro - life and the pro - choice factions.

While the position of no terminations at all, even in the case of medical emergencies is clearly untenable, those advocation that termination of a pregnancy should be available on demand right up until the mother goes into labour is just insane but even that does not go far enough for some liberals who have campaigned for post - birth abortions.

A Brief History Of Contraception And Abortion (Part 1)

A Brief History Of Contraception And Abortion (Part 2)

A Brief History Of Contraception And Abortion (Part 3)

A Brief History Of Contraception And Abortion (Part 4)