"Don't Be Evil" - Unless There's Money In It For Google 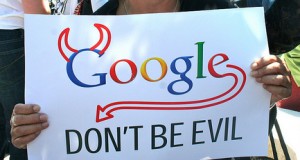 One problem with geeks is their tendency to leap in the air and clap their hands when any new technology is announced. Another problem is that given the slightest scent of power they go off on a world domination trip. The guys at Apple have tried it as have the Microsoft people, Adobe, Oracle and Cisco all tried it in their own modest way and many others have tried too. “Hey, the world will be a much better place if everybody abandons independent though and buys one of my widgets,” goes the pitch. But a computer, a web browser, an i-Pod and a web-cam are no substitute for a life.

This does not discourage the nerds of course and now we have the inventors of Google trying to jackboot their technology into every aspect of our lives. OK the metaphor might be distasteful but don’t forget, Hitler was a nerd.
With “Don’t Be Evil” as their slogan from day one Google managed to ooze into the public consciousness as nice chaps who only wanted to help us get better results from our web searches. It was so easy to miss the fact that they were totally focused on the aim of making technology in general and their technology in particular our master and so they are not capable of being anything but evil. And addiction to the web is causing us to help them every step of the way. You should pay more attention when you watch Austin Powers movies.

The first question we should all ask ourselves is “how good is this technology really?”

Back in 2001, just as Google was attracting effusive praise from industry pundits for the way it was elbowing aside other search engines that used different criteria for rating pages by relevance rather than the number of other pages linking in to them, I recall one maverick, an Information Technology veteran of twenty – five years experience saying in his weekly radio slot “Google is the worst search engine possible – except for all the others. The obvious problem was that people were being impressed by sheer numbers of search results and forgetting quality. To reaffirm this for the current article I ran a search on P.C. Plus, a well known UK mag. Google gave me 900,000 search results; one of its rivals that uses similar technology gave 950,000 (figures rounded).

Because on the Google search the PC Plus homepage came at the top of the list Google might use that as proof of their efficiency. But on Google the top link was trying to sell me PC Plus, the next twenty were advertisers in PC Plus trying to sell me other stuff. One way or another the owners of these pages had paid money for their high position in the listing. On the rival search engine I found information telling me what kind of readers might choose PC Plus and what other mags covered the same ground. I do not consider an advert can ever be as relevant as an impartial review. Google is therefore not about “not being evil” but making money. And the company is making money – sort of. Ad-words mini adverts that appear alongside search results and ad-wise targeted ads that appear on web pages are pulling in a very respectable revenue stream.

Most business ventures that depended on the web for revenue generation have so far been abject failures (Amazon being the most outstanding exception) and yet the slightest hint of possible future success is enough to ignite the same kind of hysteria as fuelled the dotcom bubble.

Google went to the stock market and was rejected because their figures did not add up. They then decided to directly market their own shares and despite warnings from banks and experienced dealers, since their launch stock in the big G has gone through the roof. The financial warnings were based on the fact that Google’s initial share offer was overpriced. Even the most optimistic projections showed the shares would take around two hundred years to repay the capital investment. At the present trading price that is closer to a thousand years. The “don’t be evil” boys didn’t pay a penny for their shares of course and are currently worth around $10 billion each. “Don’t be evil” unless there is serious money in it perhaps?

Another problem is emerging for Google through its method of gathering revenue. This is “click fraud.” At its most basic click fraud involves people visiting their own sites and clicking on the Google ads, so that they and Google earn a few cents for the referral. The flaw in the Ad-wise business strategy then is that it provides an easy way for the greedy to render it totally ineffective as an advertising medium as there is no chance of a sale resulting from the vast majority of referrals. When the simplicity of automating these fraudulent clicks is considered it quickly becomes clear that advertisers are not getting much for their money.

Like the lead character in a Shakespearean tragedy, the seeds of Google’s downfall are sown in the flaws in its own character. The people behind the company have built much on the fact that Google is cool. Now the idea that technology can be cool may have some currency among the nerdier students in the world of further education but “cool” is a quality always in thrall to fads. And a new generation of nerds may easily latch on to a new fad.

At the heart of the Google technology is the Page Rank algorithm which as already mentioned is determined by links. When, sometime in the next month, Google gets round to indexing this article it will pick up on the phrase “Shakespearean Tragedy” because a lot of pages already contain that phrase, even though my article is of no interest to fans of Shakespearean Tragedy. Thus Shakespeare readers, irritated by the bizarre results their Google searches throw up (!!!) will start looking around for a way to search the web that is relevant to their interests. Such search technology is already well along the development path.

The continuing success of Google really depends on our willingness to delegate all our personal decision making to a piece of computer software. If we can be persuaded to do that however, current development projects which would put Google in a position to destroy the publishing, newspaper, T.V., movie and music industries and replacing their products with an infinite stream of dross. Anyone in doubt about this only needs to take a look at Google Video. Can one company be allowed to weild so much power?

Finally there are the privacy issues some of Google’s business methods raise. Side-stepping those extremist lobby groups who praise the heroism of resisting the U.S. Government’s reasonable requests for access to databases we ought to be questioning why Google think they have a right to gather and store information on all of us who use the search engine. While the United States Government (and European Governments on this side of the Atlantic pond) only desire to identify web users whose use is connected with pornography that involves criminal atcs (child abuse, violent sex, torture, rape etc.); fraud and terrorism and not the pattern of web use by individuals (Governments can already track us as individuals without our knowledge) Google is busy building a profile on each one of us in order that they may better target us with advertising material. That in itself poses a far greater threat to the privacy of anybody who is not a sex criminal, fraudster or terrorist.

The whole business model is built on unproven and very inefficient forms of advertising and the only way to make those ads more cost effective is to identify the users who are likely to respond. So if you use G-mail, your messages are scanned, keywords extracted from what you say to your friends and the information added to both your Google profiles. Thus you can be targeted for a constant stream of unsolicited ads.

For similar reasons your searches are stored and may be kept indefinitely. It is known also that systems are being created to search your desktop and suck up information to the great database.

And people think this organisation is cool.

Web addicts of course are always ready to believe the latest Geek Mythology. The business community is more hard headed however and last week’s near 10% drop in Google share prices should have sent warnings around the world. The Google people may still say “don’t be evil” but in the cloud – cuckoo land they inhabit how can evil be defined in a way relevant to any kind of reality.

Little Nicky Machiavelli thinks they do. Check out what he has to say on the subject at Machiavelli: Don't Be Evil - unless its for money
Posted by Boggart Blogger at 8:57 AM No comments: