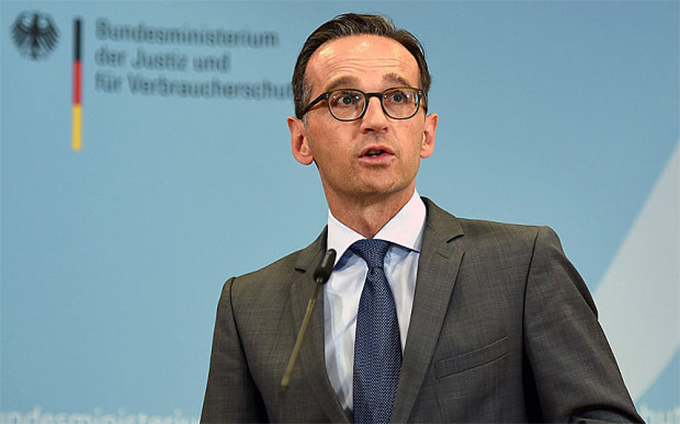 Herr Maas does not look like a fascist bastard, but neither did Hitler (image source)
A German politician has given the clearest indication yet that the political elites of the free world are ideologically much closer to Adolf Hitler's National Socialists than the social liberalism they claim to support. Free speech is the basis of all liberal democracy, without free speech we live under the heel of tyrants.

Heiko Maas, the German justice minister has called on social networking website Facebook to remove “xenophobic and racist” anti-migrant posts from its website and apps., has written to the company to demand an urgent review of its policy over hate messages.

Predictably Herr Maas has been rather vague in defining what exactly he means by hate messages, might this be because his real aim is to suppress discussion of ideas and perspectives on current affairs that do not conform to the government / EU bureaucratic dictatorship approved propaganda? And if that is the case (and we will know it is if Herr Maas or one of his staff does not post a denial in the comment thread) isn't it identical to the line taken by the National Socialists back in the 1930s?

Maas tried to justify his attack on free speech by saying, "Photos of certain body parts are automatically deleted because of moral concerns, yet racist and xenophobic statements aren’t immediately removed. "

He requested the internet data theft corporation to send a senior representative for talks at the ministry on September 14. Facebook responded swiftly, agreeing to the talks and issuing a statement condemning xenophobic posts. The moon faced little Nazi shit Zuckerberg (yeah I know he's Jewish, Zionists were the first Nazis,) will no doubt agree to the demand because like all internet billionaires he is a total control freak and has no ethical awareness at all.


We can't see any similarity between posting a reasoned argument in support of stronger immigration controls and posting a picture of your boyfriend's dick or girlfriend's minge in a public forum. But we can see a strong similarity between the kind of censorship Maas wants and the censorship practiced by Hitler's Gestapo, Stalin's Politbureau, Mao's Red Guard and the political thought police of any other brutal tyranny for the purpose of suppressing dissent.

The German minister’s intervention comes amid a spate of violent anti-migrant protests in Germany that have seen more than 30 police officers injured and several refugee shelters torched in arson attacks.

“There must be no mistaken tolerance for users who offensively preach xenophobia and racism,” Mr Maas wrote.

He said he had decided to take action after numerous German Facebook users complained to the ministry that xenophobic posts weren’t deleted even after they were flagged as inappropriate.

“Such statements regularly amount to criminal offences, in particular the incitement of hatred, and may amount to public provocation to commit crimes,” the minister wrote.

Perhaps if Herr Microwurst and his equally limp dicked colleagues in Germany's authoritarian government had listened to the voices of the people they were ELECTED TO REPRESENT, instead of behaving like a bunch of medieval aristocrats, German society would not now be sliding towards civil unrest.


The Importance Of Free Speech

Threat to the Free Press