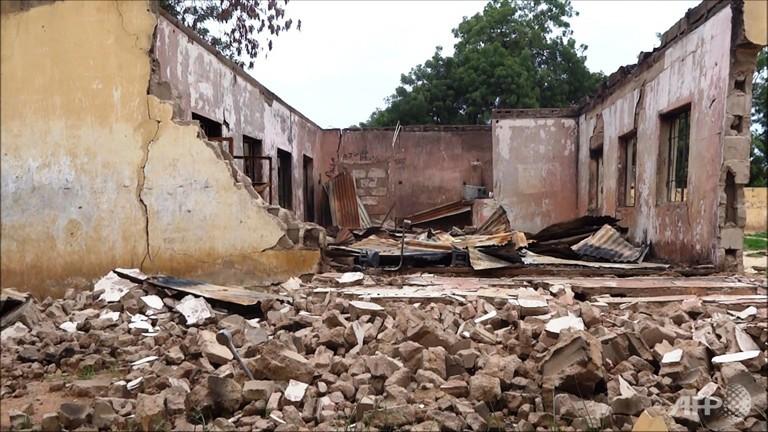 We have not heard much of Boko Haram, the Islamic extremist group operating in Nigeria and neighboring countries Niger, Chad and Mali for a while, most news has been dominated by Syria and the middle east, and and there are neither enough time nor enough resources to report or discuss everything that happens in the world, especially for a little club for old guys who still believe there is more to life than sitting around playing dominoes which is what The Daily Stirrer is.

This lack of reporting however has led to some people, mostly the ill informed but in some cases the delusional to believe Nigeria's new Muslim dominated government has defeated the extremists (see story above). In fact Boko Haram are stronger than ever in northern Nigeria, the area where their strength always lay. Their attacks throughout the year have forced more than 1 million children out of school, heightening the risk they will be abused, abducted or recruited by armed groups, the United Nations children’s agency stated in a press release (Tuesday 22-Dec-15).

(Sarcasm alert: heave sarcasm indulged in at the end of the article)

The conflict has forced the closure of over than 2,000 schools in Nigeria, Cameroon, Chad and Niger, the agency said. Some have been looted or set on fire by the insurgent group whose name means “Western education is sinful.”

“The conflict has been a huge blow for education in the region, and violence has kept many children out of the classroom for more than a year, putting them at risk of dropping out of school altogether,” said Manuel Fontaine, UNICEF’s West and Central Africa Regional Director. "Before the crisis, an estimated 11 million children of primary school age were already out of school in the four neighboring countries where Boko Haram stages attacks," he added.

Schools in northeastern Nigeria are reopening, but many classes are overcrowded or the buildings are being used as refuges for people displaced by the conflict. Fear of reprisals is also preventing teachers from going back to classes. About 600 teachers have been killed during Boko Haram’s six-year insurgency, according to the press release.

“The challenge we face is to keep children safe without interrupting their schooling,” Fontaine told reporters. “Schools have been targets of attack, so children are scared to go back to the classroom, yet the longer they stay out of school, the greater the risks of being abused, abducted and recruited by armed groups.”

Boko Haram’s insurrection has so far resulted in about 20,000 dead and 2.3 million displaced from their homes, according to Amnesty International and United Nations estimates.

This story made us Stirrers sit up and go HUH, WHAT? Sub Saharan Africans, the most enlightened and wonderfully wonderful ethnic group on the planet are killing, raping, kidnapping, enslaving other Sub Saharan African's and destroying schools, homes and villages in the name of Islam?

Haven't they heard that #BlackLivesMatter or that Islam is the Religion of Peace?

They should make viewing BBC News 24 and BBC current affairs programmes and reading The Guardian or the New York Times compulsory for all Africans in Africa .... sounds like the bastards need some brainwashing about how everything is Whitey's fault.

Or perhaps this is just a case of modern day Africans behaving exactly as their ancestors have since Time began.Maybe it's cultural?