Reuters reported: "for the 1,000 hard-left militants who wreaked havoc on the streets of Hamburg, German Chancellor Angela Merkel could not have chosen a better location to hold the G20 summit." That's because the dense, urban environment allows them to disperse and hide easily, and the city is full symbols of the wealth they detest - from the gleaming 800 million euro ($913 million) Elbphilharmonie concert hall to the shipyards that build luxury yachts.

US news netwok CNN, the world's biggest Fake News generator reported Merkel had chosen Hamburg deliberatelt to humiliate Donald Trump. This is typical of CNN's Fake News, Hamburg was selected as the venue for the summit a year ago, long before Trump was elected US President.

As the July 7-8 summit started on Friday, Black Bloc anarcho - fascists and other anti-capitalist protesters sat in groups on main intersections, blocking streets leading to the summit venue as well as a road used by trucks at Hamburg Port. The previous night they hurled petrol bombs, torched cars and set rubbish on fire.

Police were forced to deploy water cannons, tear gas, and riot control tactics, but could not prevent the destruction as they found themselves underprepared and short-staffed. 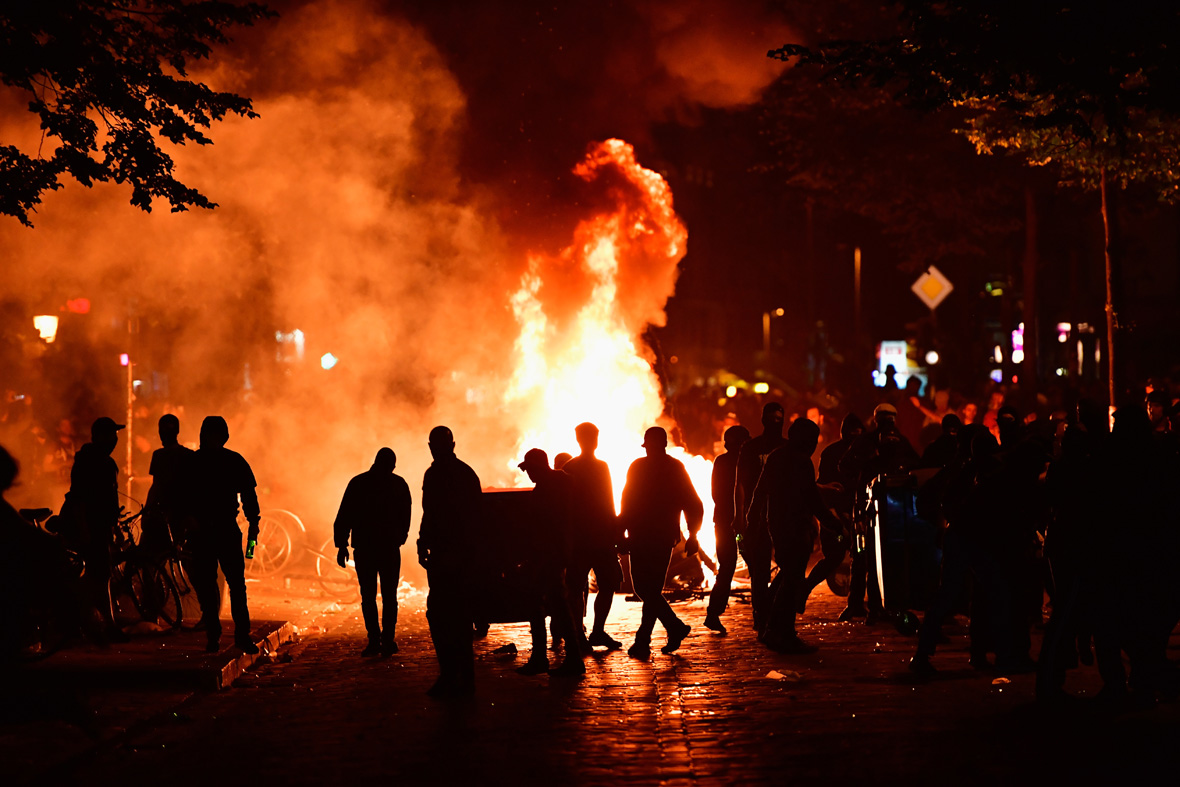 Hamburg last night -picture source: ibtimes
Many fires burned and 130 police officers were injured after "international left-wing extremists" rampaged through Hamburg’s streets in opposition to the summit and presumably democracy itself.

After Thursday night’s so-called "Welcome To Hell" demonstration numerous fires were still burning in the streets on Friday morning and thick black smoke hanging over large parts of the city. This shows the stupidity of the leftist thugs of course, such mindless violence does not affect the world leaders attending the summit, it only hurts the ordinary citizens of Hamburg, the poor in particular.

It wasn't just cars: The Local's Emma Anderson reported that she was walking through the places hit by rioting. She has seen a bank with its windows smashed in, boarded up shops, and more burned out cars.


Hamburg police were forced to call in reinforcements from other parts of Germany, as Chancellor Angela Merkel condemned the violence wrought by demonstrators as "unacceptable". Merkel said she could understand peaceful protests, but demonstrations that "put people’s lives in danger, put the protesters' own lives in danger... are unacceptable". Hundreds of hard-left activists forced US President Donald Trump's wife to cancel her programme for the day.
Ahead of a planned concert this evening for G20 leaders and their spouses at the port city's new landmark Elbphilharmonie concert hall, protesters were concentrating their efforts at blocking access to the site.

These emotionally crippled left wing activists do not care who gets hurt by their irresponsible behaviour. Their motives are entirely selfish, they seek to impose their oppressive, undemocratic solutions on the world in order that they may advance the globalist, authoritarian agenda and to their brainwashed minds the end always justifies the means.


Jew hating Leftie Students Union In New Anti-Semitism Row
Those anti Semites of the The National Union of Students (NUS) are at it again. [ ... ] Hypocrisy and double standards are the stock in trade of the ‘new left’ of course and the anti – Semitism of Labour voters and other younger lefties (University dumbed down airheads who are too historically illiterate to be aware of the role Britain’s Jewish communities played in establishing the Labour Party
Politically Unbiased(!) BBC Launches Left Wing Attack On Donald Trump For Illegal Immigrants Stance
We have mentioned that the terms of publicly funded broadcaster The BBC's charter requires that it be completely fair and non partisan in its political coverage. In recent years however, the BBC's bias towards the politics of the left has become blatant. Furthermore, while BBC bosses try to preach a politically correct message via their comedies and dramas, commercial stations are making better quality programmes.
Home Secretary says Britain Will Outlaw Hate And Extremism
In yet another example of how out of touch with reality our leaders are, Theresa May announced on BBC Radio 4's Today programme that the "British" government's determination to make "hate," "extremism" and "Neo-Nazism" illegal.
Millie Tant, Tatchell's Transphobia and Germain Greer's Big Hairy Smelly Vagina
The well of hypocrisy from which the left, champions of freedom, democracy, equality and free speech in their own estimation, draw their dishonest, self rightoeus views on the world is bottomless, it will never run dry. How else could it have continued to flow during this latest two-faced display of authoritarianism from the lovers of all minoities even when those minoritites hate each other. It is the multual hatred of minorities however that is fragmenting the left.


The Genocide Of Ideas

Interviewed on UK Television the director and former Monty Python Flying Circus member Terry Gilliam said he did not like anything among the recent output from Hollywood. "I don't know what they are about," he complained, "there is a car chase, a few fights, a threat to civilisation and the hero saves the world." Continuing to critique the formulaic Hollywood blockbuster genre Gilliam said films, books and plays ought to be about ideas.

Aid Organisations Using Ebola to Line Their Own Pockets
Just a couple of days ago The Dily Stirrer was slamming charities managers for using our money to line their own pockets. Now in a devastating attack on the charity sector, a Liberian official accuses charities of exploiiting ebola for gain.
Tony Benn's inheritance tax dodge - another leftie hyocrite exposed
Remember the patron saint of loony lefties, Saint Anthony of Wedgewood - Benn, previously known as Viscount Stansgate? Agreeable sort of bloke, pip smokers, great speaker, utterly daft opinions as one would expect from an aristocrat who is so deluded he thinks he understands the working class?
Is It Lack Of Diversity That Makes Lefties Stupid?
Quite a while ago now I wrote a post titled "Is It Lack Of Diversity That Drives Left wing Hate?" It contained these lines: There's an old joke; Q: "Why do teenagers only listen to other teenagers?" A: "Because they're stupid." - Q: "Why are teenagers stupid?" A: Because they only listen to other teenagers." Substitute leftie, liberal, radical or progressive for teenager and that just about sums up the political 'left'

Hate, Hypocrisy and the Left
The Left Are Not Immune To Bigotry
Millie Tant, the radical feminist
Liberal bigots
Liberal extremism
A Liberal's Dilemmas

A Chronicle Of Decay
A Song Of Servitude