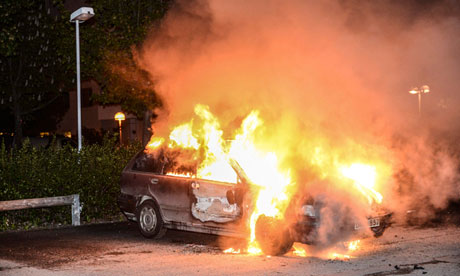 When I worked in Sweden's capital Stockholm in the late 1990s it was one of the diminishing number of cities where a woman could go out aloner at night and feel relitavely safe. Sure there was street crime and sex crime in Sweden but not on the scale I see reported now.

Here's the latest report of a moral outrage, and like so many others it reflects on the loonytoons Open Doors immigration policy insisted upon by the nation's cross party ruling elite. These people of course live in the expensive suburbs and only look down from their ivory towers on a view of Swedish society that has been airbrushed by a liberal media.

Read this story and ask yourself is it ant surprise hardline immigration party the Sweden Democrats are on the rise in Scandinavia's largest nation just as anti - immigration parties are changing the landscape in the United Kingdom (UKIP), France (Front national) Italy (Lega Nord and Five Star movement), Austria, Denmark, Greece, Hungary and, lagging behind somewhat but catching up rapidly, Germany.

from 10news.dk
The risk of being raped in Sweden during one’s lifetime is one out of four (if every raped woman is only raped once), which is probably equal to the risk of being raped in countries in war, such as Iraq or Syria. When it comes to rapes, Islamized Sweden is already in a state of war. Sweden does not publish statistics on immigrant crime. If we want to have a hint about who is committing these tens of thousands of rapes and other types of sexual assaults yearly, we can turn to another Scandinavian country, Sweden’s neighbor Norway, the country most similar to Sweden. Here 100 percent of all attack-rapes (rapes where the attacker and the victim did not know each other beforehand) in the last five years in Oslo were committed by immigrants from “non-Western” countries. In Stavanger, a major Norwegian city, 90 percent of rapes are committed by “immigrants.”

Those statistics, from a Danish television news channel relate to a particularly horrific sexual assault that took place on 19 June near. A group of Muslim men gang-raped the girl while one, who has not been identified, put a gun to her face and threatened to kill her if she did not stop screaming.

When they had finished raping the girl, the gunman pressed the barrel of the weapon into her vagina, causing damage and heavy bleeding. Two of the men then drove the girl to a basement room in Rinkeby where they gang-raped her again.

The following morning the victim escaped from the basement and was found by her father who had been looking for her.

He found her sitting on a lawn, in a state of shock, crying and in panic with bloodied clothes. He told police she seemed scared as hunted prey and just wanted to get away,” the court judgment in the case reads.

The victim was so traumatized by the incident and afraid the perpetrators might attack her again, she has been forced to move to sheltered accommodation.

The District Court of Solna (a working class suburb Stockholm suburb with a large immigrant population) sentenced a number of immigrant men to serve prison sentences for the aggravated rape. One of them, a 21-year-old, was sentenced to five years in prison, while a 19-year-old gets two and a half years in prison. A 18-year-old was sentenced to youth custody for a year and four months since he was under 18 when the crime was committed.

It is, is it not, amazing that only a week before this article was posted, we were reporting the Sweden's social democrat Prime Minister attacking as racists those who criticize his immigration policy of welcoming any murderers, rapists, thieves, extortionists, human traffickers, muggers, drug pushers and general bastards to evade justice in their own nations and go so Sweden (where the intellectual left it seems will grants them licence to brutalise, exploit and steal from working class Swedish people so long as they promise never to commit crimes against the elite.

A Mob Of 'Foreign Youths' Assault 35 Females At Swedish Music Festival
The number of sexual assaults in Europe as a result of the refugee crisis has been something that we have covered extensively, notably the "monstrous" attacks by men "of Arab or North African origin" that occurred on German women in Cologne during a New Year celebration (that led to the members of left wing parties in Germany's ruling coalition actually trying to have the word "rape" removed< from internal reports, because multiculturalism. Were Rotherham Abuse Victims sacrificed To Save The Labour Party
Child abuse in Rochdale
Mose abuse cases in Birmingham, Nottingham, Sheffield, Oxford
Even the political elite are at it in Westminster